3-in-1: L’Oréal, Meta, and HEC Paris Teams Up to Launch an Accelerator for Metaverse-Focused Start-Ups 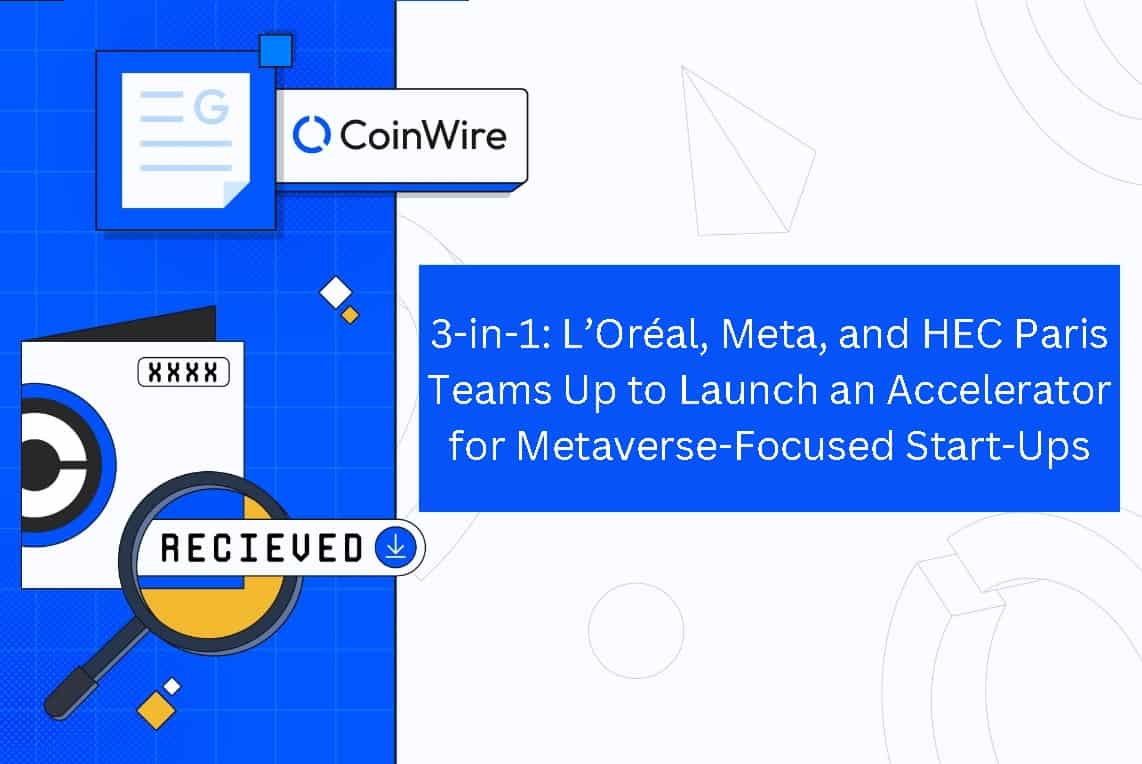 Aiming to help the French cosmetics juggernaut L’Oréal expand its footprint on the Web3 domain, the personal care company L’Oréal teams up with Meta and HEC Paris to create an accelerator for start-ups with a focus on the Metaverse.

L’Oréal, a French personal care giant, joins up with Meta and HEC Paris to develop an accelerator for start-ups with a focus on the Metaverse. It will be headquartered in Meta’s Paris offices, applications for which are due on November 20. Candidates will be chosen by December. Access to mentors and investors is provided via the aforementioned program, which is anticipated to operate from January to June 2023.

The goal of this endeavor, according to the Metaverse website, is to assist the French cosmetics colossus L’Oréal in developing their presence on the Web3 domain. Asmita Dubey, L’Oréal’s chief digital and marketing officer, claimed that this effort will bring together young talent, whom she saw as the future.

She continued by saying that the amount of energy they can produce from that is enormous, and that they want to take use of it. Their firm will profit from the youthful energy that will inspire innovation for their brands and DMI.

Everything You Need to Know About the Startup Acceleration Program

As was already known, L’Oréal and Meta have formally declared their collaboration with HEC Paris to create a business accelerator on the metaverse. The purpose of the aforementioned startup acceleration program is to encourage creativity in the developing metaverse ecosystems.

This program will be situated in Paris at the Station F startup hub, and it is anticipated to run for six months, mostly in January through June of 2023. The program also hopes to bring on board five additional French startup firms, notably those engaged in Web3 initiatives like avatars, inclusion, and the token economy.

As previously indicated, it is anticipated to operate throughout the first half of 2023 and provide consumers with access to both the Reality Labs and Meta’s AI research teams. Additionally, consumers would have access to L’Oréal professionals and advice.

The article claims that the ideas created by taking part in his research would be used by both Meta and L’Oréal projects. They stated on the application site that their mission was to provide entrepreneurs with the funding and visibility they required in order to develop the metaverse of the present.

The participants will be able to propose their ideas in person to Meta and L’Oréal as well as academics, business owners, and investors from HEC Paris through a two-stage procedure in this program. According to Meta’s Vice President for EMEA, the company is honored to collaborate with the L’Oréal group, which has a 110-year history and is still actively influencing the beauty market. She continued by expressing gratitude to their Station F partners, the HEC Paris Incubator, and the outstanding Meta France team.

When they created their first-ever NFT series, which was inspired by the L’Oréal Paris Colour Riche line, the renowned cosmetics business L’Oréal launched their Web3 journey back in 2021. The collection was reportedly centered on empowering women.

The five NFT artists, Amber Vittoria, Arina BB, Hueman, Lili Tae, and Puks, who produced pieces that were inspired by the L’Oréal Paris Reds of Worth by Color Riche lipstick, made it possible to produce the NFT series. While a share of the secondary market sales were given to the Women of Worth, the individual artist was entitled to keep 100% of the main sales.

The L’Oréal-owned brand NYX joined the experience being hosted by the metaverse platform The Sandbox for activation purposes, which aims to promote diversity and inclusiveness, as a result of this NFT initiative. This was followed by a metaverse action.

The U.S. division of L’Oréal formally filed 16 of its brand names’ trademarks in the NFT and metaverse categories back in February of this year, including but not limited to Kiehl’s, It Cosmetics, and Maybelline.

L’Oréal recently announced Camille Kroely as their chief metaverse and Web3 officer in an effort to increase their emphasis on participation with the aid of cutting-edge virtual technology.