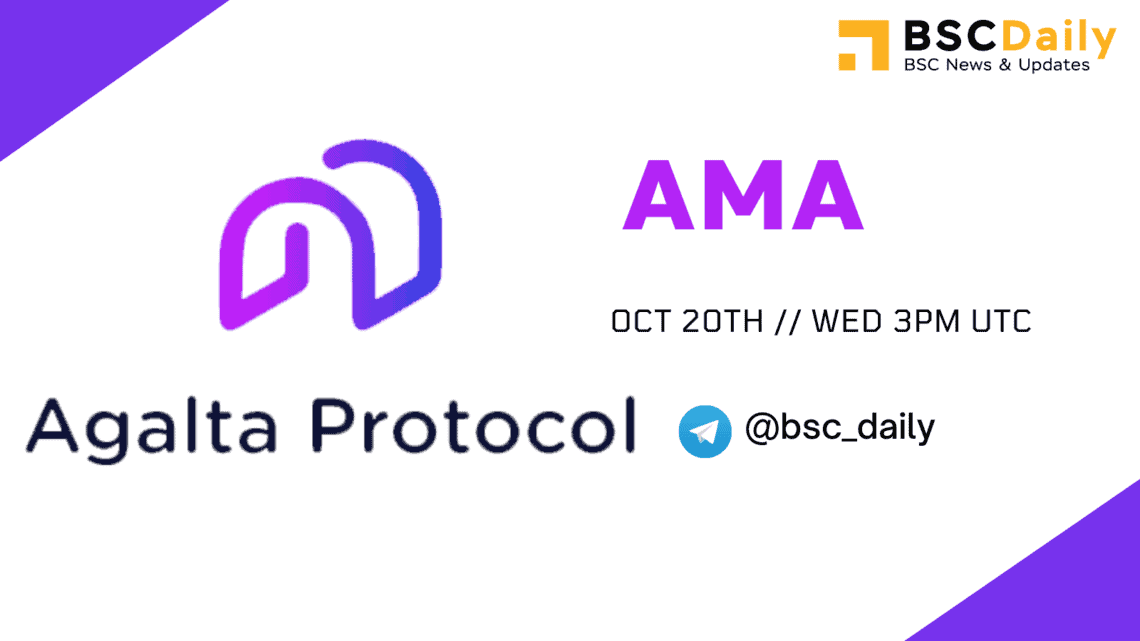 Q1: First of all, could you please make a brief introduction of yourself & your team background.

Peter: Hi，everybody！I’m Peter Wilson, CTO of Agalta Procotol. I have over 10 years of experiences in data science, machine learning, big data and artificial intelligence with a background in finance and extensive experiences in blockchain, Solidity, Python and algorithmic transaction.

Prior to entering blockchain industry, I worked as an analytics director at a large consumer finance company where I led a number of complex international projects and achieved significant results.

Q2: Sounds great! Mr. Wilson is obviously out of the ordinary in this industry. Could you please give us a brief introduction to Agalta Procotol in three to five sentences? What are the technical features of Agalta Procotol?

It is the first batch of layer-2 extension protocol that supports Ethereum, which can effectively solve two core problems of Ethereum congestion and high Gas charges.

It can scale Internet up to the existing and future blockchains through side-chain extension technology, help developers quickly build Dapp applications and carry out large-scale commercial applications.

Q3: There are several eye-catching Layer 2 platforms and protocols in the market, such as Optimistic Rollup and Celer Network. What are the advantages of Agalta Procotol over them?

Peter: We have made a comparison table of all representative projects in the market. As shown in the figure and combined with the technical features just answered, Agalta Protocol has excellent comprehensive performance in terms of security, performance, Gas fee and compatibility.

It can act as the best L2 solution to support high-performance applications under mainnet Ethereum L1.

Peter: Agalta Protocol adopts the underlying technology of AgaltaAPI framework to support ETH and ERC20 tokens on it to quickly top up to Agalta chain.

It supports the latest AMM model for exchange transactions so that all exchanges are done at Layer 2. The high-performance cross-chain net based on AgaltaAPI framework has a theoretical performance of up to 140,000+ TPS which far outperforms performance of existing blockchain transactions.

It supports the latest AMM model for exchange transactions so that all exchanges are done at Layer 2. The high-performance cross-chain net based on AgaltaAPI framework has a theoretical performance of up to 140,000+ TPS which far outperforms performance of existing blockchain transactions.

The increased throughput of Agalta Protocol and advantages of 0 Gas transaction fees enable fast, non-responsive transactions and provide secure, efficient and high-performance underlying transaction support for large-scale, commercialized actual payment scenarios. In the future, more other blockchain solutions will be added and applied to ordinary users in daily life as various industries are inseparable from payment and settlement scenarios.

Q5: I would like to ask some questions about tokens. How is AGT Token enabled in the entire Agalta Protocol ecosystem? And can you introduce the “deflation mechanism” of AGT?

Peter: As an Agalta Protocol Token, Agalta Token not only represents the rights of the holder, but also has practical use-value. AGT can be used in the following scenarios.

Projects and applications accessing Agalta Protocol must be pledged with certain AGT and approved by the community.

To become a relay net node of Agalta Protocol, certain AGT must be pledged and approved by the community.

Users who buy a certain amount of AGT can participate in DAO node election, and the node has the right to propose a proposal. Escalation proposals can be initiated, such as changing commissions, distribution of liquidity mining pools, and Agalta Protocol long-term incentive plans.

All AGT holders have the right to vote, and proposals supported by a majority of votes can be approved and implemented by the development team.

Agalta Protocol will subsequently collect 0.2% of all Layer2 Swap transactions as a Protocol commission, of which 0.1% will be allocated to the liquidity provider and 0.1% will be used for project long-term incentives (repo destruction, etc.)

Q6: As far as I know, Agalta Protocol has been favored by many capital at present. Agalta Protocol ecology’s first decentralized exchange of cross-chain liquidity-AgSwap ecological token, AGT will soon be online on PancakeSwap. Could you please introduce the current progress in detail?

To enrich the ecosystem for AGT, Agalta Foundation owned by Agalta Protocol has announced the launch of AgSwap Eco-Acceleration Program! As part of the Eco-acceleration program, Agalta Foundation will provide AGT with $300,000 liquidity support on PancakeSwap with 10% of the total $3 million investment from Cyber Capital to increase ecological liquidity and token lock-in volume and help AgSwap start the warm-up and project acceleration.

In addition to liquidity support, Agalta Foundation will also support AgSwap in terms of capital, flow and other ecological construction, including but not limited to AgSwap’s token preferential support and investment.

Q7: How can users obtain real-time information about the Agalta Protocol?

Peter: You can join our discord: discord.gg/DkGuJZ97bw

Q8: Where can we find out more about Agalta Protocol on social media?

BSC_Daily Admin: With this, we are now at the end of our AMA session with Agalta Protocol.

Peter: I would like to express my sincere thanks to all community members for joining us.

BSC_Daily Admin: Thank you so much for spending time with our community & all the very best for Agalta Protocol.