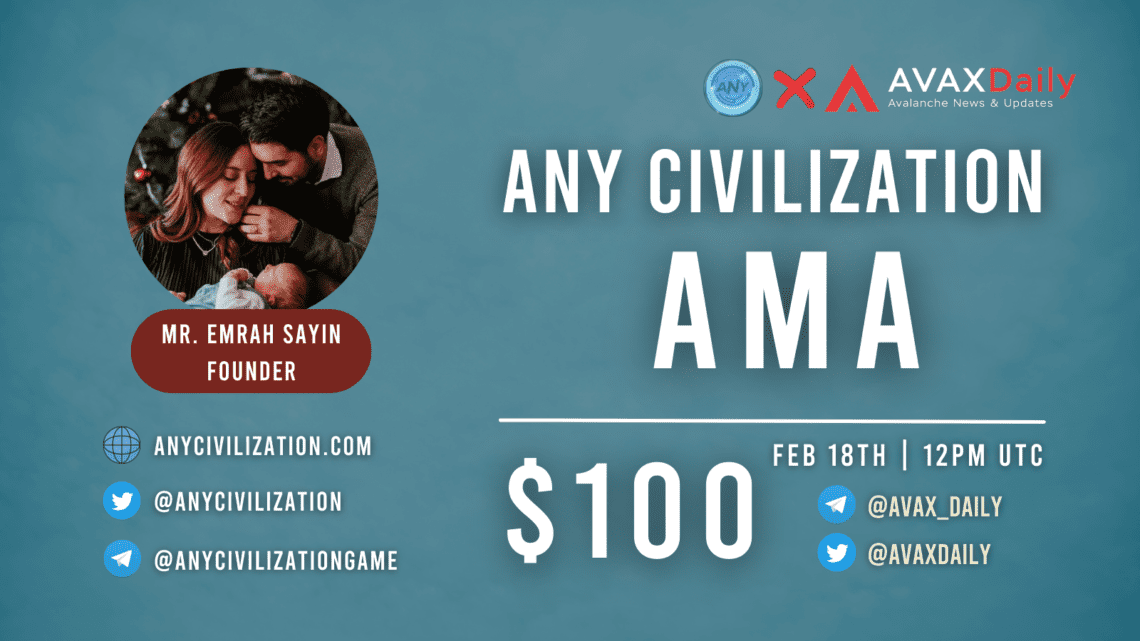 Cryptodaily Admin: Hello everyone and welcome back to another AMA with AVAXDaily 🙌🙌 I’m Daley and I will be your host for today’s AMA with Any Civilization –  a comprehensive strategic development game where citizens reBuild the world together.

Cryptodaily Admin: Fantastic! Let’s not keep everyone waiting Emrah Sayın, do you want to start the AMA right away?

Emrah Sayın: Sure, we can start the AMA.

Q1: Could you tell us a little bit about yourself and your team? What are your past experiences? Are you a fully doxed team?

Emrah Sayın: Well, If I describe myself in short, I’m a blockchain enthusiast, part-time coder, part-time trader and full-time learner. I started this journey alone, as I stated in the website as One-Man Band. Of course, I get assistance from freelance graphic designers and content creators. However, one more developer joined the project yesterday. And now, actively seeking brilliant minds to build an excellent team.

In terms of my past experiences, I used to work in the finance industry (the centralized one) and I’ve been in significant positions from treasury to risk management. Eventually, I decided to use my know-how at a better place and switched to decentralized finance.

Currently, we are building a fully equipped team, which is capable of building everything within the blockchain industry.

Cryptodaily Admin: Wow jack of all trades and master of everything! Since when did you find interests in Blockchain though? Coming from a traditional Finance institution, you must see a real potential for decentralization right?

Emrah Sayın: Well, since 2015 I’ve been trading on behalf of myself. Mostly, Bitcoin. However, it took me several years to make that change. I saw many things inside of the finance industry. And in my opinion, especially banking and finance should be transparent.

Emrah Sayın: Any Civilization is a comprehensive strategic development game where citizens reBuidl the world together. The game consists 2 phases; Phase I: Buried Alive! is an Interactive IGO, Phase II: Return of Genus Humanum! is establishing a new life on earth. The idea of a play-to-earn development game has always been in my mind since 2015, the year when I bought my first Bitcoin. After 6  years I decided to pursue my dreams and started to build the Any Civilization Game.

Cryptodaily Admin: So during that 6 years, you must have accumulated tons of experience You’re a “full-time learner” though so I won’t question how haha

Emrah Sayın: Yes, within those years, I completed 2 master degrees in Finance 🙂

Q3: So what about the gameplay then? What can we do in the game?

About Any Civilization Games game play:

First phase of Any Civilization is a gamification of IGO. Citizens produce 4 different resources: Water, Food, Electricity, and Ore by working at production facilities. These resources can be used to fulfill Any Citizens’ needs or crafting new items by combining them at R&D facility. The item created from R&D facility, which is ERC1155 Multi-Token, will have one of these attributes; Farming, Production, Construction, and Transportation. Also, they will improve their skills by working and doing R&D. More importantly, they are going to earn Any Game Token.

The idea behind gameplay was inspired from game theory. Any Civilization’s game mechanism is built on an innovative wealth distribution algorithm, which has R&D based macro economy and self-improvement based micro economy. In order to maximize the return, the skills of citizens must be even. So, if players make right decisions during the Phase 1, they can maximize their allowance of Any Game Token.

During the second phase, Any Citizens claim their Territories, where they build their houses, farms, or production facilities in order to develop their civilizations with the resources they produce during Phase 1.

We are working hard to make Phase 2 fully on chain real life experience. If I give you a little hint about what I mean by realistic, last week I had a meeting with Chainlink team. They are going to provide us real time weather data through blockchain, which will be used for game mechanism especially for farming.😎

Cryptodaily Admin: That’s nice! I don’t know how the real-life weather affects the crops in-game though, the only thing I’m scared of is having people in super cold weather, I don’t think anything can grow in that. Also, the game is focused on being realistic, so could there be crop-stealing, fighting for territories, etc?

Emrah Sayın: Since we want to create realistic games, there should be some challenges and some freedom to do whatever you want. However, the second phase of the game will be modeled as a DAO and the DAO decides the consequences of Citizens actions.

Q4: Let’s dive into your tokens $ANY. Can you share with us your tokenomics? And what are some of $ANY use cases?

Emrah Sayın: Before diving into Any Game Token, I would like to mention that we are establishing a parent entity called Any Game Projects, which aims to create innovative blockchain applications. And

Any Civilization Game is and always will be the primary project of Any Game Projects, which has a significant role for tokenomics.

In terms of upcoming use cases, there is a DeFi project that we are working on, which is a decentralized option market for synthetic assets. Users can write any kind of option contracts as long as it has on-chain historical data.

Cryptodaily Admin: Do you have any links so that people can learn more about the tokenomics of Any Games Projects?

There is also information on in-game tokenomics.

Q5: What has Any Civilization done that set you guys apart from other NFT GameFi projects? How can you ensure investors that you guys are here for the long run?

Emrah Sayın: Any Civilization Game is the first and unique project of Any Game Projects. What makes it unique is an Interactive IGO, in which players start playing games to earn Any Game Token (ANY) and other game items. In terms of IGO, the price of ANY will be calculated based on the number of players and their decisions. Therefore, everything is all up to the players.

We are at the very beginning of the journey, there are many more ideas waiting to be built by Any Game Projects. As we are growing as a team, current projects’ improvements and number of new innovative project developments will increase.

Cryptodaily Admin: Also the mathematical equations to calculate ANY can also be found in their tokenomics, check it out people

Q6: Please walk us through your roadmap. What is the next thing that’s going to be implemented in-game right now?

Emrah Sayın: We are developing a built-in DEX for the game. A special DEX is going to be implemented to Phase 1 of the game, where Any Citizens can exchange their resources that they produce. Base currency of the DEX will be $ANY.

Cryptodaily Admin: So you’re building an entire ecosystem with $ANY is the base token. Will you consider integrating the Any Game Projects and the DEX together?

Emrah Sayın: Yes, we are trying to expand use cases of $ANY as much as we can. Well, it could be integrated, however, separate DEX for as another entity would be better for Any Game Projects.

Q7: A Mint date is coming up real soon, what are we minting and how can we join?

As a player, the first thing that you have to do is mint one of Any Citizen. Citizens are the main character of the Any Civilization Game, created with ERC721 NFT Standard. Unlike many other NFTs, each Citizen begins their life with the same level of skills. Any Citizen has 3 different skills; Sustainability Skill, Management Skill and Curiosity Skill. These skills will be improved by working at production facilities or doing R&D. In order to keep your citizens alive, you must either buy a Cluster or join one of them.

Minting price of Any Citizen is 0.1 Avax.

Clusters are liveable caves located underneath Mount Ava that keep Any Citizens alive till the back to the ground, which were created with ERC721 NFT Standard. Clusters’ main attribute is their population size. Cluster owners have special privileges, during Phase I and Phase II. First of all, 298.000 ANY will be allocated to the Cluster per Any Citizen. Half of the reward will be given to the Cluster owner, and the other half will be distributed to Any Citizens of the Cluster based on the reward calculation method. Secondly, Each Cluster owner will be airdropped as a precious production site, whose size is determined by Cluster’s population, at the beginning of Phase II: Return of Genus Humanum!

Maximum number of Clusters is limited to 10,000. There are varying minting prices for Clusters in order to encourage players to adopt the game early.

Q8: Where can we find out more about Any Civilization?

Cryptodaily Admin:With this we are now at the end of our AMA session with Any Civilization 🔥🔥🔥

Emrah Sayın: Many thanks to you Daley and Avax Daily Family for this great season.

Cryptodaily Admin: Anytime! It has been a pleasure having you here with us, thank you so much for spending time with us and all the best for Any Civilization!