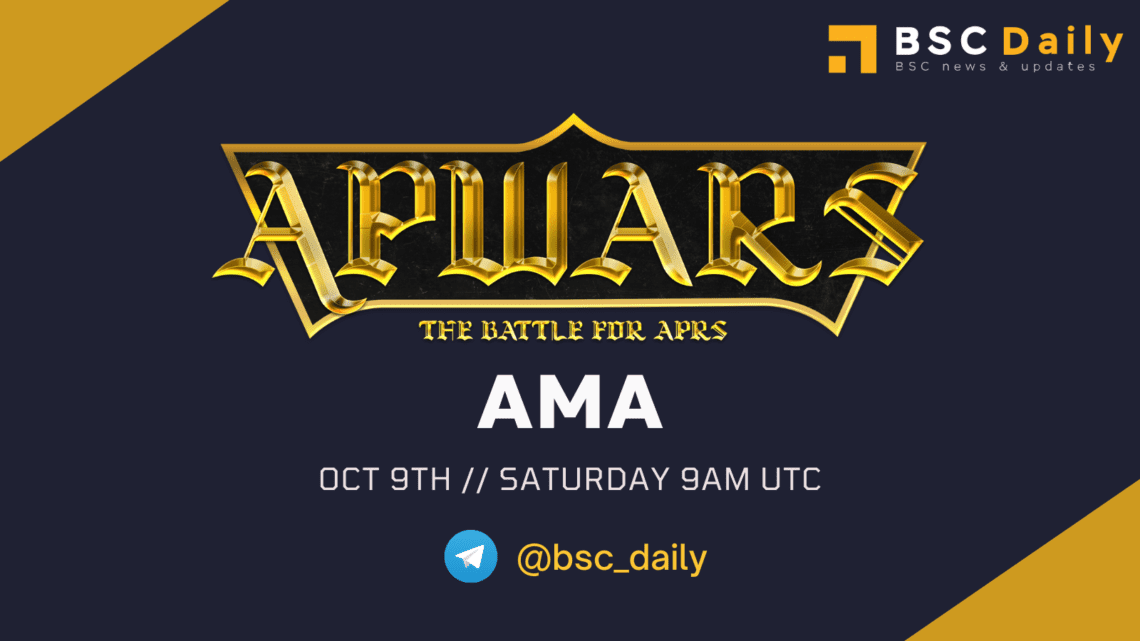 Arthas APWars:  I am excited!

Arthas APWars: Let’s do it.

Q1: Now to start the AMA, team APWars please have a quick introduction to the community, the background of the team behind this project.

Arthas APWars: The team is composed by me (I am a paladin) the great orc Vulug and 10 more people that work from development to communications.

Most members are seniors in this blockchain space. With 5+ years of experience developing protocols. The APWars team is Anonymous. We have been working for 6 months in the game which is a fair launch, bootstrapped protocol.

Q2: Is APWars a game or a gamified farming protocol?

Arthas APWars: APWars is an RPG game that uses blockchain technology to enable decentralized ownership of game items. We are on the first phase of the game in which the farming is used to distribute game items to the community, this is the way that the developers experimented with at the start but eventually the farming aspect of APWars will be gradually extinguished as the development roadmap of game is accomplished. We are launching the Arcadia Expansion which is a new phase of the game in which we are focusing on interaction and game experience now.

Q3: What are the dynamics of the new weapons you implemented and when will we be able to use them? What difference can it make to the dynamics of war? Could you say anything about the other weapons that will be launched?

Arthas APWars: In APWars there is a dynamic of token war. You can pick a faction and join a battle to conquer a treasury. Weapons enhance the power of your troops. The differences between weapons are related to attributes they enhance. Some will enhance defense and others will enhance attack.

Q4: What is Arcadia and what is wLAND for?

Arthas APWars: Arcadia is the name given to the expansion of the APWars game and it consists of providing a game world with land that can be purchased to collect resources, build foundations and create an economic and military game system. wLAND is a game token with immediate utility as it can be used to buy a land space in Arcadia to build foundations and interact with other players. If you want to acquire wLAND, go to: https://app.apwars.farm/arcadia-expansion

Q5: What are foundations, how are they divided and what are they for?

If you don’t want to offer any game services to other players, but want to build your civilization, villages are enough. But if you want to offer services, and receive game items for them, bet on the rest of the foundations either.

Foundations have their specifications:

Villages: you can build your civilization.

Temples: you control the region and receive offers.

Markets: you become the enabler of inter-village commerce.

Hideouts: you keep things safe and receive game items for the service.

Watchtowers: you can offer military intelligence services and receive game items for this service

Q6: In Arcadia, what are the troops’ roles and what about the heroes? Is there a link between these two components?

Arthas APWars: Troops will be used to defend and attack villages, the heroes will be used in the same manner, but they can enhance other attributes non-related to combat.

Q7: Can you share your Roadmap & Marketing strategy in the next 6 months?

Arthas APWars: Sure, for the next 6 months we will be focused on finishing the Arcadia Expansion, a world where you can build your village and fight battles for supremacy. It is a game that evolves gathering resources, raising an army and taking care of your domestic economy. The sale of lands started just Yesterday. Most of it is not available anymore.

Q8: Where can we find out more about APWars on social media?

Arthas APWars: The most important links are:

Join our community NOW on Telegram!

BSC_Daily Admin: With this, we are now at the end of our AMA session with APWars.

Arthas APWars: I want to say that we are working hard to create one of the most authentic blockchain games of all time. Enjoy.

BSC_Daily Admin: Thank you so much for spending time with our community & all the very best for APWars.