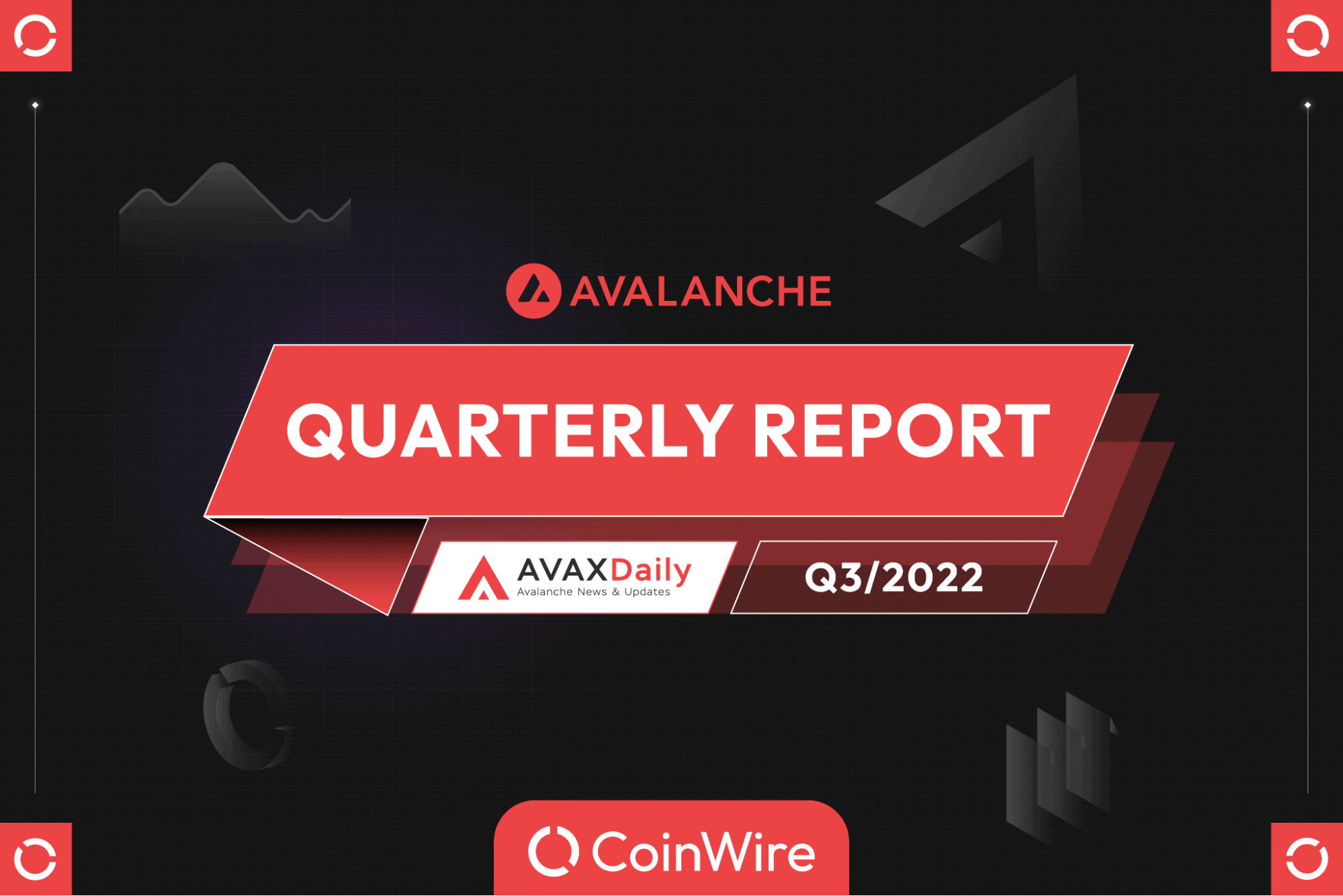 Q3 was still a pretty bleak quarter for the cryptocurrency market in general and Avalanche is no exception. This ecosystem still maintains its long-term vision, while the market is gloomy, Avalabs continues to improve over what was still weak in the past, strengthening cooperation with other ecosystems and organizations.

From an investor perspective, this quarter is not very attractive when it comes to price indicators and total value lock. However, exciting things are still waiting ahead.

More details on what’s notable in the last quarter. Let’s dive into our article. 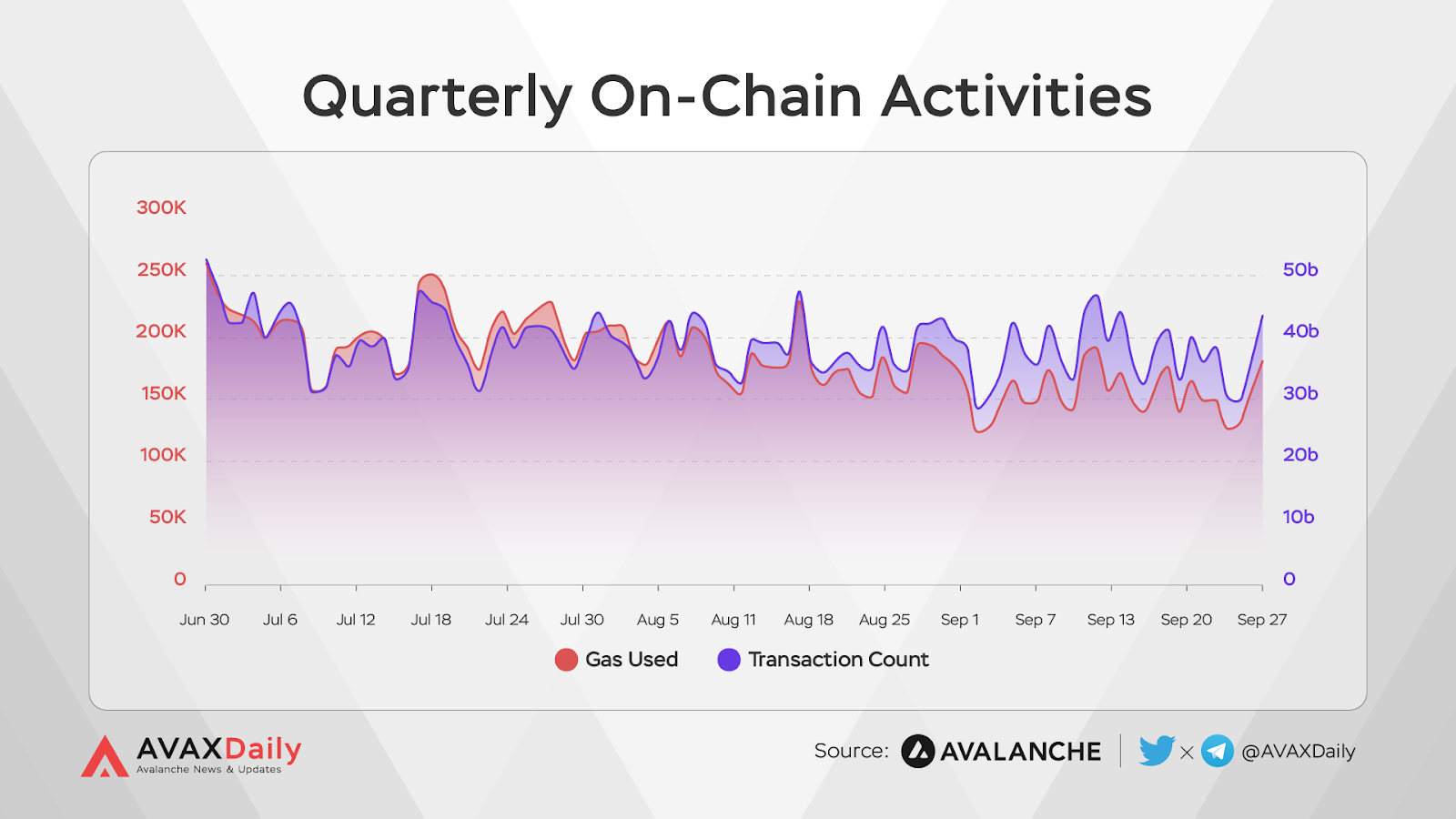 Last quarter witnessed a breakthrough growth in transaction volume as well as gas used. According to the collected data, this spike in transactions and gas used came from the DFK subnet (the blockchain of DeFi Kingdom) when the assets of this project moved to Avalanche.

The txns and gas used indexes continuously peaked. DFK subnet accounts for nearly 90% of this total. C-Chain and Swimmer Network make up the remaining 10%, and volatility is also roughly equal.

However, if we look more closely, we see an unusual thing that the number of active users in the quarter did not fluctuate strongly, even tended to decrease. This leads to skepticism as to whether the spike in transactions is coming from new users.

To further clarify this issue, we will have a combined analysis of the total value lock index in different sections.

Daily transaction count reached ATH on 17 September, 2022 with over 3,916,369 transactions including all subnets. DFK Subnet accounted for ~92% of total txn and the remaining 8% belonged to C-Chain and Swimmer Network respectively.

Similar to the transaction volume, the amount of gas used also increased dramatically to ATH on the next 2 days with 722,479,684,418 gas. The amount of gas from DFK also accounts for more than 90% of the total gas used.

The number of addresses is in the range of 36,000-40,000 and there is no spike. Compared to the sudden growth from gas used and txn count, the number of active users also showed a slight downtrend.

Compared to the previous quarter’s peak of 1625, the number of validators showed a downtrend, the ATL of last quarter was 1211 validators on Aug 2.

The number of delegators shows an uptrend, even reaching ATH continuously this September and currently has 33,192 delegators.

Validators in blockchain are usually groups and organizations that hold large amounts of AVAX to operate masternodes. The fact that the number of validators decreases and the number of delegators increases shows that the number of short-term holders with a small amount of AVAX is growing rapidly. This could be due to the AVAX price movement or the unattractive validator rewards during the downtrend.

In addition to important events, the Avalabs team also has important technical updates to Avalanche blockchain in the last quarter:

Compared to the previous quarter, the social indicators give much more positive signals, the social mentions, engagements, and dominance indexes have all doubled. However, compared to the whole market, the Avalanche ecosystem is no longer noticed by most users when the altrank level is only 110 compared to 11 before.

The TVL index of Avalanche ecosystem is quite negative as the main trend is still down. The amount of TVL is currently at the lowest level in the past 1 year, decreasing more than 7 times with a peak of 12.15B. Alpha projects are also continuously withdrawing TVL despite their efforts to retain cash flow with incentive and reward activities.

During this quarter, there were many cross-chain projects extending operations to the Avalanche grid. This brings in new users and money for this ecosystem, but puts a lot of pressure on native projects when the market share is divided.

Avalanche utility is almost as good as Ethereum’s. However, Avalanche’s utility is expected to improve and most likely be better than Ethereum in the near future. Avalanche is used relatively less in transactions, likely because Ethereum is relatively older.

While Avalanche’s available supply percentage of AVAX coins is at 41%, Ethereum’s max supply is unknown/unlimited. As for inflation, Avalanche has a ten higher inflation rate compared to Ethereum. Avalanche and Ethereum have staking capabilities providing 9% APY for AVAX and 5% APY for ETH.

According to data from Nansen, compared to the previous quarter when Avalanche’s trading volume was close to that of Ethereum, this quarter showed a downward trend. However, it should be noted carefully that the C-Chain index in C-Chain only accounts for ~5% of the total transaction volume of the whole Avalanche ecosystem.

However, compared to other ecosystems, Avalanche’s on-chain signals are not good as the total value lock has dropped to the lowest level in the past 1 year, showing the unattractiveness of DeFi projects. for users. The transaction volume, gas fees, and users of C-Chain have not increased, even tended to decrease.

In order to attract more money and users into the ecosystem, DeFi projects need to have attractive and long-term reward programs during the bear market period; research and design new products that bring benefits to their token model. Compared to the alpha projects in BNB chain and Ethereum, the projects in Avalanche have shortened the product gap, but the gap in TVL, Txn, and users is still quite far.

Avalanche’s GameFi this quarter witnessed the successful launch of AAA games, bringing excellent gaming experiences to users with unreal engine 5. Although gamefi is forecasted to be a “golden egg”, however, the market is in the adjustment phase, so more or less projects are still affected. A notable category is move-to-earn with 2 projects Step App and Runblox, true to users’ expectations and expectations, Step App has successfully deployed its own blockchain, Step Network, with full infrastructures to develop with the vision of an ecosystem dedicated to improving user health. Runblox evolves as part of Bloxverse and has been successfully deployed on Apple watch. Upcoming projects that have fully built infrastructure on subnets or have a stable number of players will be bright spots.

NFT is not Avalanche’s bright spot, in terms of sales volume and transaction volume, Avalanche is behind many blockchains. Potential NFT projects only account for very little when they actually have use cases when used in DeFi, GameFi protocols. And Avalanche also does not have a popular collection like Ethereum. This is an unattractive point for users, but it is a fertile ground for famous NFT artists.

With the upcoming release of Banff: Elastic Subnet, an update helps Subnet creators activate Proof-of-Stake validation and uptime-based rewards using their own token on their own Subnet. Anyone can validate a Subnet by staking its token on the P-Chain. Subnets that choose to enable Elastic Validation must undergo a one-time transformation into a new type of Subnet called an Elastic Subnet.

By giving creators more options to customize their subnets, more subnets will be deployed on Avalanche. Creators can choose to build their own blockchain for different purposes, even a private blockchain for business and school purposes.

Avalanche’s long-term vision is still to focus on developing the ecosystem, expanding cooperation with parties, and helping projects develop on Avalanche. Currently, it can be said that this is an ecosystem that is not as vibrant as Ethereum, but is growing more and more. This shows that Avalabs is aiming for a long-term and stable development, not a quick boom and death.

Next quarter promises to have more positive information about the development of Avalanche, especially when the Elastic Subnets update is officially released and expected to significantly impact Subnet adoption. However, the general market and the crypto market, in particular, are going through difficult times due to economic tightening. So the expectation for exponential growth is unlikely to happen.

AvaxDaily does not recommend that any cryptocurrency should be bought, sold, or held by you. Do conduct your own due diligent research and consult your financial advisor before making any investment decisions.