Bashoswap – A Perfect and Amazing DEX on Cardano 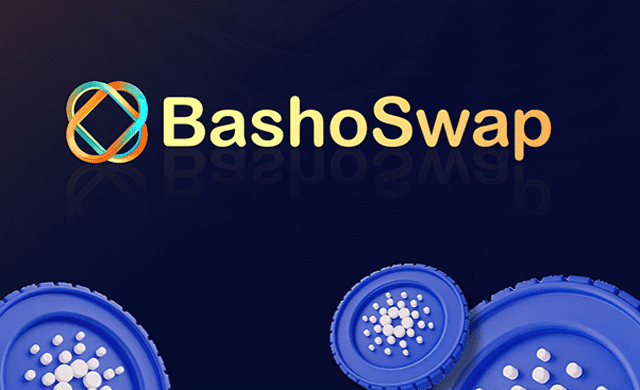 With the ever-expanding Cardano community and hundreds of new Cardano Tokens being minted every day, there is no doubt that there is a tremendous and irrefutable demand for a decentralized and non-custodial exchange platform where these tokens may be traded without fear of losing their value.

Despite the fact that Cardano is one of the most successful blockchain networks, with a market capitalization of over $30 billion as of this writing, it lacks a fully functional, transparent, and smooth native Decentralized Exchange (DEX) like those found in other blockchain networks.

Bashoswap is about to defy convention. They’ve officially entered the competition to become one of Cardano’s top decentralized exchanges.

Bashoswap is a decentralized exchange built on top of the Cardano blockchain. This project intends to bring Cardano-based projects to the fore, which will have far-reaching effects on the Cardano ecosystem.

Behind the BashoSwap project is a team of experienced developers and project managers. The core founding team is composed of developers and crypto enthusiasts with a deep understanding of the native assets, smart contracts on Cardano, and the overall blockchain ecosystem.

One of the goals of Bashoswap was to provide a scalable and trustworthy medium of exchange for Cardano Native Tokens while also building a long-term ecosystem around utility tokens.

From front-end engineers to back-end technicians to advisers, the Bashoswap team has more than 5 years of expertise establishing and developing Blockchain-based financial products.

This project has a lot of amazing potential, but it also has a lot of stringent conditions that must be met in order to establish a decentralized exchange on Cardano. The Cardano ecosystem has a lot of unknowns and undiscovered territory, therefore now is a good moment to launch the project.

Team Bashoswap claims that they would approach development plans with caution but urgency in order to provide a fully functional and scaled Dex in as little as 9 months.

Bashoswap’s objective is to rise to the challenge by ensuring that the Cardano Ecosystem is fully prepared to onboard new crypto traders, blockchain enthusiasts, and Cardano startup companies looking for liquidity to help them grow and scale their businesses.

Bashoswap creates a fully functional and scalable Cardano DEX with a variety of trading options, including limit and stop orders. Their De-Fi ecosystem will be a multi-protocol bundle with clear and simple usability and long-term viability.

Other Protocols in Development by the Bashoswap Team:

➢ Basho Launchpad: A Fully Cardano Native Token Launchpad that would provide new and budding Cardano projects with the necessary push to get off the ground in a completely decentralized manner, allowing not only big hedge funds and investors, but also all types of retail investors to support new projects from their seed stages.

➢ Basho Stake: A Cardano native token staking platform that allows token holders to stake their tokens in order to receive reward tokens and to vote on projects that will be funded and incubated.

➢ Basho Lock: Once the project is fully operational, project owners can lock their Tokens and LP tokens to further boost confidence and transparency.

500 million BASH tokens have been created, which will never be issued again, and will gradually become available to the general public as the Bashoswap protocol develops.

(Please note that there is no ongoing public sale; anybody offering to sell you $Bash Token is a scammer; always double-check information on the bashoswap.finance website.)

Users will be able to see their vested $BASH tokens and the date on which they will be able to withdraw them from the vesting smart contract a week after the Private sale concludes.

Tokens from the Private Sale will be frozen for two months before being distributed in five epochs over the course of 120 days.

For any project constructing a big protocol capable of handling thousands, if not millions, of transactions per day, a thorough consideration of tokens and the services they provide is necessary. The $BASH token, the utility token that powers the Bashoswap Ecosystem, lies at the heart of the Bashoswap protocol.

1. Here’s a quick rundown of its main functions:

▪ Utility Token— $BASH tokens are utilized across the Bashoswap ecosystem for a variety of purposes, including lower fees, guaranteed slots, and IDO whitelist allocation.

▪ Governance — In a decentralized network, members will employ $BASH coins to manage the Basho Protocol, assuring unanimity in decision-making.
Users will be rewarded for contributing to the development of the Bashoswap protocol and submitting improvements through the governance DAO.
They are dedicated to delivering equitable IDO launches and a protocol that is truly community-driven.

▪ Profit Sharing — Bashoswap Early Adopters, who clearly play a critical part in our project’s objective to become the top Cardano Dex while also lowering the entry hurdles for blockchain enthusiasts.
Early Adopters (Private Sale Investors) will get Founder NFTs as a token of their participation in the Bashoswap ecosystem’s growth.
When our goods are released on the Cardano mainnet, they will inevitably produce revenue, which we will distribute in a decentralized way using smart contracts, with a portion of the revenues distributed among the Founders NFT holders.

Functionality to be expected:

▪ Staking — Buyers and sellers can use smart contracts to secure their $BASH tokens in the staking mechanism.

2. Where can I acquire $BASH tokens?

Bashoswap is conducting a private offering for whitelisted investors who signed up for the sale on April 5th.

Because $BASH is a Cardano native coin, it may be stored in a Cardano compatible wallet such as Yoroi, Daedalus, or Nami.

Follow Basho Swap’s official social channels to get the latest updates on hot news about the project!