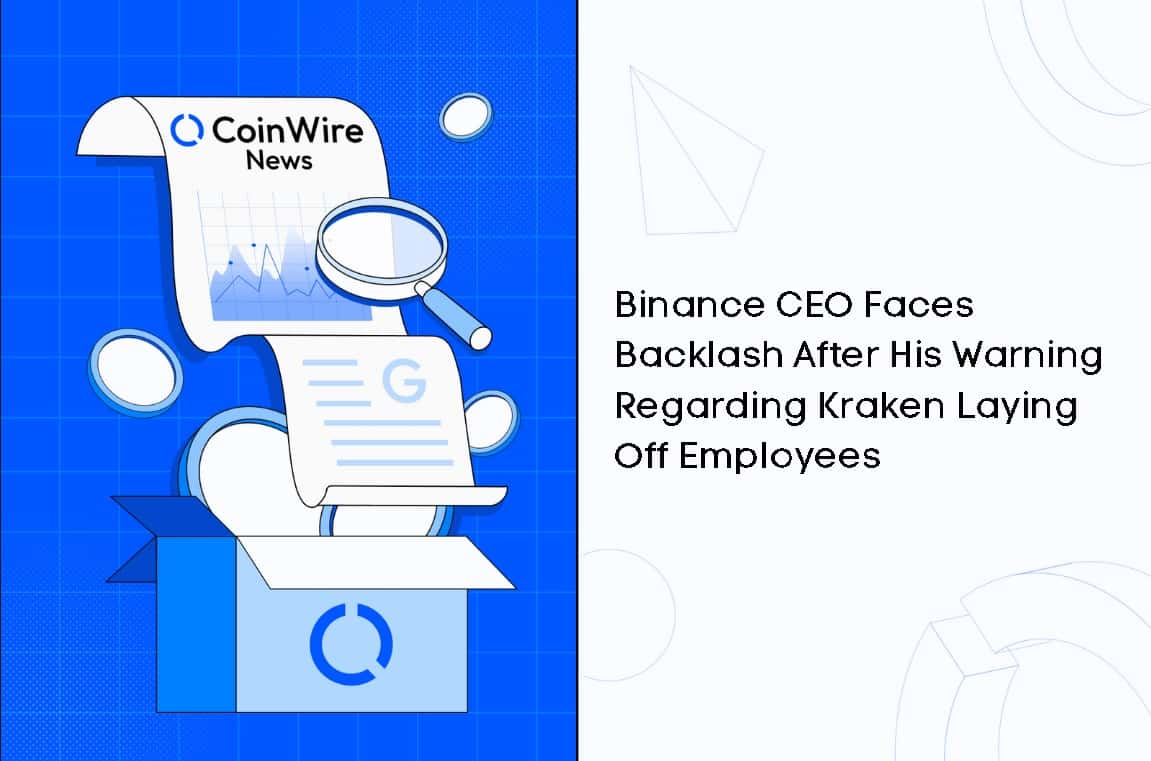 The cryptocurrency exchange platform Kraken ended November with a difficult decision, announcing that it would be reducing its global workforce by about 1,100 employees. An estimated 30% of the workforce will be let go, according to the report. The decision in question is relevant given the state of the market.

It should be recalled that Jesse Powell, the platform’s CEO and co-founder, stated a year ago that the company needed to triple its workforce due to the rapidly expanding crypto ecosystem and the current team reduction. Now, the aforementioned CEO asserts that although they were able to hold out, the recent developments in the industry woes have reduced near-term optimism about a cryptocurrency rebound.

The report claims that the current market situation’s low trading volumes and few client sign-ups have forced the aforementioned cryptocurrency exchange platform to reduce expenses, which has led to employee layoffs and an avoidance of significant marketing commitments.

The relevant cryptocurrency exchange platform then argued that the aforementioned changes brought about by their choice are essential to maintaining their business over the long term while also continuing to develop top-tier products and services in niche markets that are most valuable to their respective customers.

The company made it clear that after receiving a severance package that included, but was not limited to, separation pay covering 16 weeks of base pay, performance bonuses, four months of healthcare coverage with counseling, immigration support, and career support, the employees decided to leave.

Kraken stated earlier this year that they are continually filling over 500 roles in their various departments despite the ongoing market downturn. Many other significant blockchain companies, including but not limited to Coinbase and BlockFi, announced the termination of their staff around this time.

Kraken went on to say that they are not changing their hiring strategy, so firing employees was not originally part of their plan. They continued by saying that they need to fill a number of positions throughout the year and even described the current state of the market as a “great opportunity” to separate genuine mission supporters from candidates who are only interested in the hype.

Crypto Companies in the Midst of Crypto Winter

Many cryptocurrency businesses have suffered as a result of FTX’s demise. Some, like BlockFi, which has significant exposure to FTX, have already filed for Chapter 11 bankruptcy. Others, like FTX, have suspended their operations.

In order to survive the current crypto winter, Lemon Cash, an Argentinean cryptocurrency exchange, has also already said goodbye to 38% of its staff. Additionally, last month, the decentralized NFT protocol Metaplex let go of a number of its staff members.

Additionally, Kraken recently made the announcement that they would also be firing a number of staff members. According to a recent report published in the middle of November, the crypto industry experienced 4,695 layoffs, or 4% of all tech industry layoffs.

Changpeng Zhao, the CEO of Binance, the largest cryptocurrency exchange platform, has come under fire recently for changing his mind at the last minute about assisting the struggling exchange platform, FTX. Due to the layoffs, the CEO is currently facing backlash once more for his indirect criticism of Kraken. The aforementioned CEO has advised users to be wary of exchanges that offer high APY but also have layoffs.

The crypto community has accused him of doing this by spreading FUD, or Fear, Uncertainty, and Doubt, about his rivals. Then, in light of Elon Musk’s acquisition, questions were directed at him regarding Twitter’s most recent employee layoffs. It was known that the said CEO had invested in Twitter.

The CEO later deleted his tweet, breaking what the community refers to as a cycle in which the CEO would tweet things to rival companies in an effort to sow discord, only to later take them down after receiving criticism.

It should be noted that even earlier, the aforementioned CEO had tweeted about an exchange that had moved significant amounts of cryptocurrency before or after displaying their wallet addresses, which he then characterized as a blatant sign of a problem.

The following Monday, a whale reported that a wallet had transferred more than $2 billion worth of bitcoin from Binance to an unidentified wallet. The wallet quickly defended itself, saying that the transfer was necessary for an audit, but he was criticized for the irony. The community believes that the Binance is a ticking time bomb as a result of this.