Binance Halts Withdrawals of Stablecoin USDC as it Faces FUD 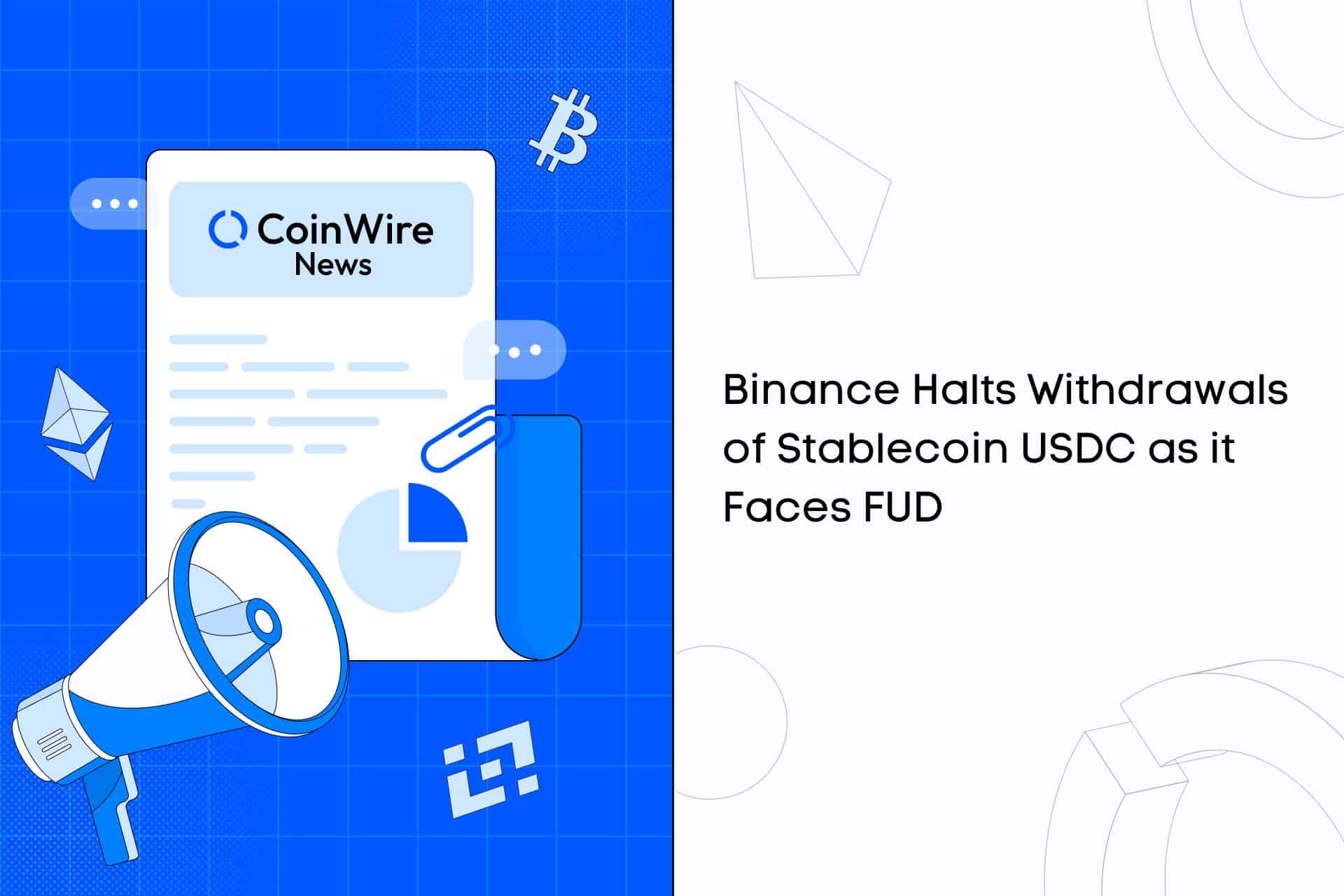 Growing investor concerns stemming from the collapse of FTX and not expanding to the report of a potential criminal investigation from the U.S. government led the largest cryptocurrency exchange in the world, Binance, announced that it will be temporarily halting the withdrawals of the stablecoin USDC while it conducts a “token swap.”

As was already mentioned, a temporary suspension of USDC withdrawals will occur while the relevant platform conducts the “token swap,” which is known as the procedure of exchanging one cryptocurrency for another without the use of fiat money.

The CEO of Binance, Changpeng Zhao, tweeted earlier on Tuesday about the observed rise in USDC withdrawals on their platform, which could indicate that users are moving their funds to another platform.

The CEO continued by saying that any transfers from the stablecoin PAX and Binance’s own token BUSD into USDC require routing through a New York bank that is not yet operational. Zhao went on to say that users may choose to exchange their PAX and BUSD into USDC in order to withdraw their funds from Binance.

According to reports, Binance will use this token swap to quickly acquire more USDC while the banks are closed. The CEO went on to say that users would still be able to withdraw and deposit other stablecoins like BUSD and tether in addition to USDC.

Stopping withdrawals is not a good sign for cryptocurrency businesses; earlier this year, Celsius, a platform for crypto loans, had to pause withdrawals before ultimately declaring bankruptcy.

Although there was no issue comparable to that on Binance, $1.6 billion was seen to be leaving the platform, according to the crypto data provider Nansen. The aforementioned business further asserted that Binance’s platform hosts assets worth more than $60 billion.

The Effect of FTX Collapse on Investors

The largest cryptocurrency exchange platform in the world has been in the spotlight ever since FTX collapsed. After declining to assist FTX and selling its stake in the troubled platform, it is believed that these actions drove the platform over a precipice.

Due to this, a number of investors have asked Binance to be more transparent with its operations. The platform responded to their request and, just last month, it published a proof of reserve claiming to have a reserve ratio of 101%, or, to put it another way, enough assets to cover customer deposits.

Unfortunately, the platform has been criticized for not going far enough in assuring the platform’s collateral with the issued proof of reserves. The five-page report of Mazars, the auditing company Binance used for its proof of reserves, responded to this criticism by stating that Binance does not express an opinion or an assurance conclusion.

Investors are paying attention to reports about the United States in addition to the aforementioned problems. Prosecutors with the Department of Justice disagree on how to proceed after looking into Binance criminally. According to the report, Binance’s compliance with anti-money laundering laws is the subject of the investigation, according to people with knowledge of the situation.

Binance promptly refuted this claim in a tweet, saying that “Reuters has it wrong again,” that they have no knowledge of the inner workings of the US Justice Department, and that if they did, it would be appropriate for them to comment if we did.

In addition to the aforementioned problems, Binance, the biggest cryptocurrency exchange in the world, is accused of spreading “fear, uncertainty, and doubt” (FUD) about a number of its business operations. In the recent weeks, Binance has already dominated the headlines for days, and its CEO also uses Twitter to defend their position after engaging in numerous debates with various people.

One of the most well-known instances is on December 8, when Jesse Powell, CEO of Kraken, continued the CEX Wars through a series of tweets, highlighting several warning signs he had noticed in Binance’s most recent Proof of Reserve audit by Mazars.

Along with the CEO of Kraken, John Reed Stark, the former head of the SEC’s Internet Enforcement Office, has used his platform to spread misinformation about Binance’s Proof of Reserves and secretive management.

In the midst of all of this, the CEO of Binance took to Twitter to publicly reassure investors and users. Although it didn’t stop there, a few days after Binance and Kevin O’Leary got into a heated argument, they had to deal with a Reuters FUD report about money laundering.