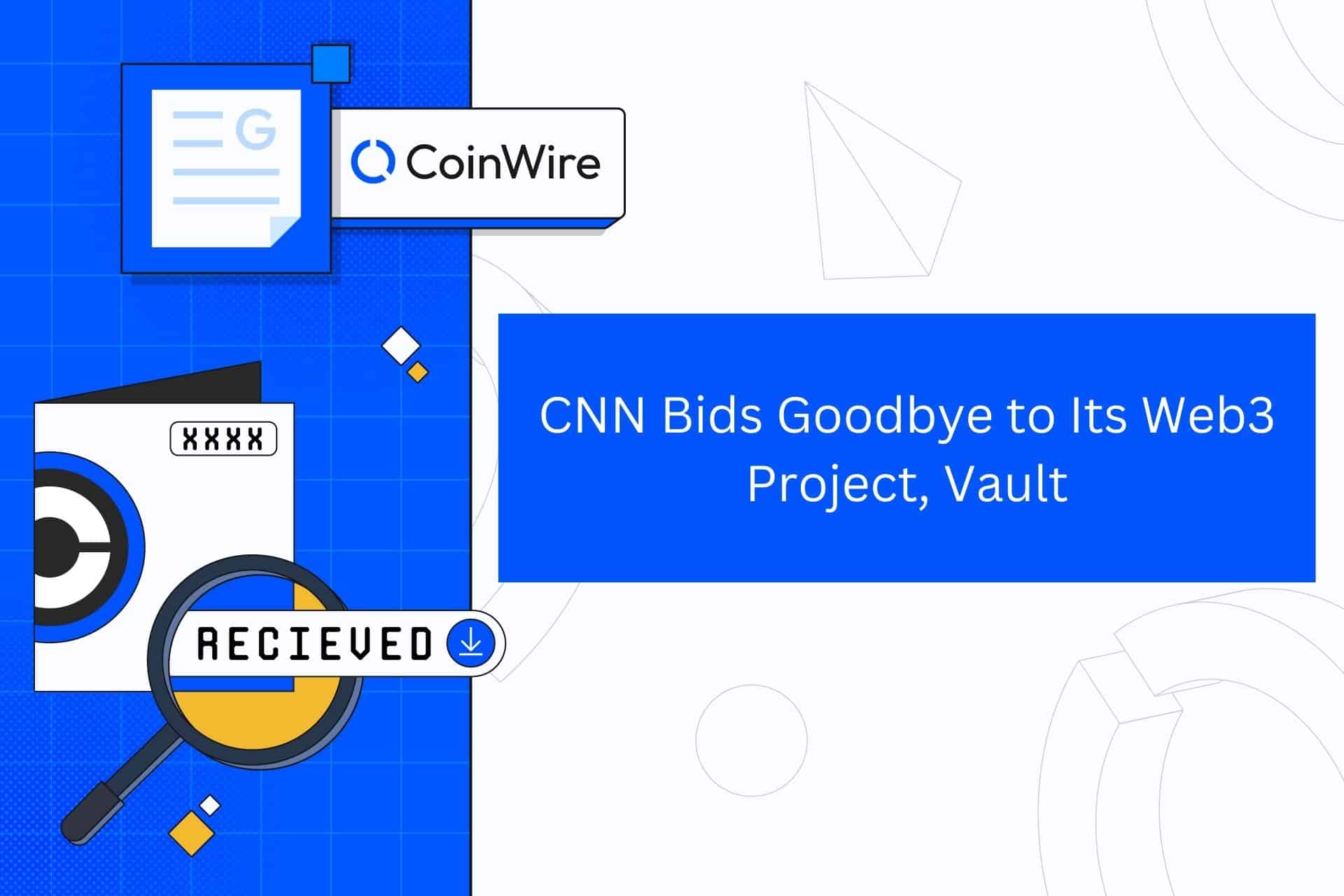 CNN officially announced the end of its Web3 experiment, Vault, on Monday evening, October 10. The announcement was made via tweet, but the reason for the said “goodbye” was not made public.

CNN’s Web3 venture, Vault, debuted last year as an NFT collection commemorating major news events. The team behind the Web3 venture stated that the project was intended to be a six-week experiment, but it grew due to the support and engagement that it received.

Last year, the news outlet assured the public that Vault would be around for more than six weeks and promised that its “future drops” would cover a broader range of topics and formats as it adapted to its collector community.

The story began in the summer of 2021, when CNN unveiled the Vault, which is said to be a marketplace for its own NFTs, allowing users to own a piece of history. The collection included major news events such as NBA Top Shot, where it minted CNN reports of key events or artistic interpretations inspired by them into digital collectibles that owners could display or trade with others, similar to baseball cards.

Back then, cryptocurrency prices were skyrocketing, and other digital assets such as NFTs were performing admirably. However, when 2022 began, the market went dark, and a lot obviously changed as the “crypto winter” set in. However, according to an April report by the Press Gazette, CNN allegedly made more than $300,000 from the sales of Vault.

Vault was introduced by CNN in the summer of 2021, and they marketed their project as a “chance” for collectors to own a piece of history, as the NFT collection was said to feature major news events.

The Vault project was reportedly built on the Flow blockchain, and users did not need crypto to purchase an NFT; instead, they only needed to create a digital wallet with Blocto to make transactions, and payments were collected through Stripe.

Everything appeared to be going well with CNN’s Web3 venture, which, as previously stated, lasted longer than expected (six weeks). That is why the abrupt closure of the project on Vault’s Discord server, as well as the company’s Twitter announcement, shocked their community, and some users even accused them of pulling the rug out from under them.

Users allegedly came to this conclusion while the Vault was still teasing some upcoming features and drops just last month, and now CNN is saying good-by to it. Furthermore, some of the documents hosted on the project’s website include some exclusive CNN perks and merchandise that are marked as “coming soon.”

To calm down the community that they had built but had left shocked and hanging, a certain “Jayson” from CNN confirmed on Discord that a certain type of “distribution” to compensate those who purchased NFTs should be expected. It could be LOW tokens or stablecoins that are deposited directly into the wallet of each collector.

He stated that they are still working on some additional details for this “distribution,” but he did state that the distribution amount would be roughly 20% of the original mint price for each Vault NFT owned by the respective collector. Furthermore, he assured that the NFT collections would continue to exist and that the Vault Marketplace would remain operational.

CNN’s plan, however, did not appear to be sufficient to put collectors at ease, and the community did not stop talking about it. According to one user, the company cannot simply say goodbye to NFTs because without the community and utility, it is no longer an NFT but rather a mere digital copy.

Another user has reported a problem that is allegedly caused by the Vault’s reliance on the Flow blockchain. Whereas withdrawals in USDC stablecoin, which is pegged to the value of the US dollar, are permitted with a minimum of $10 per transaction and a $4 processing fee, according to Flow’s support documents. The cheapest NFTs on CNN’s marketplace, however, are listed for $19; if someone owns that and wishes to withdraw it, they are allegedly left with nothing.

What adds to the community’s skepticism about the alleged rug pull on this project is that CNN was still encouraging its community members to buy more tokens in order to have enough to access upcoming events just last month.

This includes the Art of Voting NFT Series, which was supposed to take place on November 8th, this year. Users were required to own at least one NFT from a specific set in order to gain access to the Art of Voting set and other unspecified “exclusive benefits.”

Aside from that, Vault’s documentation includes a section describing the fabled “utility,” as well as a section listing Exclusive CNN Perks and Exclusive CNN Vault Merch as “coming soon.” Furthermore, their roadmap promised features such as the ability to mint any CNN article as an NFT later this year if desired.