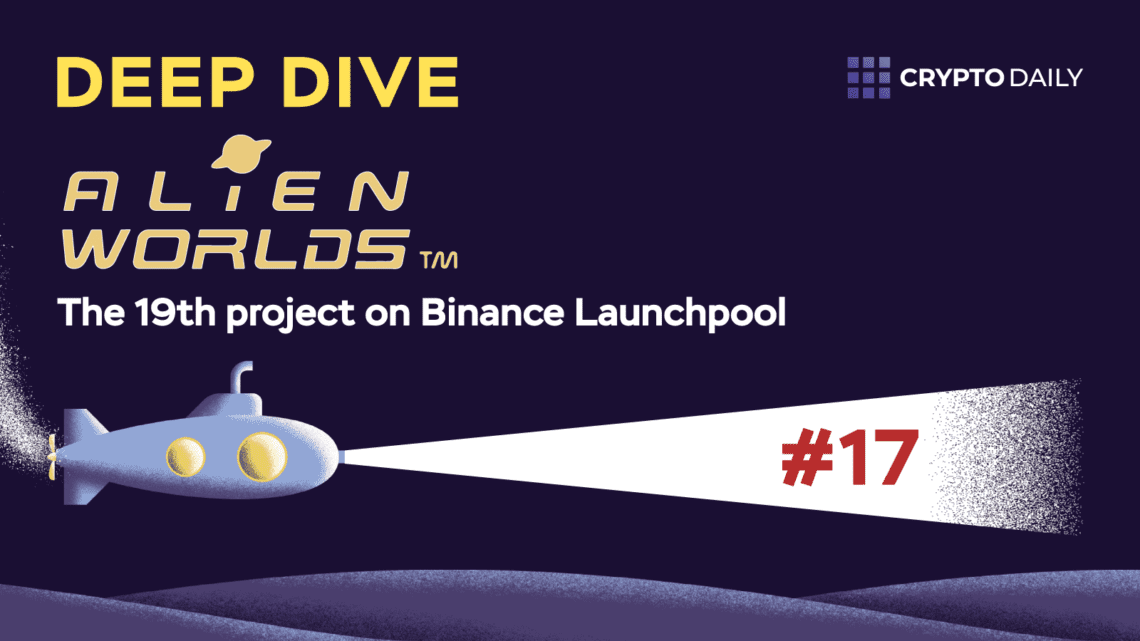 Alien Worlds is a game platform built on blockchain. Simulating an interplanetary world where players compete for scarce resources, Trilium (TLM), players use Trilium to power up the game by staking and voting in the  Planet Decentralized Autonomous Organizations (Planet DAOs). Basically, it’s pretty much like Star Wars; planets and players compete for TLM, leading to stiff competition and cooperation between the teams.

Alien Worlds is a game in which you play as a space explorer, aka a miner. Players are equipped with a trio of miners, and they can choose a planet to explore and mine Trillium (TLM). 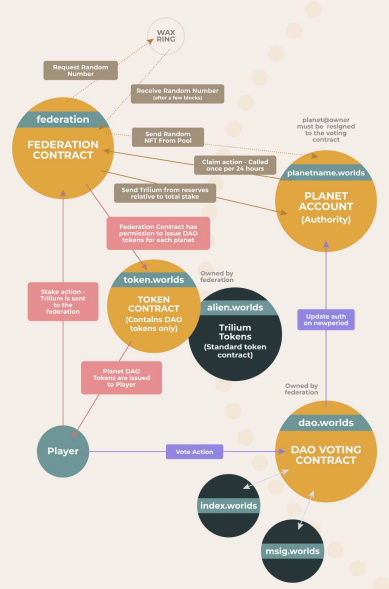 Firstly, you need to make a WAX.io Wallet. WAX is the world’s leading decentralized video game and entertainment network focused on NFT. You can create a wallet by linking your Google, Facebook, or Twitter account or creating a new WAX account. After setting up the WAX Wallet, you will be asked to grant Alien World a set of permissions to use, then deposit some WAXP (WAX tokens), and you can start mining.

Planets in the game

When starting the game, players have to pick a planet in the list on UI. On each planet, there are Mining Pot (show player can mine how much TLM in the planet) and Fill rate (The rate at which the planet replenishes the TLM). Players should choose a planet with the balance of Mining Pot and Fill Rate.

NFTs in the game

When mining TLM, users have a chance to be rewarded with special items, including tools,  weapons, and avatars. These items are NFTs which are harder to obtain than TLM because of their rarity. You can use Atomic Hub Marketplace to trade these items and earn real money from them.

Lands in the game

In every planet of Alien Worlds, there are Lands. Lands play an essential factor in mining. Each Land consists of three main stats: Chance to get NFT, Amount of TLM users will get for mining, and Charge Time Multiplier.

Commission lands determine how much landowners get from all land miners. Therefore users usually look for lands with lower commissions. The rarer the lands, the more likely all states will be. The downside is that they also have higher charging times, and users must wait longer before mining again. The Rarity goes in the following order: Common (Gray), Rare (Blue), Epic (Purple), and Legendary (Yellow)

Tools in the game

Players implement to mine by tools such as Mining power, NFT Chance, Charge Time, and POW (Proof of Work). The Rarity goes in the following order: Abundant (Light Gray), Common (Gray), Rare (Blue), Epic (Purple), Legendary (Yellow), and Mythical (Red). Mythical Tools are scarce, so the price of them is always very high.

Players can stake TLM to a planet in order to increase the total number of available Mining pots on the planet. The more players mine on a particular planet, the lower the mining pot, so staking is essential to keep the economy steady.

Basically, players have to mine to get TLM and wait for their tools to recharge. The time players must wait to mine and the amount of TLM, NFT, POW they get, relying on their Tools and Land, but the time they spend mining, depending on the random and their physical facilities.

Paper: Papers are publicly available and transparent. Details can be found at Technical Blueprint.

Github: Public and regularly updated. The last update was just a few days ago. Details can be found at Alien Worlds · GitHub.

They spent most of the allocation for Participation Reward (50%) while the team only had 7.5%, which shows that the Alien Worlds team really wants to build a long-term and effective project, rather than likely pump trick.

Trilium (TLM) is the primary utility and local currency in the game, which plays the main role in the functioning of the Alien Worlds metaverse platform.  The Token usage will be as follows:

Planet Governance: TLM holders can stake TLM to participate in the governance of planets and other potential rewards.

Staking: Players can stake TLM on a selected planet to participate in TLM or NFT mining.

In-Game Currency: The TLM is the currency in Alien Worlds, where players use TLM to buy or update items, participate in battle access and other in-game activities.

Gameplay Incentives: Active users will earn TLM as a reward for participating in the development of in-game activities and ecosystems.

Purchase NFTs: Players can purchase in-game items that are minted as NFTs, or mined with TLM associated with matches or in-game requests. 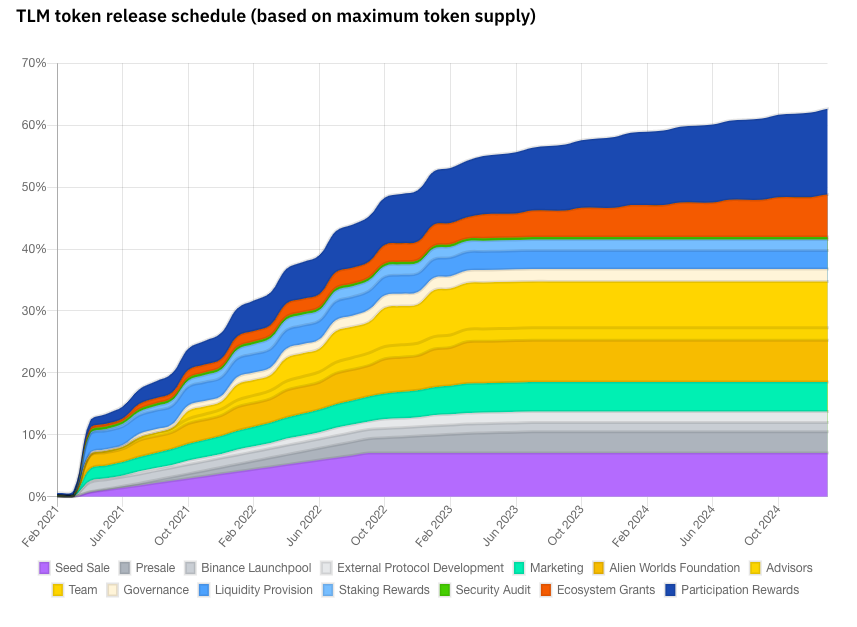 The chart above includes all future tokens issued at a decreasing rate of inflation. It does not take into account the maximum TLM drop due to token burn events. Participation Reward tokens will continue to be issued after January 2025.

The price of TLM has dropped by 86% since listing, from 2.3 on April 7th to 0.3 on July 28th. The reason can be explained that TLM appeared on the market before the sharp decline of the crypto market lasted until now. So this devaluation may be temporary; maybe after the market grows again and TLM is listed on more reputable exchanges like Coinbase or Coinbase pro, its price will increase strongly again.

Alien Worlds NFTs are supported on BSC and WAX, with NFT image data stored on a peer-to-peer Interplanetary File System (IPFS). This ensures that image data remains decentralized while allowing external applications to connect to on-chain functions and data to facilitate the following operations: User-generated contests based on Alien Worlds mining; reduced user-defined NFTs for specific groups of Land NFT holders, and external game servers, such as a Minecraft server, connects to Alien Worlds gameplay and rewards.

Telegram: Contact @AlienWorldsOffical – There are more than 23,000 active members.

Alien Worlds – Medium  – Regularly post updates on the progress of the project and guide to play the game.

After rounds of fundraising in March 22nd, Alience has successfully raised $2M from famous investment funds and Venture Capital.

Alien World is one of the fastest-growing games in the blockchain industry. It attracts players by basic and familiar concepts to the old games, requiring less money to begin but having the ability to earn real money. However, the disadvantage of this game is that the graphics are still not beautiful, the interface is still simple, which will make players quickly get bored. So let’s wait and see how the next updates can improve. Wish you happy gaming!