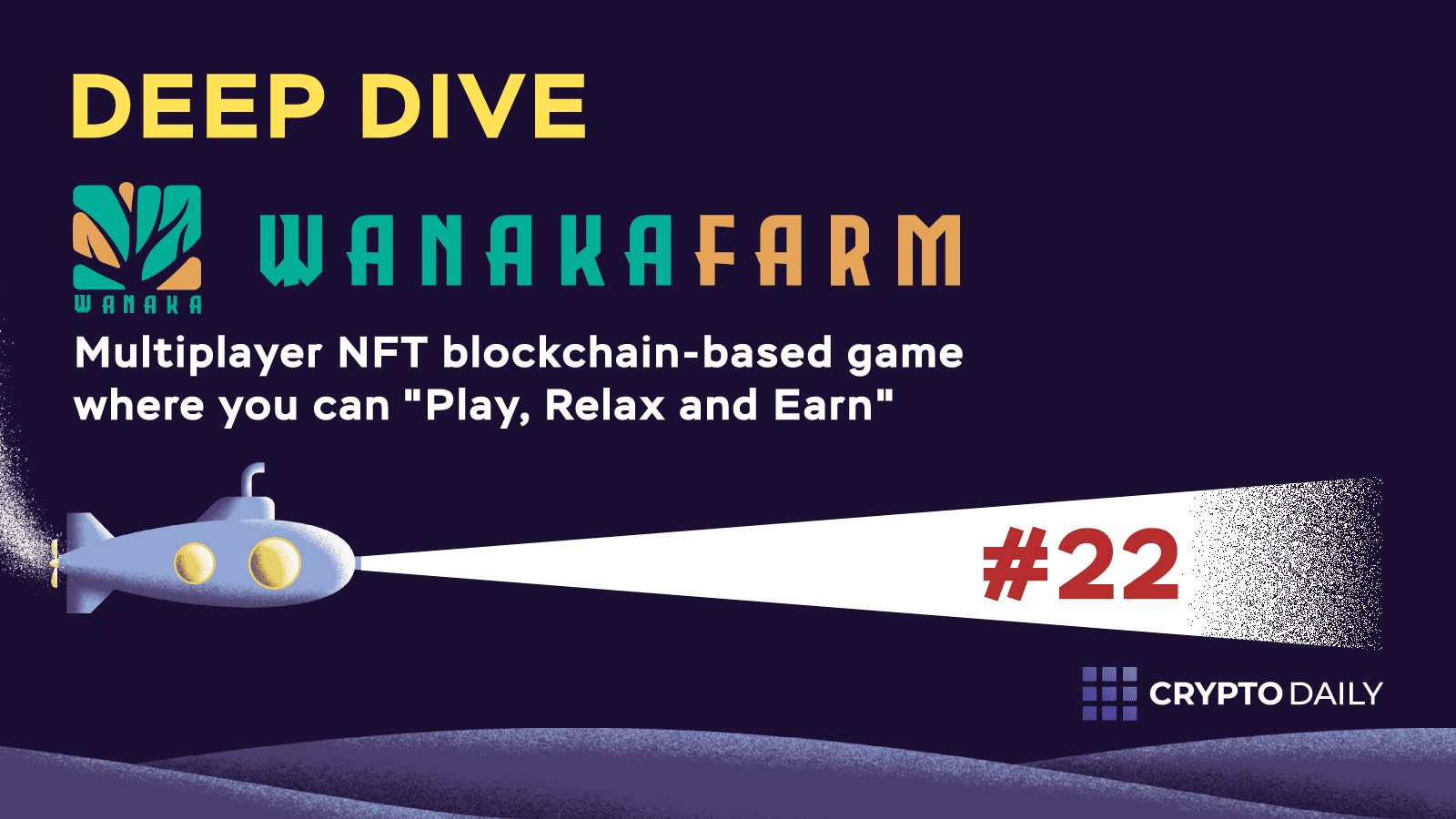 Our childhood is probably more or less attached to farming games. This is a basic game, easy to play but no less attractive. One of the advantages, also disadvantages of this game is that it takes a lot of time. We have to wait to grow, harvest, or propagate, which causes us to spend a lot of time on games but get nothing of value except relaxation. Perhaps also derived from those paint points, Wanaka Farm was born to turn the time spent on your virtual farm into valuable money.

In this game,  players have multiple ways to earn money, such as selling their items at Wanatrade, completing quests, participating in competitions, staking WANA tokens, contributing to DAO’s structure’s governance, and lucky lotto rewards. Besides entertainment elements such as gameplay, sound, events, and the coming time, the project will bring VR/AR technology into the game to build the best experience for users. Are all of the above interesting things enough to attract you? Let’s find out with us what else is good about Wanaka Farm!

Wanaka Farm is inspired by a dreamy beautiful town from the South Island of New Zealand called Wanaka, making players feel more realistic. In the game, players will play a role of a happy farmer by cultivating lands, crop farming, breeding pets, and decorating their own virtual land. The more people participate with different cultures and personalities, the more diverse for Wanaka metaverse.

In the initial stages, players can play both on desktop computers and mobile phones to experience and control the game characters in 2D. The ambition of Wanaka is available on PlayStation with AR/VR compatible mode in the next short time. AR and VR compatibility is targeted to become a reality in Q2 2022, and PlayStation VR integration in Q3 2022.

After creating, the account will be linked to a wallet (like Metamask), from where players will store their in-game items and confirm transactions. Each player will represent a farmer Wanaka with an avatar in which the players can modify or interact with each other.

Each player has attributed a limited working energy per day. Fortunately, you can improve your productivity by making use of surplus energy from other players, or those who don’t have land to farm.

To make a farm, the first thing you need is seeds or pets. You can buy them at Wanaka Farm’s game store or purchase them from other players at Wanaka Farm’s marketplace. Players can create a genetically modified seed by putting items into the breeding house.

Harvested items harvested from the farm will be owned by players in the form of NFT. They can also be used to produce other products in the Production House like the below image.

Another way to earn profits is to combine seeds or pets to create new breeds defined by their parents’ genes. For creating new seed items, players need to combine “harvested items.” Unfortunately, not all combined seeds will produce genetically modified seed items, depending on their probabilities of success. Players can earn between 2 to 4 new seeds by breeding.

Paper: Papers are publicly available and transparent. Details can be found at Wanaka GreenPaper.

The product status: Currently still developing. You can read the roadmap below:

Tokens are allocated reasonably and logically. They spend the majority on activities in the game and the project; allocation for funding rounds only accounts for a low rate (Below 10%), which means the project focuses on developing the product, not only for raising funds.

$WANA is the primary utility and local currency in the game, which plays the main role in the functioning of the $WANA.  The Token usage will be as follows:

Staking: You can stake your WANA to earn more passive revenue.

Governance: Users can participate in the decentralized organisation (DAO) of Wanaka Farm by WANA. Voters also receive rewards for their contribution to the development of Wanaka.

Because WANA has not been a public sale on popular exchanges today, there is not much about Network Valuation & Asset Pricing. However, a few metrics can help your investment decision: WANA Private Sale price is $0.024, the partnership is $0.010, and the upcoming IDO is $0.040.

Up to now, Wanaka is expected to IDO on two platforms: Duckstarter and Oxbull.Tech.

For Duckstarter, DuckDao will organize the Refundable IDO (R-IDO) on behalf of Wanaka Farm on the DuckStarter platform on the 29th of August with whitelisting starting from 22nd August to 27th August. Details will be announced on 22nd August.

For Oxbull.Tech, The Public-sale pool shall be opened to the qualified public after the allocated time for Tier 1, and Tier 2 investors end. Contributions are on a first-come, first-serve (FCFS) basis on the 29th Aug between 1400–1430 UTC.

Wanaka is opening a Whitelist for a community round on Oxbull. You can fill out the form here.

Currently, Wanaka has two great advantages in terms of timing. Firstly, Wanaka’s Market Cap is tiny compared to current competitors such as MyNeighborAlice ($400M) or Axie Infinity ($4.7B), which means WANA’s future price growth potential is quite large. Secondly, this is a good time when the trend of NFT games is becoming popular and explosive, leading to big money flows here. That could increase the price of the game’s tokens.

You can get lands by participating in events or purchasing in a secondary market like Wanaka’s in-game marketplace, Mochi.Market or Binance NFT. After purchasing land, players are free to decorate their own land to their liking with various in-game items such as houses, lakes, decorations, pets, plants, and other items that can be additionally purchased on the market.

With the limited supply and creating as NFT, each land is unique with its respective characteristics, set randomly or depending on its rarity. There are 4 types of land that players can acquire from dropping events, including Basic lands, Lake, Forest, and Sea.

Experiences are acquired by farming and/or petting. As in traditional farming games, the longer a player spends time farming or doing in-game activities, the higher the level. When you increase your level, you may unlock new growing items farmed on that land and open up more farming slots.

A special feature of this game is the function of renting land so that you can earn extra income. Lease or land acquisition transactions are guaranteed by smart contracts, thus increasing reliability, minimizing fraud and bad behavior in the game.

(The multiple life cycles of an item)

These include items and products throughout your growing process, starting with seeds, growing, harvesting, building, and some items from special events like Christmas, Lunar New Year, and Valentine’s Day. Some activities happen in Breeding or Production House.

Each of them has its own functions; you can use them for your farm or sell them in Wanaka’s marketplace to earn a profit.

Telegram: Contact @WanakaOfficial – There are more than 30,600 active members.

Medium: Wanaka Farm – Regularly post updates on the progress of the project and guide to play the game.

For a new project which has not yet been any complete product like Wanaka Farm. This can be a huge advantage that helps the value of WANA and the project itself fly to the moon.

Wanaka Farm has attracted a significant number of well-known Venture Capitals and blockchain projects in the market, notably Kyber Alumni Fund, Moonwhale, Lua Ventures, DuckDao, and so on. However, the information about the investments was not disclosed.

In particular, Wanaka Farm recently established a partnership with TK Ventures, a venture capital firm focusing exclusively on early-stage decentralized finance, NFT, and Web3 projects. Their mission is to become a great supporter of ambitious founders in blockchain who are building the foundation of the decentralized web.

Wanaka Farm’s team is mainly technology experts experienced in operating and building Blockchain projects. Some are game developers, so they have the ability and vision to realize a finished game product. The others are VR/AR developers, demonstrating their great commitment and ambition in applying VR/AR to Wanaka Farm, making Wanaka Universe more realistic and alive.

Wanaka Farm is promised to be a game with attractive content, bringing more entertaining and thrilling elements to players. Based on the above analysis, we can believe that Wanaka Farm will develop more strongly in the future. The biggest difference compared to games in the same genre is the Play to earn mechanism, making playing games no longer just for entertainment but can earn high profits. However, with the current explosion of DeFi game trends, players should consider carefully before participating to avoid losing money. Wish you happy gaming!