by Crypto Daily Team
in News 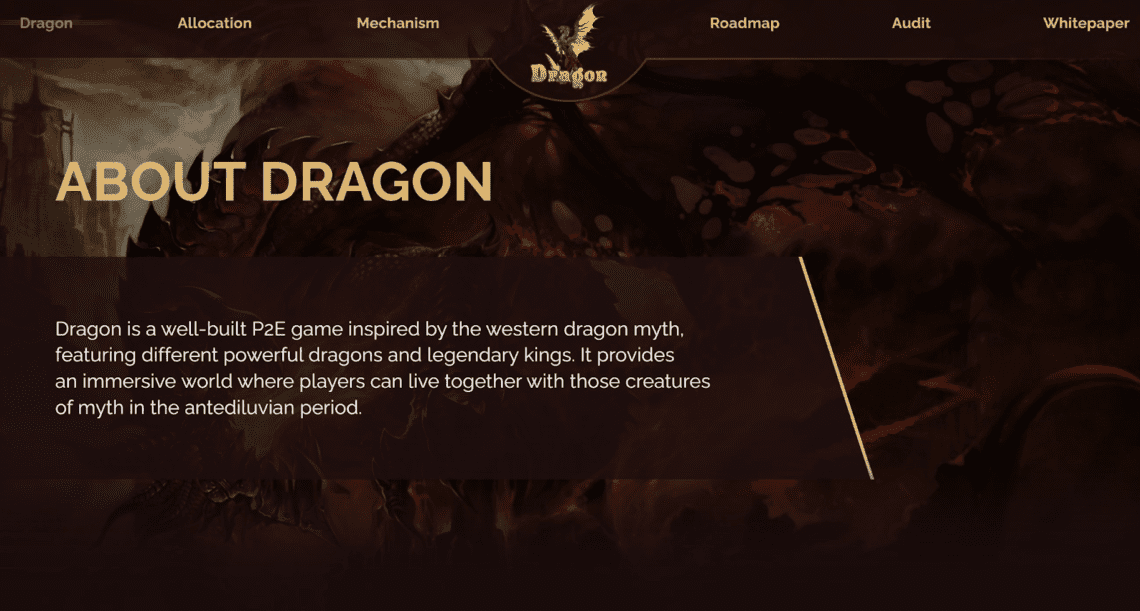 Dragon is a well-built P2E game inspired by the western dragon myth, featuring different powerful dragons and legendary kings. It provides an immersive world where players can live together with those creatures of myth in the antediluvian period.

They will create various dragon forms with different features, bringing the dragons with different abilities and functions. Dragon levels range from level 0 to 99. Dragons canbeupgraded by gaining experience in combat or by using upgrade gems.

Blindbox NFT: The items inside the Blind box include Dragon NFT, TerritoryNFT and Gem NFT.

The strongest dragons and the most famous tribes will eventually be displayed in the real world via holographic projection and broadcast around the world in exhibitions, movies, and documentaries.

You can buy territories and build tribes on your lands, adding design elements to your tribes. You can host alien dragons on the lands, and there will be more exciting gameplay about territory to arrive.

Territory NFT is divided into village NFT, city NFT and empire NFT. Players can buy territories and build tribes on their lands, adding design elements to their tribes. You can host aliendragons on the grounds, and there will be more exciting gameplay about territory to arrive.

Village NFT is the lowest level, and players can use tenvillagesand merge gems to create a city.

City NFT is intermediate in rank and can be mergedintoempires using ten cities and advanced merge gems.

The Empire NFT is the highest rank, and all gains withintheterritory belong to the territorial owner.

If the progress of territory construction reaches more than 30%, you can turn on the confrontation function and bet against other players.

The same as human beings of advanced intelligence and even beyond human intelligence, Dragons have often been depicted as winged, horned, four-legged, and capable of breathing fire; some can even use language and magic.

Dragon is a legendary creature in ancient Western times. The mythical Dragon has mighty power and magic ability, and there are many kinds of them. In the earliest legends that promote western tradition, it is a divine existence, and the image of the Dragon is the enemy of the god who created this world.

Players can call their dragons into battle, and the higher the Dragon’s level, the higher the battle revenue. At the same time, they can also trade NFT using $Dragon on the NFT marketplace, and each transaction will be charged a 2% transaction fee to burn tokens and create deflation.

$Dragon is a hyper-deflationary BEP20 standard token, whichmeans there is no tax, and the token price will increasesteadilyas time goes by. Also, $ Dragon can be used to participateincommunity governance and staking.

Governance: Players will be able to exercise their rights as token holders and participate in community governance.

Payment: $ Dragon will be the game currency, and players canmake payments using the $Dragon token.

Staking: Players can stake their tokens to earn weekly rewards.