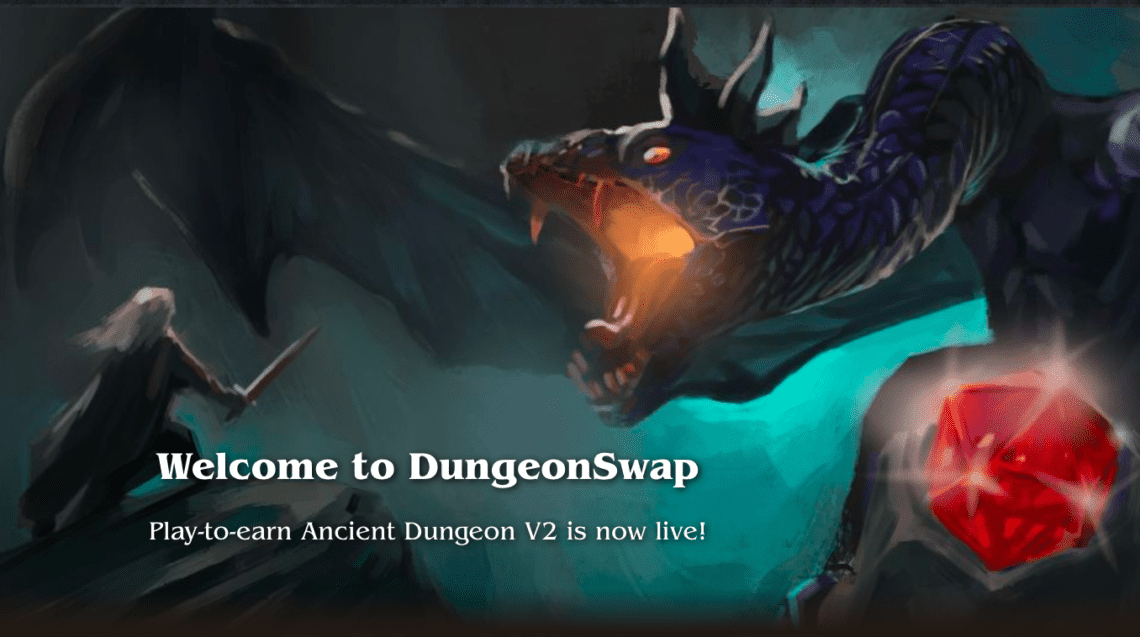 DungeonSwap, a rising decentralized RPG game, has set October 31st as the launch date for its upcoming Play-to-Earn version.

DungeonSwap offers users various ways to increase their income through their unique features:

DungeonSwap V2 P2E launch date is confirmed on 31st October. Together with the launching, there will be a series of events including airdrop, AMA, NFT listing, KOL promotions, etc. You can join the first airdrop contest with the pool prize of 5,000 $DND.

They are dedicated to helping to develop a decentralized economy that is sustainable, user-centric, and fun by designing a decentralized table-top RPG-style web game with yield farming and NFTs.

Because of the long-term total supply of 5 million DND and a game mechanism to burn them, the value of your DND Token will continue to rise. To ensure the increasing value of their $DND token, the balance of token minting and token burning is carefully maintained.

Risk-to-Earn and Play-to-Earn are two distinct features that can assist achieve both user satisfaction and financial rewards.

Because the DungeonSwap V2’s tokenomics have been carefully engineered to ensure a sustainable balance between token minting and token burning, combining both the new play-to-earn and play-to-burn models, the development team is concerned about long-term sustainability.

Because of the combination of the Defi yield-farming reward and the Gamefi aspect, the long-term supply is maintained to ensure sustainable tokenomics. The long-term goal is to maintain a balance between token minting and token burning in order to maintain the $DND token’s increasing value.

The steps below show how the Play-to-Earn reward is paid out:

From a tokenomics standpoint, this approach has the following benefits:

The DND token will have a long-term stable supply at a reasonable price, which means it will not be inflationary or deflationary in the long run, but will instead have a balanced minting and burning rate.

The key to achieving long-term balanced token minting and burning is to approach the problem from both sides at the same time:

The launch of the game on 31 October was a widely-recognized successful one. Gamers were able to earn a big special reward as an early-bird bonus of the V2 launch.

The development team also indicated that, from their tokenomics design, the long-term reward will stay at a satisfactory and sustainable level which will also contribute to long-term price stability.

Ancient Dungeon is a competitive leaderboard game in which players compete for the highest score over the course of a 12-hour session. You will receive extra $DND incentives if your score is higher. The DungeonSwap V2 is still in beta testing, but with useful feedback from beta testers, it will undoubtedly be enhanced in the near future. After each round, all players will receive a reward, with additional prizes for the top 10, round creator, and lucky draw.

Each round will have its own fantasy plot, ensuring that gamers are not bored and have the opportunity to thoroughly explore Ancient Dungeon’s fantastic universe. The game challenges players to be astute in their Battle Strategy selections in order to defeat their opponents. Attack, Special Attack, and Escape are the three main strategies. In addition, players can use NFT Equipment to increase their Total Battle Power, which will aid them in defeating their opponents.

Oxygen Meter and Round Info are two useful windows. The Oxygen Meter is the primary indicator of whether or not a player is engaged. Maintaining actions every 12 minutes will keep you from getting lost in the dungeon. Score and Rank may be found in Round Info, which gives you all the information you need to plan your strategy and prepare for battle with other players.

DungeonSwap is an RPG game in which you must determine how to defeat your opponents with the best equipment while also achieving a high score. In some circumstances, achieving a higher NFT may be more important than getting the highest score.

There are numerous factors that influence your final battle score:

The Dungeon (Risk to earn)

Unlike the Ancient Dungeon (Play-To-Earn), this version of the dungeon adds more danger and much bigger payouts. You could make a lot of money, but you could also lose everything if you don’t have any. The Dungeon should only be entered by people who are looking for a high-risk, high-reward game.

The Training Field and two Campaigns, The Mad Wizard’s Underground Lair and The Grand Colosseum make up the Risk-to-Earn Dungeon. Each segment will have an admission charge and rising rewards as the dungeon’s difficulty increases.

New adventurers are advised to start with The Training Field as a tutorial to familiarize themselves with the Dungeon. You will obtain NFTs ranging from 1 to 2 stars as well as a little amount of $DND after completing this dungeon.

The two Campaigns are where the game really starts to get interesting. After the last monster is defeated, those Dungeons have a larger treasury. The greater your reward, the further you progress in the dungeon. In each row, you must defeat a set number of monsters to complete the task. You can get NFTs ranging from 1 to 4 stars after completing The Mad Wizard’s Underground Lair. For the completion of The Grand Colosseum, those become 3 to 4 stars.

When fighting creatures, you have three battle strategies to choose from, just like in the Ancient Dungeon. NFT equipment is unquestionably necessary if you want to improve your chances of winning.

In the bottom right window, you’ll see the reward for each level, as well as the Grand Treasure, which is the payoff for the last level. If you choose to flee the dungeon, you will receive the prize. If you are defeated, you will not be able to receive the collected $DND reward, so planning your strategy is crucial if you want to get the huge prize or leave early. Players will possess the NFT drops in the dungeon even if they are defeated.