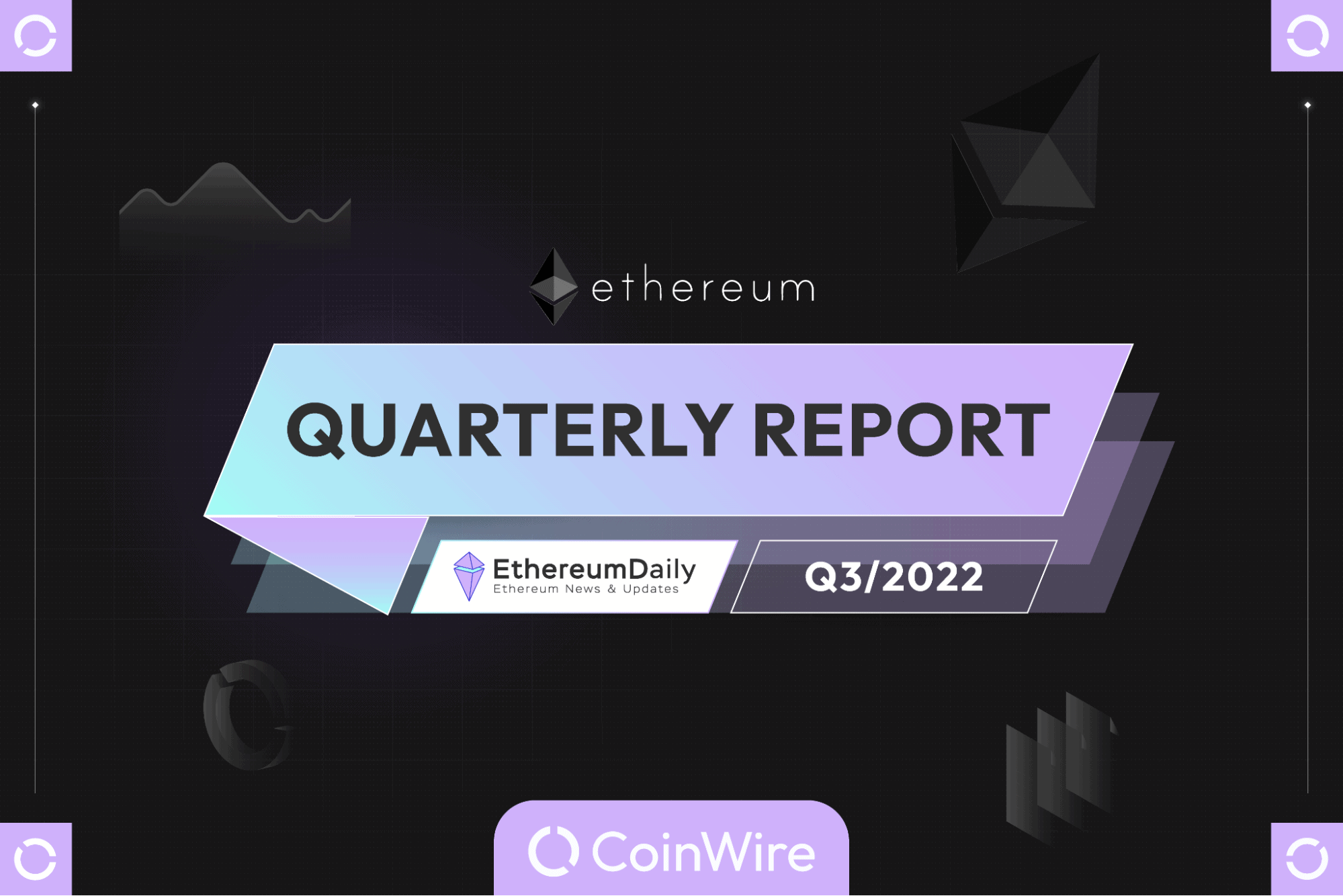 The value of Ether increased significantly from its Q2 lows, but the Ethereum network had difficulty returning to its pre-May levels of transaction volume, fee revenue, total value locked, and user activity. The situation was better in the background as Ethereum continues to dominate the smart contract network developer market.

With the successful switch to Proof-of-Stake, Ethereum entered a new phase. With a 99% decrease in energy consumption, a currency that may deflate, and a yield that investors can profit from, Ethereum may finally receive some of the institutional adoptions its supporters have long yearned for.

DeFi, NFTs, and other Ethereum dapps may become much more widely available and affordable thanks to Ethereum 2.0 and general purpose rollups, which may also offer a useful framework for micropayments.

During the third quarter, the price performance of Ethereum had increased significantly. Following by its Market Cap, both of them had gone up to around 20%

In fact, as the Merge – one of the important phases of the whole procedure moving Ethereum from Proof of Work to Proof of Stake, had been conducted successfully as well.

Generally, all of the four primary chart metrics including Daily Transaction, Average Gas Price, Daily Active Address and Daily Ethereum Burnt are stable compared with the downside of the current market.

To be more specific, though there are many leavers, there are still believers to the future of Ethereum. That is the reason why the balance of the volume shall maintain for the whole quarter three 2022.

In this way, this is the first time in history that Ethereum has attracted the attention of investors and traders.

In fact, this is a hidden signal indicating that there may be a small pullback trading. Though this maybe-bear market, the revenue generated from Ethereum is still impressive. In other words, Ethereum has proved itself an indispensable and strongest blockchain platform.

Since July 2022, Optimism has surpassed Arbitrum in the Total Value Lock (TVL)

The total value locked (TVL) of Optimism surpassed that of Arbitrum for the first time on August 6. The majority of the rise in TVL is attributable to the launch of OP incentives on Aave v3. In 90 days, the system will issue 5 million OP tokens to users of its Optimism money markets.

Since the August 4 launch of OP incentives, the TVL on Aave v3 has climbed by nearly 1,400%. In the two days that followed, almost 85,000 ETH worth of assets were transferred from Ethereum to Optimism. The value of OP actually led the dramatic surge in TVL, rising by 78% in the final week of July.

Indeed, Optimism had launched its Summer Incentive programs including these projects below:

Optimism is a Layer 2 Optimistic Rollup network designed to utilize the strong security guarantees of Ethereum while reducing its cost and latency. In other words, Optimism is a low-cost and lightning-fast Ethereum L2 blockchain.

Optimism had surprised various investors relating to its performance these days. More than that, its Total Value Locked (TVL) also increased significantly from $300 million to $1.15 billion.

In fact, Dai (issued by Maker Dao) on Optimism also rocketed from 30 million to 140 million in just 5 days. So what is the reason behind this growth?

Currently, Optimism NFT Quests launched as a way to get familiar with the most popular projects in the ecosystem while earning NFTs.

Regardless of the market’s performance, the Ethereum ecosystem is perpetually pleased with its expansion and improvement. An overview of Ethereum’s accomplishments and significant initiatives.

In 2022, Ethereum will implement the most significant protocol update in its history.

Notable upgrade and test milestones on the journey to The Merge.

The reason the transition from PoW to PoS is known as “the Merge” is because the running beacon chain will merge with the existing Ethereum mainnet chain.

The Merge itself is completed in two steps.

Projections – How will “The Merge” affect current and potential investors?

Most of us are looking forward to the tokenomics change of Ethereum. After The Merge, $ETH issuance is cut by 10x (from ~15K ETH/day to ~1.5K ETH/day), meaning validators will rely on tips rather than block rewards.

The current staking rewards APRs are around 4%, but many investors expect 7-15% after The Merge, with fluctuations based on the staked amount. A higher staked amount will equal a lower APR indeed.

The annual inflation rate for ETH will decrease from 4.3% to 0.43 %. The issuance of Ethereum will decrease by approximately 90% as more coins are staked. Consequently, ETH will become deflationary.

The Merge would not reduce gas fees. This is because gas fees are primarily affected by network demand relative to the network’s capacity. The Merge only changes the consensus mechanism from PoW to PoS; it does not change any other parameters directly related to network capacity or throughput. Hence, even after The Merge, Ethereum would not compete directly with other Layer 1s offering lower gas fees.

Transaction speed of Ethereum also would not be significantly faster after The Merge.

People are worried about Layer-2 solutions after The Merge. Since The Merge won’t lower Ethereum’s gas fees, Layer-2s can still play a key role due to their lower gas fees.

Ethereum Merge is without a doubt the most significant upgrade in the history of the cryptocurrency space. The Ethereum community is extremely optimistic about this Merge’s outcome.

A big advantage of The Merge is that Ethereum is expected to reduce the network’s energy consumption by an estimated 99.95%. This could further boost the popularity of Ethereum among people who are looking for an eco-friendly blockchain. As there is increasing concern about the environmental impact of cryptocurrency, the transition to PoS will definitely help Ethereum be viewed in a more positive light.

Ethereum Daily does not recommend that any cryptocurrency should be bought, sold, or held by you. Do conduct your own due diligent research and consult your financial advisor before making any investment decisions.