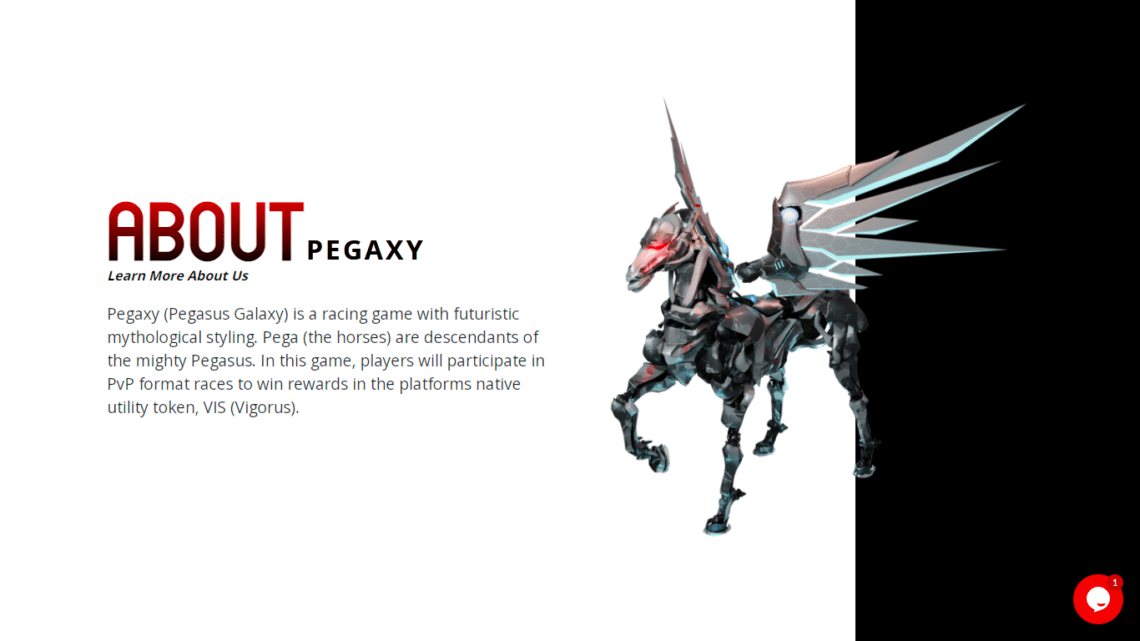 Pegaxy takes the Play-to-Earn concept to the next level by incorporating more unique elements that set it apart from the competition in the GameFi market.

Pegaxy is a play-to-earn PVP horse racing game in which users compete against 11 other racers for top three positions. Wind, water, fire, speed, and other elements are randomly assigned to each race. Players must place in the top three using clever improvements, food, and skill to win the platform’s utility token, VIS.

Players can breed, rent, sell, and, of course, race their Pega to earn VIS tokens in the game. This concept has proven to be a smart long-term economic approach for developing an NFT/Blockchain-based game since it allows teams to form large guilds, offer scholarship programs, and even allow lone players to make a second income by racing every day.

The first 5,000 Founding Pega will be sold in October 2021, one week before PGX will be released via IDO. The first 5,000 Pega are known as “Founding” Pega since these are the only ones that the Pegaxy Development team will create. Every Pega beyond #5,000 will be minted (produced) using the game’s breeding model.

Pegaxy wants to become the Metaverse’s home of horse racing, while also providing an ecosystem where users can play, socialize, and work in the same place, thanks to deliberate development and community feedback.

When it comes to renting, the team has worked hard to ensure that not only Pega owners (Managers), but also renters, are safe (Scholar). The Pegaxy rental system now has an automated payout and rental process. In a nutshell, Pegaxy creates an escrow account for each rental agreement that receives all rewards and distributes them according to the rental profit split that was agreed upon.

Within the Pegaxy game, there are three different forms of renting. Fixed Renting, Profit Share, and Direct Rental are the three options, each with its own set of rules between the Manager and Scholar to assure a win-win result in any situation.

Pegaxy implemented the Dual Token Economy with PGX as their Governance Token and VIS as Utility Token.

The Token and NFT Sales for $PGX will begin November 5th 2021 on the KrystalGO IDO Platform. Keep an eye out for further information on their website and social media platforms.

The official NFT Founding Pega sale will be held on October 29th for whitelisted participants.

For buying and selling, Pegaxy has its own local marketplace. Gamers are welcome to buy and sell NFT using the Buy Now/Auction method.

Every transaction on the Pegaxy marketplace incurs a 3% seller charge. No matter the currency you choose to sell your Pega, Food, Gear, or Stadium, the charge remains the same.

How the game works

Before we go any further, it’s important to know that all races are free to enter and there are no entry fees. To compete in a race, you must have at least one Pega.

Simply click the “Race” option once you’ve entered the Pegaxy game. After there, you’ll see an instant matchmaking area, click “Ready,” and you’ll be placed into a room based on your Pega’s “Class.” Once your lobby is full, a 60-second countdown will begin. During this period, you will be able to attach “Gear” to your Pega (if you have any), which allows you to change the attributes of your Pega.

How are the race results determined?

The race is mostly set by the Random Number Generator (RNG) at the start of the game, giving you a reasonable chance to place in the top three.

They’re trying hard to include as many player-controlled aspects as possible in Pegaxy, which will give higher-level players a better chance of placing in the top three because they’ve spent more time learning the game mechanics. A few months after the game’s release, an update will be issued.

Pegaxy will transition from an auto-racer to a more manual skill-based game in the future. During a race, they will be expected to manually control their Pega, which will allow competent players to perform better in the game. 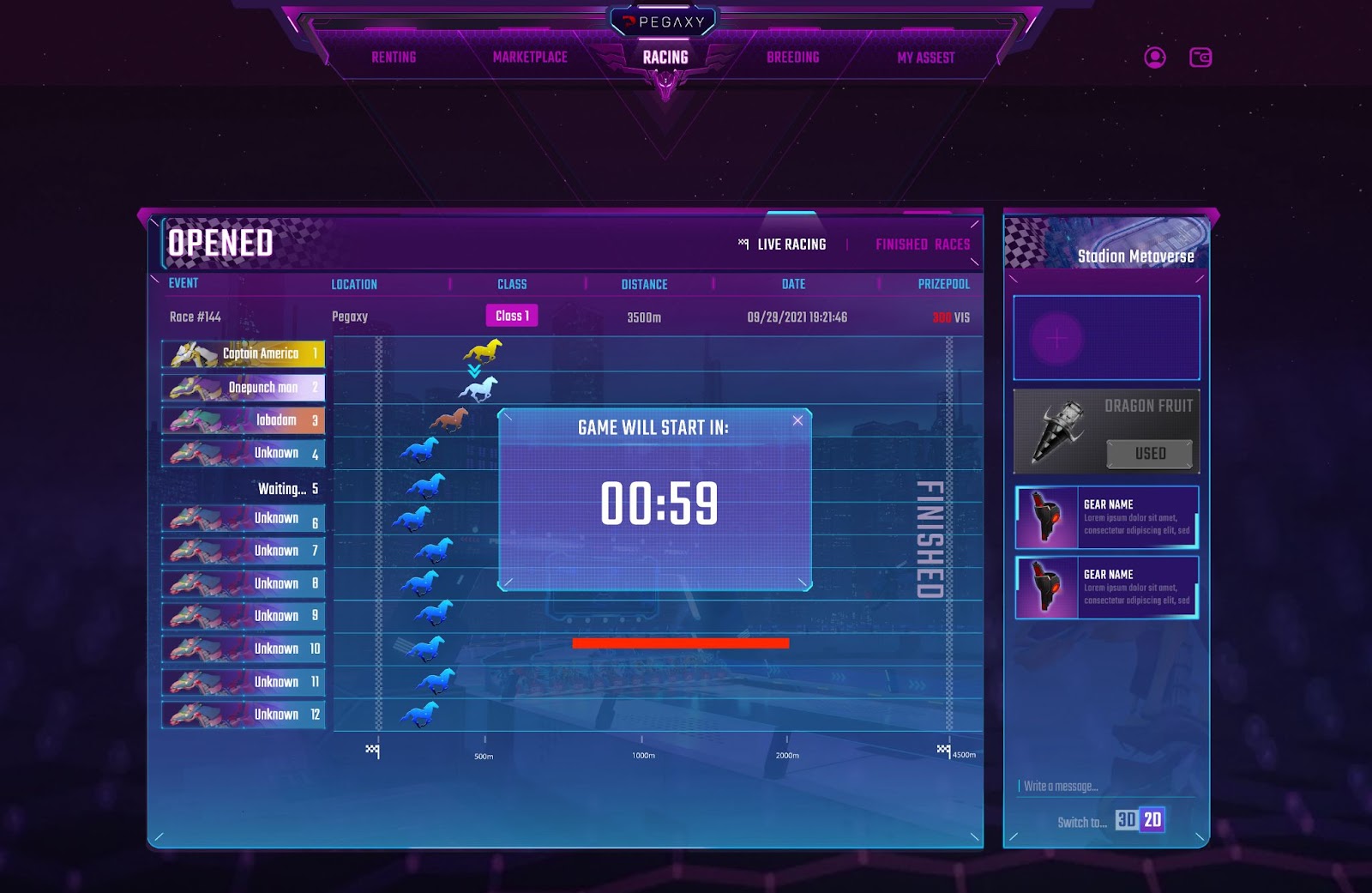 After the race, you can study not only the results, but also all of Pega’s information, including race history, bloodline, and other details.

Each month, the top 12 racers with the best statistics in each class compete in the Grand Dash Tournament! Each year, the Grand Dash Final is held in December after 11 months of qualifying.

Each month, 60 players from five different classes compete in the grand final, with a total of 132 racers competing in each class’s grand final (660 players all classes combined). The Pegaxy Metaverse’s Grand Final is the single largest day of racing. Spectators may witness the quarterfinals, semi-finals, and grand finals for each class live-streamed across all platforms, complete with live statistics and racing.

Pega’s early development models lacked wings, but over time, and in honor of the Metaverse moniker Pegaxy (Pegasus Galaxy), wings were added as a symbol of devotion to the great Pegasus, the Metaverse’s most adored god.

Pega’s design inspirations ranged from cyberpunk to mech, and eventually culminated in the Pega you see today. Pega has four bloodlines, each of which represents a distinct level of rarity: Zan, Klin, Campona, and Hoz, which is the rarest.

Pegaxy is a horse racing game, built on Polygon that is inspired by Axie Infinity. It has integrated many security improvements and an environment that allows players to participate in any race for no cost. Prepare to race, devote time, and become one with your Pega; the rewards will be well worth the effort.