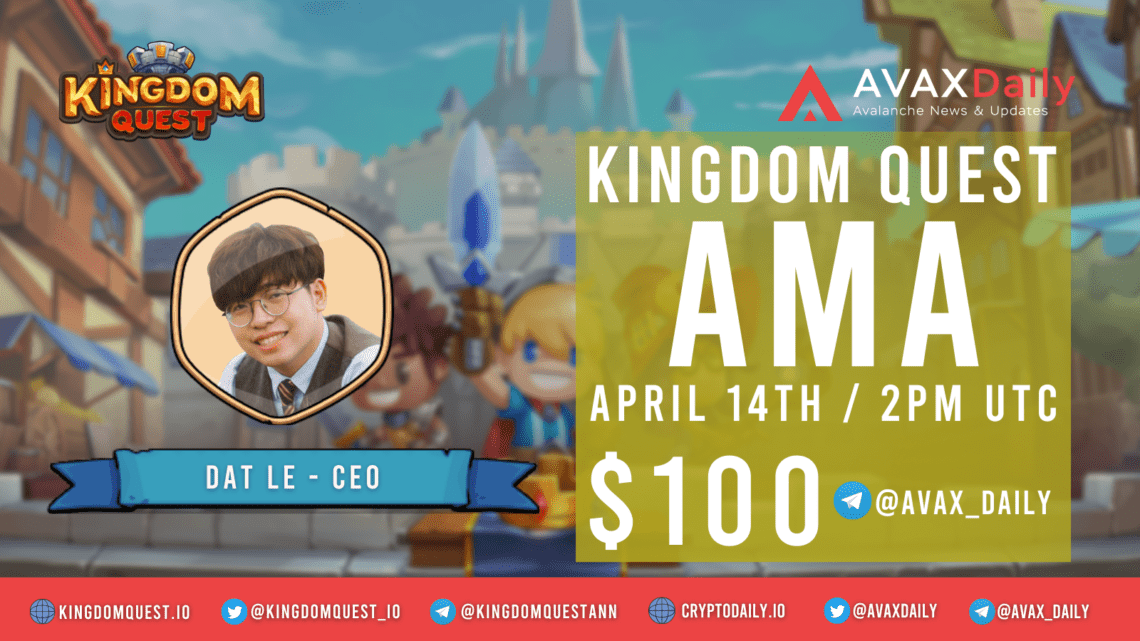 Cryptodaily Admin: Good day to you all 🙌 Welcome everyone to the Kingdom Quest AMA with AvaxDaily I’m your host Daley and today, I’m joined by Mr. Dat Le – CEO of Kingdom Quest!

Dat Le: Hi everyone, thank you for joining us in this session. Great to meet you all!

Dat Le: We are doing great, thanks for asking. We are having a busy day. Hope you guys are having a great day too!

Q1: Can you introduce yourself and the core team behind the game?

Dat Le: OH I would love to. Hello everyone again, I’m Dat Le, CEO of Kingdom Quest Project. Our founding team has vast experience in the traditional game industry: I myself have over 4 years of experience in the traditional game industry as a game designer. I’m responsible for designing game systems and enhancing gaming experience. My team and I have been involved in the development of hit projects in Onesoft – Top 2 game publisher in SEA, featured by Google Play as Falcon Squad, 1945 Air Force and Galaxiga

Cryptodaily Admin: Ah so you have been working together before, not just a brand new team I see

Dat Le: Yea, we have been friends and teammates for a long time

Q2: Can you briefly introduce the Kingdom Quest?

Dat Le: Alright! We are Kingdom Quest, a gaming metaverse launched in the emerging blockchain-based gaming space. Kingdom Metaverse is composed of the 4 exciting games in the casual genre – the currently dominant genre in the market

Cryptodaily Admin: Wow, 4 games in the same genre? Don’t you think the audience may look for something more exciting than casual though?

Dat Le: Oh do not worry, casual genres are what they call the genres which require less effort to learn but still very interesting to play, in traditional industry I mean. More than 80% of game downloads coming from casual genres, people sure love casual genres

Q3: What sets Kingdom Quest apart from other NFT games in the Market?

Dat Le: Okay! The remarkable aspect that makes Kingdom Quest stand out from all others is the “4 game – 1 token” ecosystem, which means the Kingdom Quest token (KGC) can circulate in all 4 titles. Kingdom citizens can also switch NFT items and characters among games to perform specialized tasks. This is unprecedented in previous NFT gamefi projects.

Cryptodaily Admin: Interesting. The ability to use your NFTs across different games and not be limited in one is one reason for NFT Games to exist, but yeah, I haven’t seen any games that can make this happen. To my knowledge of course

Alright, we will discuss about the release of your games in a bit

Q4: What are the major milestones your project has achieved so far?

Dat Le: Yea, very proud to share! From the very early stage, the ambition of the team and value of ideas impressed Mr. Thi, founder of Icetealab, GameFi and Red Kite, which are top launchpads on BSC. Icetealab incubated Kingdom Quest and Mr. Thi became our advisor. Also, even during the bear market time, our first airdrop event still attracted 20,000 users in the first 24 hours and more than 40,000 after 7 days on all channels, including Telegram, Discord and Twitter. Kingdom Quest joined Avalanche Hackathon. The project is really loved and supported by the Avalanche community and is currently in the top 5 of the contest.

Recently, we have become the 1st game-fi project having INO on Huobi NFT. Our INO will take place on Kalao and Gamefi.org as well. Please look forward to our INO date – 16th April!

Q5: What are your further plans for your project – Kingdom Quest?

Dat Le: Yeah, about that. Our ambition is to recreate a metaverse of games, which means we will convert all our titles to 3D and bring them to VR so you guys can experience our fantasy world in the fullest way. Also, we would not stop at one game. On the way and further in the future, we would like to cooperate with other teams to bring more games into the ecosystems, which will make this metaverse an endless adventure

Cryptodaily Admin: Wow, hold on now! I did not expect that at all, VR integration with all 4 games? Phew that’s something to look forward to

Q6: What are the benefits of owning KGC?

Dat Le: We only have KGC as our tokens. KGC will be like a universal key, which would bring you the ultimate power in our metaverse of games. KGC can be used to trade NFTs on our marketplace KGC can be used to create and enhance NFTs, which are 2 very crucial things to do to climb our leaderboard and earn. KGC can be used to buy in-game resources, which would allow you to progress faster in-game if you want some advantages against other people in the race to the top. KGC can also be staked. By staking KGC,  you can not only receive the token itself but also obtain rare, limited or exclusive NFTs of the current or the upcoming games. Of course, owning NFTs of the upcoming games will bring you early access to the games, and make you one of the first people to experience and earn from them

So with the benefits above, and with our plan of releasing not only news but real content and updates, buying and holding our tokens for the long term would be a wise choice you would want to make. For the offers, we will open public sales, the chance for all of you to get the token. The token will be listed on Trader Joe!

Q7: Can you explain the Earning mechanism on Kingdom Quest?

Dat Le: Sure, Kingdom Quest provides players with a diverse and transparent earning mechanism. By participating in the game, players can earn money in two main ways. The first way is Token Rewards: Players who conquer challenges and get a high rank on our leaderboard will be rewarded periodically with $KGC with the amount corresponding to the player’s rank. In addition, we also offer a high value $KGC bonus, distributed randomly to players on the leaderboard as a way of incentivizing Kingdom Quest loyal companions.

The second way is NFTs Collecting: Players participating in PvE game mechanics have a probability of receiving Mystery Chest Shards. The Mystery Chests can be crafted by collecting enough shards. Players can choose to open these chests to receive characters or list chests on the marketplace for trading. Kingdom Quest players can also earn money through our special events like Tournament, Arena Battle, or Staking KGC to receive interest

I hope my explanation answers your questions!

Cryptodaily Admin: Yeah it did 😂

Q8: Can you provide more information about the upcoming INO

Dat Le: Our INO will take place on Huobi NFT, Kalao and Gamefi.org very soon. Along with this triple INO event, we also have ongoing Airdrop campaigns, NFT giveaways and IDO whitelist slots for users. Join now and grab your chance to win valuable rewards!

Dat Le: That’s so kind of you. Thank you!

Q9: How does the team plan to attract & keep long-term players?

Dat Le: Yeah. We all know that in order to attract and retain players in a gamefi, we have to optimize both aspects: Game Play and Finance. So the Kingdom Quest team has come up with a specific strategy for each aspect. For the in-game economy, we maintain the rewards mechanism according to the leaderboard in parallel with a small random amount of rewards to both effectively control inflation and motivate everyone. Besides, the development of an entire ecosystem, in the immediate future, is the launch of 4 games to help economic factors in Kingdomverse continuously expand, helping to increase utilities and the value of game assets that players own. In terms of game mechanics, we focus on two factors: Make it personal and Recognize Loyalty

As mentioned above, the multi-game ecosystem makes it possible for us to develop different game genres to suit a variety of users. In other words, anyone can find a favorite title in the Kingdom Verse and stick with it. We also monitor and record every interaction of players in the game to identify a loyal user base and provide them with special incentives, such as earlier access to new games, priority on preferential sales, and exclusive sale. As Kingdom Quest team members started from being game lovers, we aim to build the most ideal game space for Kingdom Quest enthusiasts

Cryptodaily Admin: With this we are now at the end of our AMA session with Kingdom Quest🔥🔥🔥

Dat Le: First of all, it has been an hour for this session. Thank you all for your time with us today! We would love to answer other questions in our socials, please do not hesitate to share your concern with us. We are going to have our Open Beta Test for the game really soon. Kindly feel free to join and try out. Also this 16 April we will have an INO event on Gameofi.org, Huobi NFT and Kalao. Please check it out.

I think that should be it. THank you all and have a great day. Take care!

Cryptodaily Admin: Thank you Dat Le for this AMA with Kingdom Quest! Best of luck with the INO 🥳 Take care man!