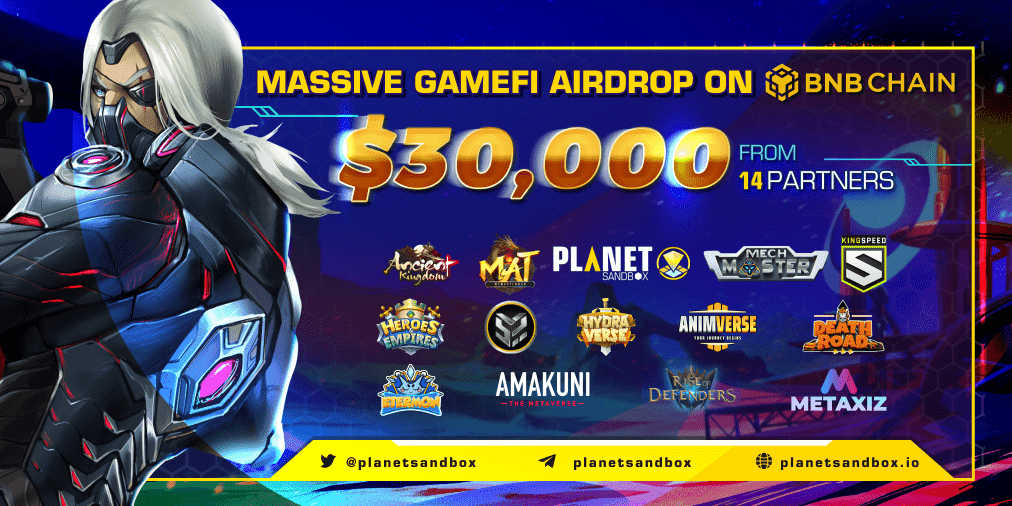 It was recently announced that 15 leading GameFi projects on Binance Smart Chain (BSC) will host a coordinated airdrop with over $30,000 for participants. The participants include PlanetSandbox, Deathroad, MechMaster, AMAKUNI, MetaStrike, Rise of Defenders, Kingspeed, Ancient Kingdom, My Master War, Metaxiz, Heroes & Empires, Etermon, Hydraverse and Animverse.

In total, $30,000 worth of crypto-assets are up for grabs. Rewards are made up of governance/utility tokens, non-fungible tokens (NFTs) and so-called hero boxes, and a total of 100 winners will be selected to share the prize pot. On average, total prizes from each project are roughly $2,000, with many split between multiple tiers.

To be in with a chance of winning, all users have to do is follow each of the projects on Twitter, log their entry here, and enter their BEP20 wallet address. Entries must be logged by 11.59pm on April 27.

Binance Smart Chain is carving out a reputation as the go-to GameFi network. Last December, the network teamed up with gaming giant Animoca Brands to launch a $200 million investment program to incubate GameFi projects building on BSC. The network now supports over 500 gaming dApps according to DappRadar.

As a result, BSC has become a magnet for leading GameFi projects, particularly in Southeast Asia. Southeast Asia, with strongholds like Vietnam and Indonesia, was the driving force behind the rise of Axie Infinity and the recent play-to-earn narrative which fueled the rise of GameFi in 2021. Beyond engaged users, Southeast Asia brings passionate gamers that are mobile-native and understand the mix of game mechanics and blockchain-savvy that is required to perform at a competitive level.

The First Airdrop of its Kind

Airdrops are a common mechanism to attract new community members and rewards existing ones for their loyalty. In this case, 14 leading communities will combine forces, creating what is expected to be a massive wave of cross-adoption between platforms. Users will be exposed to new games, while having a chance to win prizes that will immediately give them a leg up on the competition.

The following prizes have been confirmed for airdrop winners:

By participating in Binance Smart Chain’s latest headline-grabbing campaign, companies like Planet Sandbox, DeathRoad, Etermon and others will be looking to attract yet more interest in the network’s fast-growing GameFi ecosystem. The partnership can be looked at as a coalition of sorts, where games can use each respective competitive advantage to build a combined network effect to help the ecosystem flourish as a whole.

The best part is that the airdrop is easy and straightforward. A reminder for interested gamers: all you need to do is follow each project on Twitter, document the record of this action here, and submit your BEP20 wallet address. Make sure to do so by April 27th as well.