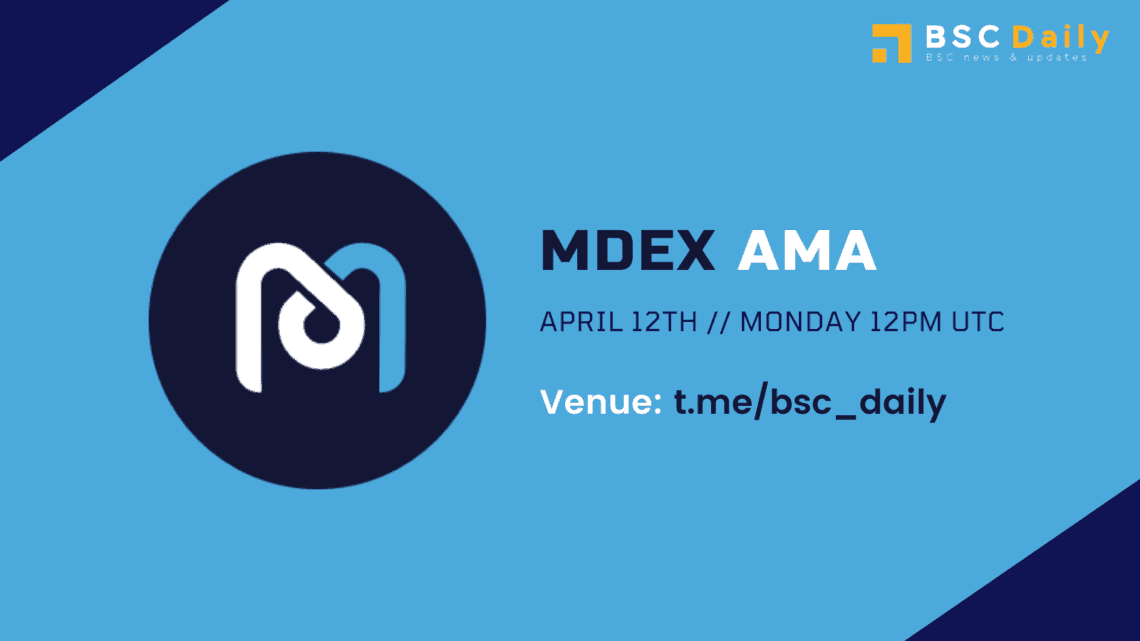 BSCdaily – Admin: Can I check if you’re in the house @MdexKiko?

Kiko: Hello everyone! I am glad be here for sharing

BSCdaily – Admin: Thank you for attending today’s AMA @MdexKiko, nice to have you here

Q1: What is Mdex all about? Give us a little summary

Kiko: MDEX.COM supports the decentralized cross-chain transaction protocol of BSC, HECO, and ETH, and occupies first in the DEX rankings of CoinMarketCap and CoinGecko.It aims to integrate the distinct advantages of a variety of basic public chains to create a high-performance compound DEX ecosystem. Using the “dual mining incentives through liquidity mining and trading mining”, it maximizes the returns for participants.

The transaction fee charged is utilized to repurchase and burn the platform token, which contributes to materializing a self-driving closed loop for value capture.MDEX is now available on Huobi Eco-Chain (Heco) and Binance Smart Chain (BSC). Users can use MDEX Bridge to realize cross-chain interoperability between  Heco, ETH and BSC.

MDEX is committed to building a DeFi platform that integrates DEX, IMO, and  DAO. In doing so, it seeks to provide one-stop liquidity services for more high-quality assets, and at the same time offers users a more secure, reliable, diverse, and cost-effective transaction experience. Choose MDEX.COM for the best trading experience, most economical trading cost and fastest trading speed.

Q2: Could you tell us a little bit about yourself and your team? What are your past experiences?

Kiko: I am Kiko, the CMO of Mdex. I have been in the crypto market for 3 years. I have extensive experience in the Crypto industry particularly in DeFi. MDEX is an exciting and innovative project on the market that has made significant strides over a short period of time compared to its peers. After getting into the crypto industry, I never looked back and my goal is to explore as much about this field as I can.

Q3: So what motivated you and your team to start Mdex?

MDEX is backed by the Huobi ecological chain Heco. Taking advantage of Heco’s public chain performance, MDEX’s Swap operation time takes about 3 seconds, so users have almost no sense of delay. The trading experience can almost catch up with centralized exchanges.

MDEX is backed by the Huobi ecological chain Heco. Taking advantage of Heco’s public chain performance, MDEX’s Swap operation time takes about 3 seconds, so users have almost no sense of delay. The trading experience can almost catch up with centralized exchanges.

The dual mining mechanism of MDEX combines the advantages of the low transaction fees of the Heco chain and the prosperity of the Ethereum ecosystem.

Q4: Let’s dive into your token $MDX. Can you share with us your tokenomics?

Kiko: Nice, I will share the tokenomics for all of you.

Kiko: The total supply of Mdex’s platform token MDX is about 1 billion, of which 10% is used as a team reward for team operation, technology research and development, etc., and it will be unlocked in 24 months after being launched by smart contracts. 7% is used as an early investor share to provide more sufficient and beneficial funds and resources for the development of Mdex; 3% is used for market promotion and brand building; these two shares are unlocked in twelve months after going online. The remaining 49% and 31% are used for liquidity mining and trading mining on HECO and BSC respectively.

BSCdaily – Admin: Nice tokenomics, nearly half of the token supply is allocated to liquidity and trading mining

Q5: Could you give us some info on Mdex’s token? What are some of $MDX use cases?

Kiko: As the core medium of exchange token of MDEX, MDX not only represents the rights of the holders, but also has its practical application value. MDX  can be used in the following scenarios.

MDX  is a community-led decentralized project that can be used for community governance of MDEX to make decisions on major issues in the community.  Such as voting on transaction fee ratios, review of other important rules, and the decision to achieve deflation in the face of periodic repurchase and destruction of tokens. The list is as follows:

The comprehensive evaluation is made according to the transaction volume and total value locked of the project, and the MDX users vote for the decision.

MDX  is also a standard fundraising token used by HT-IMO, a  de-centralization fundraising protocol based on MDEX platform. It’s similar to use ETH to do ICOs on Ethereum platform and will have greater value as IMO is widely used.

For now its use is limited to trading, staking and to provide liquidity to the ecosystem.

BSCdaily – Admin: That’s a lot of use cases for MDX

Kiko: 1st, you can buy $MDX by swap on mdex.com

Kiko: 2nd, you can mining on mdex.com by liquidity mining

Kiko: 3rd, the unique mining mechanism, trading mining, when you trade on MDEX, it means you can get MDX reward by each successful transaction, trading is mining.

Kiko: 4th, for the MDEX boardroom, you can get MDX reward by staking.

Kiko: 5th, join the M-angle recruitment program, to be volunteer of mdex.

Kiko: Mdex was launched in Jan, 2021 and two months after the launch, the daily transaction volume of MDEX has grown and have exceeded $5 billion which is way above some of our peers.

Kiko: MDX token has achieved over $1 billion in market capitalization. As the community grows, more users trading MDX continues to increase and on average an aggregate of about $350 million worth of MDX changes hands every day.

Kiko: We focus on expanding Mdex and our future development can not be separated from the significant support granted by Heco. Part of our ongoing plan includes growing our communities and influential power to the rest of the world. With commitment and determination, we strive to reach a larger global community as we work towards making MDEX a big success. Our team is also always keen to adopt and adjust to any new developments in the crypto space.

Kiko: Taking the future to measure the present, we are fortunate to participate you in a great practice of reconstructing trading scenarios. As the first  DEX to support using transaction fees for token repurchase and burn,  MDEX has always insisted on achieving the ultimate in product. We believe the market and users will naturally give fair judgement.

Kiko: On February 20, the daily transaction volume of MDEX which was launched for 38 days has exceeded $5 billion far exceeding the cumulative amount of the rest of the DEX, and became the top 1 in the CoinMarketCap and  CoinGecko DEX rankings. So far, it took only 50 days for the cumulative transaction volume to exceed $100 billion for MDEX, while 840 days for  UniSwap. The transaction fee subsidy for users with more than $310  million makes it the lowest transaction fee trading platform. Cumulative  LP rewards are $210 million and the LP yield rate is the highest in the entire network.

Taking trading as the starting point, our broader vision is to create a  composite DeFi ecosystem that integrates DEX, IMO, and DAO.

Kiko: In order to provide services to more ecological users and provide the best quality trading experience, MDEX will continue to upgrade and iterate to unlock new development routes. In Q2, MDEX will gradually realize the following  four functions:

As we can see, we have realised this goal from Heco to BSC

Q8: Where can we find out more about Mdex?

Kiko: welcome to mine on MDEX.com

BSCdaily – Admin: Thanks for sharing

BSCdaily – Admin: As we are coming to the end of the AMA. @MdexKiko @justnow09, anything else you guys would like to add before the end?

Kiko: Thanks for all of the BSC daily community.

Kiko: welcome to mine on mdex.com now

BSCdaily – Admin: Thank you for your time Kiko

BSCdaily – Admin: Hope you have enjoyed yourself as much as all of us did

BSCdaily – Admin: I wish Mdex all the best and look forward to its development in the near future