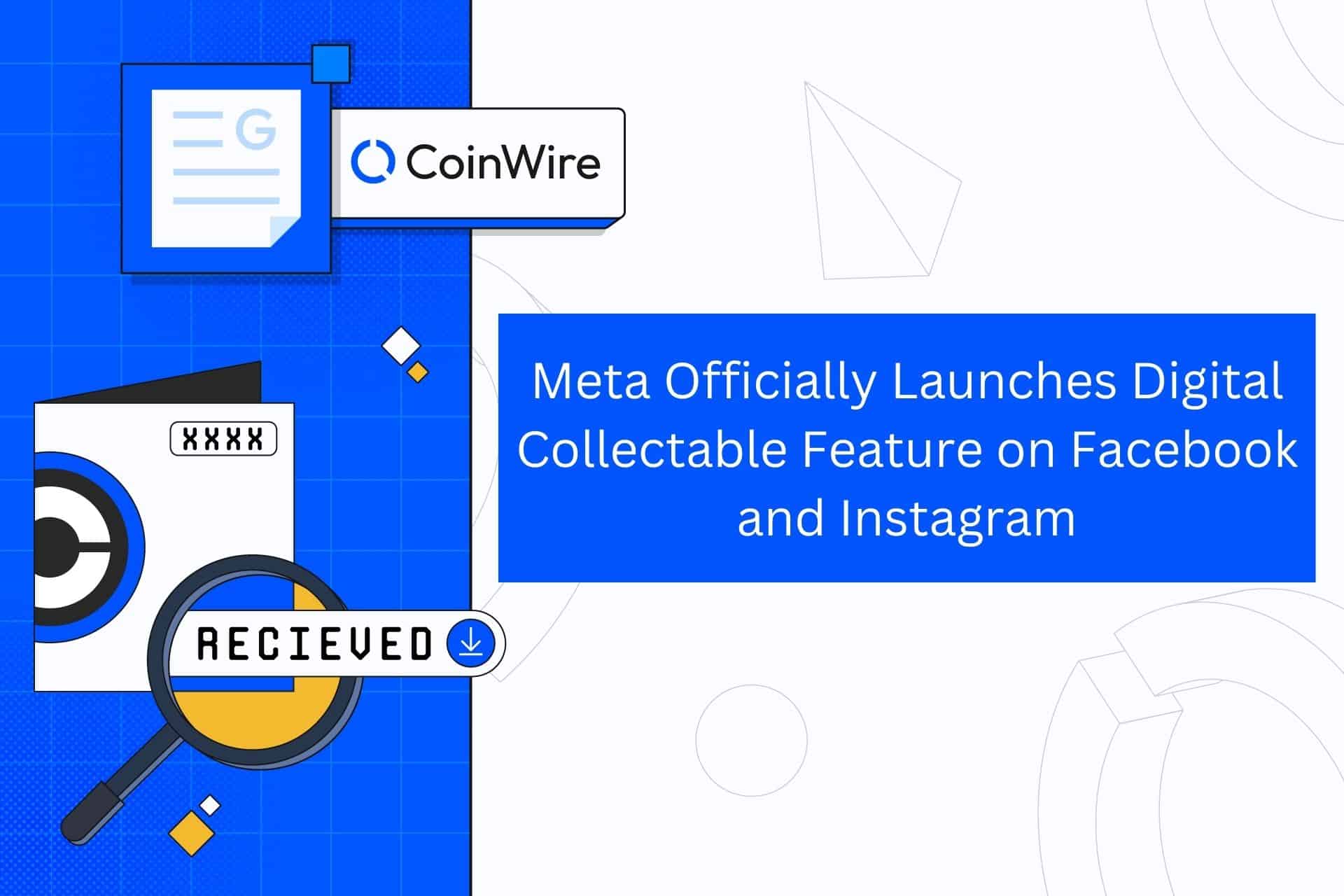 Instagram and Facebook now offer the highly anticipated Meta’s digital collectable feature, which was once only accessible to a small number of users. With the help of the aforementioned feature, users may link their cryptocurrency wallets to their social media profiles and show off their NFTs to their friends and followers.

Meta, the parent company of Facebook and Instagram, has officially announced the launch of their respective social media platforms’ digital collectible feature. For the time being, the feature will only be available to users in the United States.

Users can share their digital collectibles on Facebook and cross-post them to their corresponding Instagram account or vice versa, according to Meta’s release. Users can also link their cryptocurrency wallets, which are now only available through Coinbase, Dapper Labs, MetaMask, Rainbow, and Trust, to Instagram.

The feature will be available in the United States while Meta also announced its international expansion which will include countries in Africa, Asia-Pacific, the Middle East and the Americas.

Meta began rolling out the digital collectible feature on Instagram for their US users in May 2022. This feature enables users to connect their digital wallets to the social media platform Instagram. Furthermore, users are free to display their own NFTs, whether they created or purchased them.

Meta stated at the time that the feature aims to bring NFTs to a wider audience while also providing an avenue for more monetization opportunities. The digital collectible feature was also said to be part of their efforts to improve the user experience.

The feature began to roll out on Facebook in June, where Meta revealed that the social media giant had started with the infamous Ethereum and Polygon NFTs, but that Solana and Flow will soon follow. The user’s Facebook page will have a “digital collectibles” tab where they can post their NFTs, which are distinctive blockchain tokens that serve as ownership proof.

The CEO and founder of Meta, Mark Zuckerberg, announced on Facebook in August that the digital collectable feature would be expanding. The company’s integration with Coinbase (COIN) Wallet and Dapper preceded the aforementioned expansion, which included one hundred new nations.

And in September, the digital collectable function was formally introduced. It currently offers features like labeling the appropriate author and collector as well as cross-posting between Instagram and Facebook or vice versa without additional expenses.

Many Crypto Twitter users weren’t overly excited by the news, despite receiving a lot of favorable reaction at their announcement of their beta testing. Many dubious users voiced their opinions about Meta’s new endeavor without holding back. The issues of data security and privacy that will become public once digital wallets are connected to these social media sites were their main source of worry.

This controversy is said to have its roots in the April 2021 incident in which highly private data belonging to more than 500 million Facebook users was exposed on a popular hacker site. Phone number, Facebook ID, full name, address, former addresses, birthdate, email address, relationship status, and bio were among the details that were exposed.

Sharing digital memorabilia to connect to “Meta,” according to a twitter user, is not a smart move. One user expressed concern over what Meta might do with the user’s data that the business can access from digital wallets, while another voiced similar worries. The aforementioned user questioned whether the corporation would monitor the user’s cryptocurrency usage. Users may become targets for fraud and theft as a user noticed the new feature that publicly displays important digital assets associated with one’s identity.

The entertainment company, bank cards, basketball team, and even retail stores have all gotten into the NFT mania. It is now expected that many social media platforms have been developing new features to stay up with this trend. One of which is Twitter.

Twitter launched a feature that allowed verified NFT users to post their NFTs as their profile pictures on their individual Twitter accounts to kick off the year 2022 with NFTs. The function became accessible to Twitter’s Blue service’s paying customers.

Instead of the customary circle border used for profile images, the NFTs have hexagonal borders to draw attention to them. The drawback is that anyone may quickly replicate the photos, and there is no way to verify ownership other than by checking the Ethereum blockchain.