Ripple Labs Inks Deals With Lemonway and Xbaht; Ripple CEO Believes Battle Against SEC is About to End 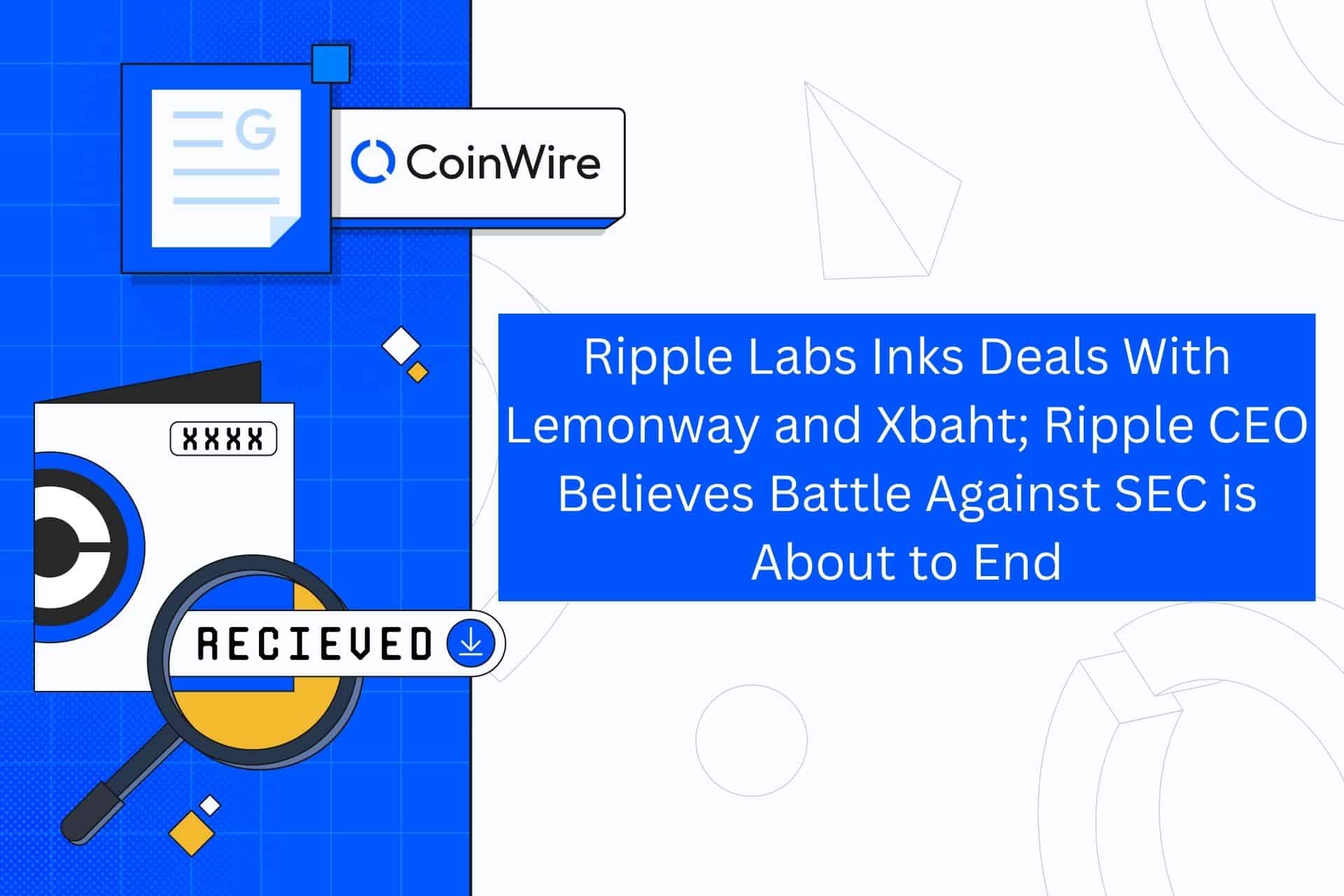 Ripple Labs is expanding into the European market with agreements with Lemonway and Xbaht. Aside from these new collaborations, Ripple’s CEO, Garlinghouse, predicts that their company’s case against the SEC will be resolved in a matter of months.

Despite the fact that the cryptocurrency market is still in turmoil, Ripple Labs, a cryptocurrency payment company, has continued its journey to the European market by signing new partnerships in France and Sweden.

According to the report, Ripple has inked a deal for its “On-Demand Liquidity” system with Lemonway, a Paris-based regulated payments provider for online marketplaces, and Xbaht, a Swedish money transfer provider focused on remittance payments between Sweden and Thailand.

In a press release, RippleNet, a collection of banks and payment providers that have signed on to use Ripple Labs’ blockchain network for international payments, claimed to have clocked up payment volume of more than $15 billion per year.

This is reportedly due to the high demand for Ripple’s products in Europe, where data shows that 50% of European consumers and 70% of European financial institutions are interested in cryptocurrency-enabled payments. Furthermore, France has recently expressed an interest in embracing the potential of crypto technology.

This collaboration between Ripple and Lemonway is said to drive operational efficiencies by eliminating the need for pre-funding accounts abroad. Lemonway will be able to use the trapped pre-funded capital to help their business grow and scale as a result of this.

Aside from Ripple, another On-Demand Liquidity solution has emerged: Xbaht, which will be Ripple’s alleged first venture in Sweden. This collaboration between Ripple and Xbaht will reportedly allow the company to facilitate instant and cost-effective retail remittances via On-Demand Liquidity solution, which will then be supported by Tranglo, a Singapore-based cross-border payment hub.

In short, as stated in a Ripple press release on October 11, these collaborations will allow Ripple’s On-Demand Liquidity solution to help address cross-border payment issues such as speed, reliability, and high transfer costs. Furthermore, both Lemonway and Xbaht will no longer require account pre-funding for international transactions.

Visions for the Partnership

According to Sendi Young, Managing Director of Ripple Europe, their company has always envisioned using blockchain and cryptocurrency in real-world applications since its inception ten years ago. He went on to say that their collaboration with Lemonway and Xbaht will tap into global crypto liquidity to eliminate the traditional problems associated with cross-border payments, such as slowness, unreliability, and high costs.

This statement was supported by Lemonway’s Chief Operating Officer, Jeremy Ricordeau, who stated that Ripple’s solution will provide their company with greater flexibility when dealing with payments to their respective partners. This is said to free them from the traditional banking cut-off cycle, drive operational efficiencies, and eventually allow them to save some money to improve their customer offering. Furthermore, he stated that they are looking to add more benefits to their business that they can pass on to their clients now that Ripple’s On-Demand Liquidity solution underpins their treasury.

Michael Andersen, the Chief Executive Officer of Xbaht, shares the same sentiments as Ripple’s Managing Director, claiming that international payments should be quick and seamless. He also stated that their collaboration with Ripple will streamline their company’s process for customers sending remittances between the two countries. He claims that this collaboration will make the process faster and more reliable, while also lowering costs.

The CEO of Ripple, Brad Garlinghouse, believes that the battle between Ripple and the US Securities and Exchange Commission is nearing an end, but that it will take several months. Although Garlinghouse remains optimistic and predicts that the case will be resolved by the first half of 2023, he has some reservations.

XRP, Ripple’s native token, has been on a tear for several months, allegedly due to increased speculation about a successful resolution to the case before the end of the year. Ripple was accused of conducting an unregulated securities sale with its XRP token in December 2020, when the case was first filed.

According to Garlinghouse, this case is a forerunner for both the U.S. and the cryptocurrency industry.  He also stated that the Federal judges are working at their own pace, but optimistically, he predicts that this will be over in three to four months, but pessimistically, he stated that it may last longer.

He alluded to former SEC Division Director William Hinman’s 2018 speech, in which he claimed Ether is not secure and ordered the SEC to hand over the details six times. Finally, on September 29, Ripple scored a minor victory when the aforementioned transcripts were finally turned over. Garlinghouse stated that they are considering reaching an agreement with the SEC on the condition that XRP not be classified as a security.