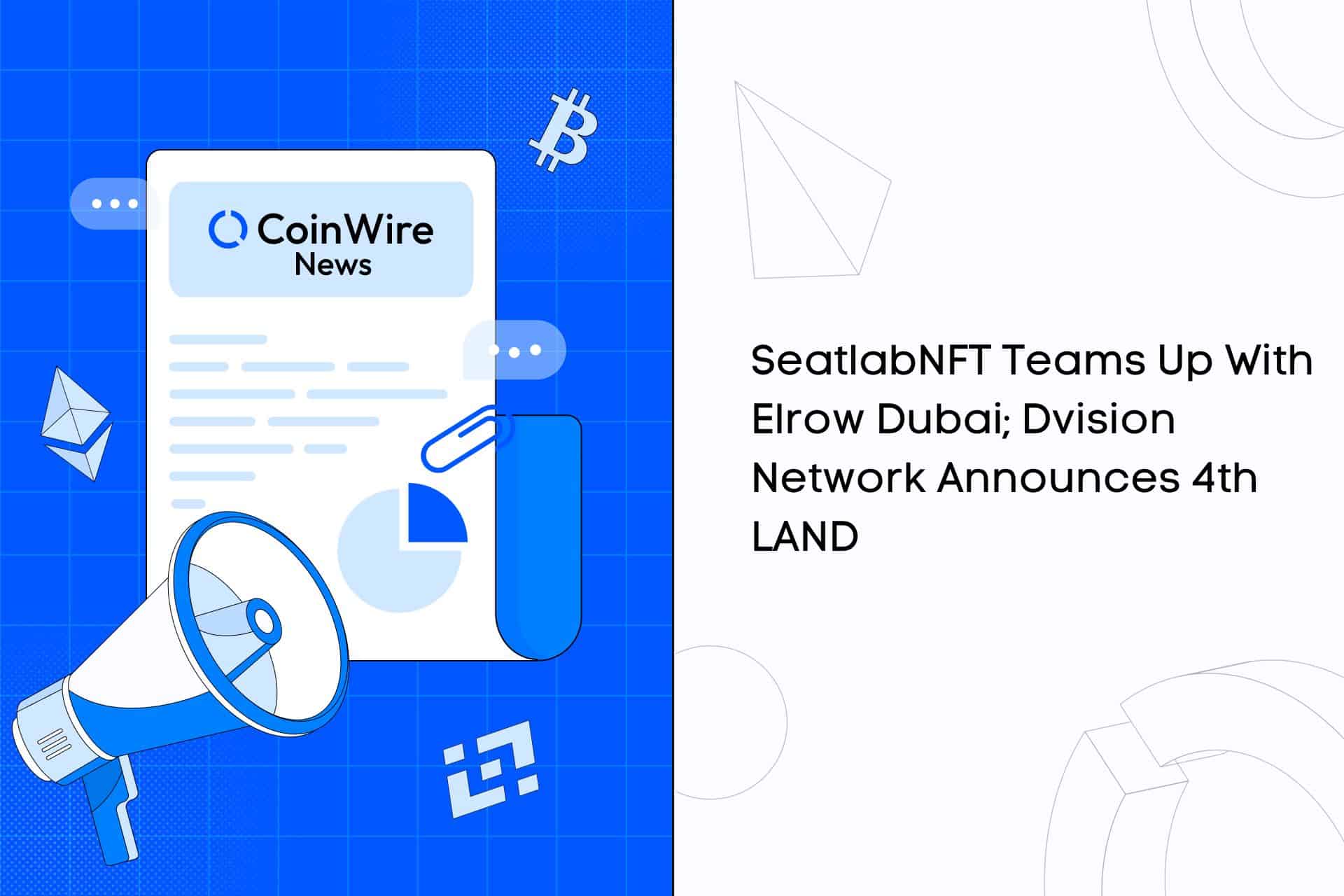 Elrow Duba and SeatlabNFT are working together to help musicians strengthen their bonds with their individual fans, as well as to reduce the likelihood of fraud and the effects of scalping.

All VIP tickets for the upcoming Elrow Dubai event in February 2023 will be distributed as NFTs, which will also include gamified interactive blockchain installations, digital collectibles, and airdropped rewards. As a result, NFTs will be issued for all VIP tickets.

The renowned metaverse veteran Dvision Network has announced its eagerly anticipated 4th LAND Sale in collaboration with Binance NFT and GameFi.org, despite the current market conditions. The 4th LAND Sale was held simultaneously on October 28, 2018, on GameFi.org, the Dvision Network, and Binance NFT, making it easier for Dvision LAND collectors to interact with different chains and platforms.

Elrow Dubai, a significant electronic music brand, and the NFT event ticketing marketplace SeatlabNFT are collaborating with the aim of assisting music artists in forging stronger bonds with their respective fans, as well as eliminating the risks of fraud and lessening the impact of scalping.

The carnival and circus themes of Elrow Dubai’s events are well-known for attracting large crowds and placing a strong emphasis on immersion. According to the Seatlab NFT, which aims to take live events to the next level, shares the same vision and philosophy as the major electronic music brand.

Another intriguing development is that Elrow Dubai reportedly plans to provide VIPs with Proof of Attendance NFTs via the SeatlabNFT platform. This is like the 21st-century equivalent of memorabilia, which makes their event participation forever immortalized on the blockchain, and it would reportedly be a powerful way in commemorating a special event, as well as allowing their owners to proudly proclaim “I was there.”

According to reports, starting on November 2, 2022, only SeatlabNFT will be able to sell VIP tickets for the 8,000-capacity Elrow XXL festival event scheduled for February 2023 in Dubai. It is anticipated that the event will offer VIPs an immersive, NFT-enabled experience that has never been seen at a large-scale event.

NFTs have successfully entered the art market, and they are now working to enter the music industry. However, for NFTs to enter the music market, mass adoption is required. This can be accomplished by making sure that everyone’s interaction with the technology is natural, whether they are tech savvy or not.

This is the goal of the collaboration between Elrow Dubai and Seatlab NFT. With the partnership in place, Seatlab NFT will act as the central location for ticket storage for the event. The same app will have an integrated camera that will let festival attendees interact with the on-site attractions and earn exclusive rewards. The wallet creation will also be handled by the app, which will greatly aid in removing the difficulties associated with Web3 and streamlining the entire process of user onboarding.

According to SeatlabNFT CEO Ryan Kenny, this partnership is a significant milestone for them in showcasing the potential of their technology, which goes beyond using NFTs for large-scale event ticketing to also rewarding fans with rewards that have real value and strengthen their connection to the events they attend.

As was already mentioned, the upcoming Elrow Dubai event is scheduled for February 2023 and is anticipated to be the first time that thousands of fans will learn about NFTs. The dedicated SeatlabNFT app, which will make use of ticket sales, has already been released on Google Play and the Apple App Store.

In addition to this collaboration, Seatlab NFT has undertaken other projects. One example is its partnership with the Lost Village festival, which aimed to produce a limited-edition NFT membership card that reportedly allowed the holders access to an immersive audiovisual festival experience. Additionally, Seatlab NFT organized a freshmen party tour of seven U.K. cities. universities and DJs like Hardy Caprio, R3WIRE, LF System, and Clean Bandit.

Contrary to recent reports that the NFTs trade volume is declining, the metaverse trade volume is surging as more businesses get on board with the trend. Despite the current market conditions, the renowned metaverse veteran Dvision Network has announced its eagerly awaited 4th LAND Sale in partnership with Binance NFT and GameFi.org.

On October 28, 2018, the 4th LAND Sale simultaneously took place on Binance NFT, GameFi.org, and the Dvision Network’s native marketplace, making it simpler for Dvision LAND collectors to engage with various chains and platforms. Binance NFTs shared some sneak peeks about the LAND sale before the event.

The Dvision Network LAND Mystery Box Collection, according to a tweet from them, will include LAND lots with 14 different parcel sizes and locations. A premium lot, which is thought to be the most opulent, is anticipated to be given to a lucky NFT holder. It was claimed to be a 3 by 3 LAND lot situated in either Hong Kong or Amsterdam Meta-Cities.

In a different tweet, Binance NFT added that virtual lots from the Amsterdam Meta-City and Hong Kong Meta-City can both be customized. Additionally, users can generate passive income by selling their virtual property or placing advertisements within their specific terrains.

In order to participate in the 4th LAND Sale, users had three options. The first is that they can use BNB chain-based DVI tokens to purchase mystery boxes on the Dvision Marketplace. Second, they can buy land through GameFi.org, and third, they can use BUSD to buy it through Binance NFT marketplaces (BNB Chain).

The aforementioned mystery boxes are anticipated to have a chance to win a full-spec LAND in Hong Kong or Amsterdam worth between 1 and 3 premiums. According to reports, Amsterdam and Hong Kong each have 1,496 LAND lots or 2,285 PARCELs available for purchase in their respective markets.

According to additional information regarding the sale, GameFi will receive 920 units, Binance NFT will receive 1,538 units, and Dvision will retain 626 units. A mystery box costs 90 BUSD, and it is anticipated that this will raise a total of 80,000 BUSD. Additionally, users are only permitted to buy a total of 20 boxes per wallet. Although it was stated that everyone was free to participate, the LAND sale was to be on a “first come, first serve” basis.