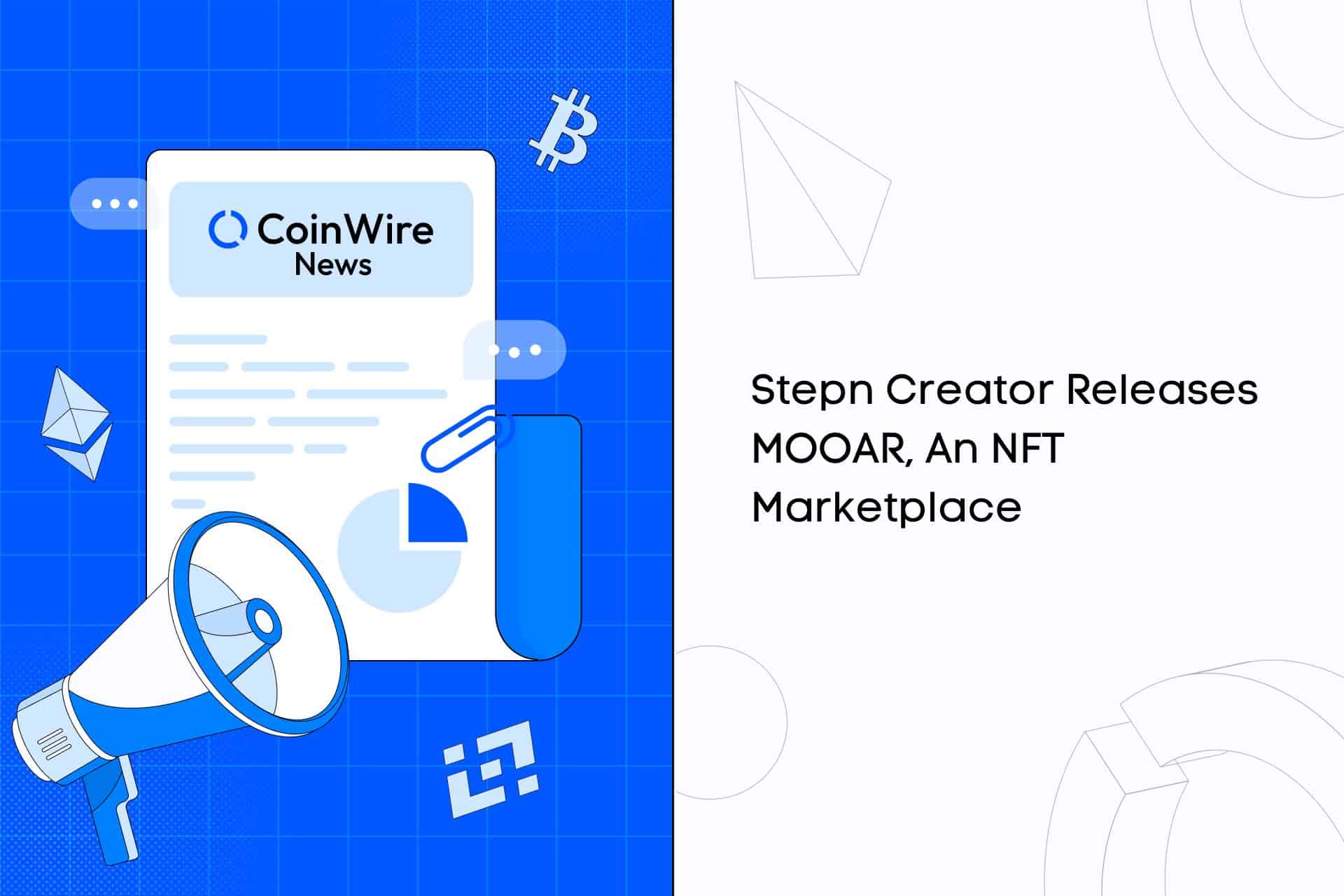 Stepn Creator on the Move Again! As it releases the MOOAR, a NFT marketplace that charges monthly subscription instead of having a cut back on NFT sales while it also enforces royalties.

Many of the marketplaces in the NFT space have a history of rejecting creator royalties and only offering optional or zero royalty models. These strategies are about to end as MOOAR, a new NFT marketplace from the makers of Stepn, emerges. MOOAR has a distinctive membership model and enforces royalties.

According to reports, MOOAR supports NFTs that were created on Solana and Ethereum, as well as Stepn’s own digital sneakers. Additionally, this NFT marketplace supports NFTs from other blockchains. It is anticipated that, as decided by GMT token holders, it will have a launchpad specifically for introducing new projects from outside creators.

On secondary market sales, MOOAR is anticipated to impose a creator-set royalty of 0.5% to 10% of the sale price. In contrast to other marketplaces, MOOAR will not reduce its own fee but instead charge a $29.90 monthly subscription fee for users to transact.

Find Satoshi Labs, the parent company of the move-to-earn application Stepn, has launched MOOAR, a multi-chain non-fungible token (NFT) marketplace that is membership-based. Together with the already-existing Stepn fitness app and DOOAR, a decentralized exchange with a Solana, California, base, this new marketplace aids the aforementioned company in advancing the development of its self-sustaining ecosystem (DEX).

Users of MOOAR would be able to directly buy the sneakers required for Stepn, as well as build and sell NFT collections on the corresponding platform. According to a press release from the sad platform, the main objective is for the three apps to cooperate and actively support one another. MOOAR is anticipated to have no optional royalties and no platform fees.

We can recall that popular NFT platforms like X2Y2, Magic Eden, and LooksRare were known to have already dropped their demands that creators be paid royalties when buying tokens over the past two months. According to Shiti Rastogi Manghani, the COO of Stepn, being unable to fully support the artist will eventually have a negative impact on the value of their specific digital asset. He also emphasized that MOOAR aims to fairly compensate creators.

He elaborated on his earlier statement to support it, saying that the “detrimental factor” is already having an adverse effect on other platforms that are known to have started with 0% royalty fees, which has led to a decline in volume. In which he claimed that by supporting the creators and wanting to enforce this rule in the fee structure, they are adopting a “hard and strong” stance. With a default rate of 2%, the creators who wish to sell their works on MOOAR would be able to set royalty fees that range from 0.5% to 10%.

A Glimpse on the History of MOOAR

The COO of Stepn developer Find Satoshi Lab acknowledged that it has been and continues to be difficult to find adoption for a Web3 platform that comes with a monthly subscription cost rather than a small cut of the NFT sale. However, many serious traders are in favor of the almost $30 monthly subscription, which they said is less than the NFT cut.

She went on to say that they are undergoing a membership model just like any other utility applications in the Web2 space. She acknowledged that it will be difficult for them to build and grow, but that they are confident because their initiative is motivated by long-term value.

The launch of this unusual (in a good way) marketplace occurred as rival marketplaces began to undercut one another, which ultimately had an impact on the revenue streams of the creators. These rival marketplaces chose to ignore creator royalties or to let traders decide whether or not to honor them, a practice that has been dubbed “race to the bottom.”

Although Solana Space is credited with starting this trend back in the summer of this year, that did not last long as competitors who shun royalties have been eating into the market share of top platform Magic Eden recently. The creator royalties were eventually made optional by Magic Eden, who ultimately followed suit. LooksRare did the same in the Ethereum space by moving against creator royalties.

The most recent initiative by Find Satoshi to broaden the ecosystem surrounding Stepn is MOOAR, which has been in development for a number of months. Prior to these, the business launched DOOAR in June. This is their own decentralized exchange (DEX), and according to the number of active wallets, it is one of the most popular DEXs on Solana.

This encapsulates the idea that this initiative is not just intended to fight the anti-royalties trend. Manghani defended the creators who view ongoing royalties as a crucial source of income and an integral part of the decentralized Web3 ethos when asked about their position on the trend.

In which she argued, “Why would I ever partner, collaborate, or work with someone who would not reward me or my project? I am a creator, a builder, and a founder. In this passage, she made reference to Web 2 platforms like social media sites that rely on the work of creators to grow and pay them as well as streaming media platforms.

She feels that the NFT marketplaces’ disregard for the creator-set royalties represents a rejection of Web3 principles. She went on to say that Web3 was developed to change that, but she also questioned what good Web3 was now that organizations were once again centralizing the platform and abusing it. She was adamant in saying that these don’t sit well.