by Crypto Daily Team
in Guides 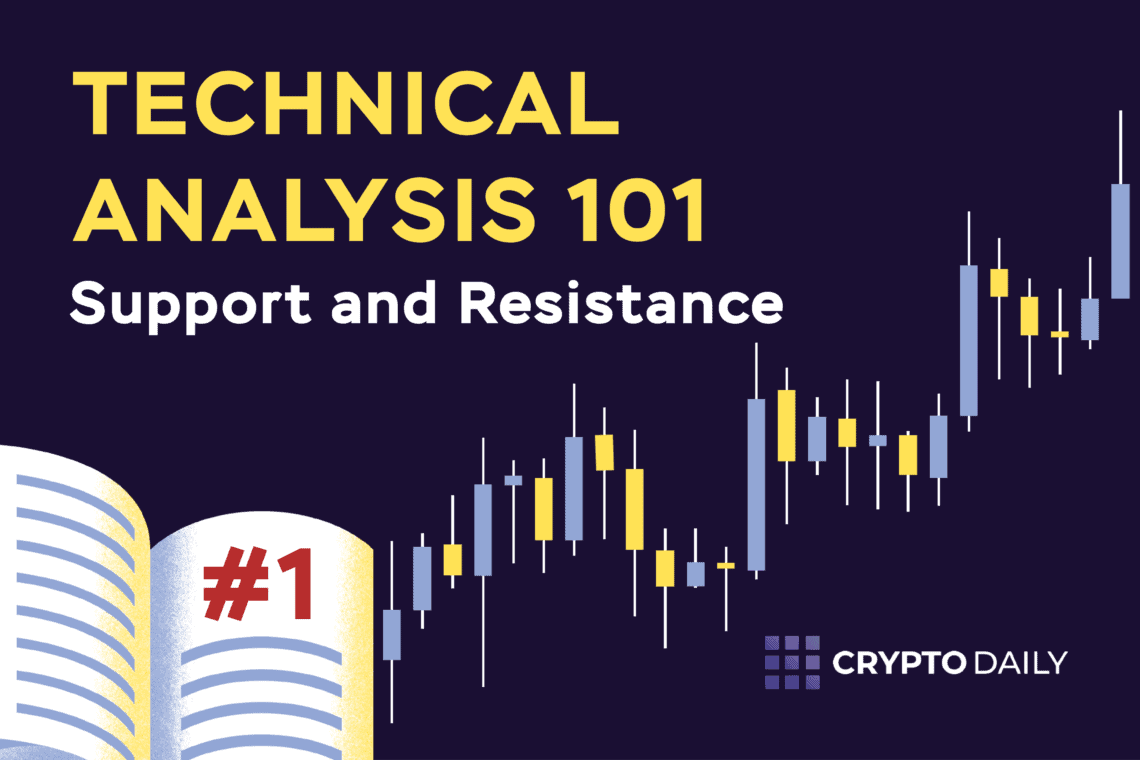 Support and resistance are two of the most basic concepts of technical analysis in financial markets. These terms are applied to any market, including stocks, forex, gold or cryptocurrencies.

At first glance, support and resistance may seem easy to understand, however, as you read more, you will find out that these levels may take different forms under different market conditions and you will have to study a lot of charts to master them. In today’s article, we will dive into the basics of support and resistance so that you can get an overall idea about these concepts.

Support and resistance levels are points where the price is unable to break through, which acts as a type of barrier. With support, it’s a floor underneath the price which is held several times. In other words, the price has gone down and bounced off that level lots of times. While in the case of resistance, the price finds a ceiling. You just can simply note that support happens when there’s a concentration of demand, while resistance happens when there’s a concentration of supply.

While support and resistance are traditionally represented by lines, real-world situations are rarely this exact. You should keep in mind that the markets aren’t governed by any physical laws that prevent them from breaking through a certain level. That’s the reason why it is more useful to interpret support and resistance as areas. These areas are the ones that will drive activity from traders.

Let’s take a closer look at support through an example below.

In the morning, the price goes down to $50.00, then moves down to $49.90 before moving higher. At the end of the day, the price reaches $49.95 before going back up to close at $51. We can see that there are 3 support levels created, which together form a support area. Support areas are considered significantly more important than a single level since it indicates that the market tried to breach the region many times but failed. In this example, the support area ranges from $49.90 to $50.00.

Now, let’s look at an example of resistance.

How to use support and resistance levels?

Market psychology plays a vital role in creating support and resistance levels. Market participants will remember the previous price levels that witnessed increased interest and trading activity. There are situations that many traders may mark the same levels, which bring increased liquidity. As a result, the support and resistance areas are frequently used by huge traders (also known as whales) to join or exit positions.

Generally, support and resistance are used for both trading and analysis.

Another important thing to consider is how these levels may react to changes in context. When an area of support is broken, it may turn into an area of resistance. Or, when a resistance level is broken, it can subsequently be retested and turned into a support level afterwards. A support-resistance flip is a term used to describe these patterns. Some people make the mistake of assuming that they should go short when the price falls below a support level. However, it depends on the context. During an uptrend, the drop of price below support level doesn’t mean that a short trade should be placed. It just indicates that the price is beginning to fall further. Taking trades by entering near the support area is preferable to taking short trades during uptrends even if support breaks.

During a downtrend, buying at support areas is not recommended since the price tends to drop further. Instead, you should go for a short near resistance area. Even if the price breaks through resistance, remember to favor short trades as long as the downtrend still takes place.

Support or resistance breakouts happen if the price passes through a support/resistance area, it’s called a breakout. For example, if the price of a cryptocurrency has frequently gone up to $100 but has been unable to break above that level, $100 is a resistance level. A breakout will occur when the price ultimately swings above $100. On the other hand, if the price reaches a resistance or support level but can’t break through, we call it a test (the level was tested).

A false breakout occurs when the price moves swiftly back to the support/resistance zone it just broke out of. For example, if a cryptocurrency moves over the resistance at $100, that’s called a breakout. However, if the price falls back below $100 shortly after and continues to decrease, we call it a false breakout.

How to Transfer Crypto from Coinbase to Coinbase Pro

How to Open a Binance Account and Start Trading – Beginner Tutorial

How to Earn Crypto For Free

How to Add Polygon (MATIC) to Your MetaMask Wallet

How to Stake Axie Infinity

How to Send BNB to MetaMask