Yuga Labs Under SEC’s Investigation Due to Alleged Violations in the Federal Laws; Legal Experts Shared Their Opinions 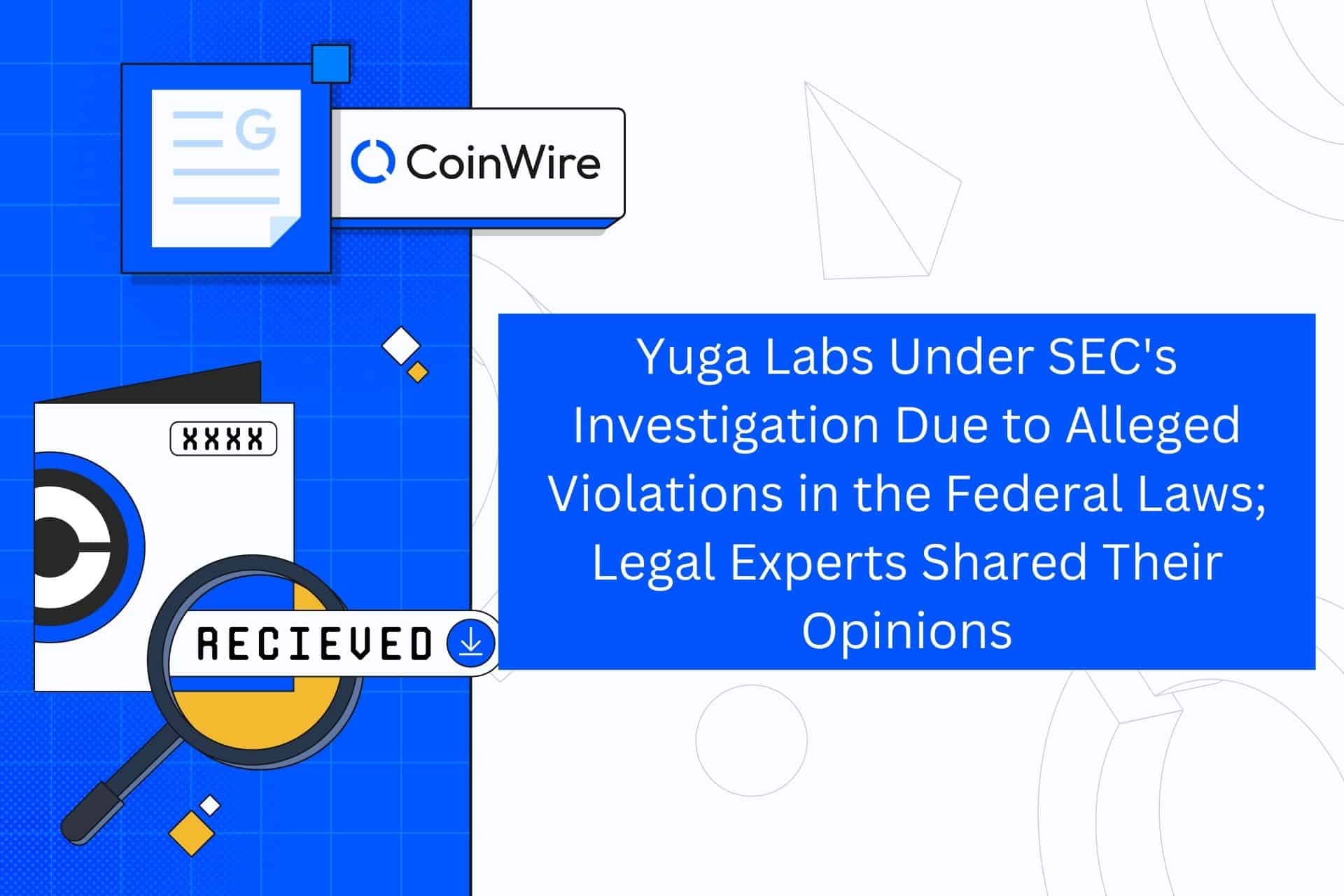 The BAYC NFT collection is being investigated to determine whether sales comply with federal law, while the distribution of the ApeCoin token is the subject of an inquiry by the US Securities and Exchange Commission, in which Yuga Labs has participated.

The United States Securities and Exchange Commission has a broad inquiry into the NFT market going back to March of this year, according to a report released last October 12 on Yuga Labs. Yuga Labs is reportedly under investigation due to claims that certain of its NFTs are “more equivalent to stocks” and due to claims that some sales of its particular digital assets broke federal laws.

Although these reports could damage Yuga Labs’ reputation, the company remained upbeat and asserted that legislators and regulators should seek to understand the unique Web3 industry. Additionally, they pledged to fully cooperate with any questions that may arise.

The SEC is now just looking at Yuga Labs, however they are also monitoring a number of other NFTs and fractional NFTs that may eventually be subject to federal securities laws. According to a report, several NFT developers and market places are being investigated over claims that they are using some NFTs to generate capital in the same way as regular securities.

The announcement that Yuga Labs is the subject of an SEC investigation has generated a lot of discussion in online crypto groups and sent shockwaves across the NFT industry as a whole. The aforementioned examination would demonstrate whether or not the ApeCoin tokens and BAYC NFT sales adhere to federal legislation. It was alleged that the SEC investigation is confidential, yet the original source of the aforementioned news was not identified.

The SEC began looking into the NFT market back in March 2022, when US regulators began to wonder whether digital assets were being used to generate capital in the same way as traditional securities. This probe is still ongoing, and it keeps becoming bigger as we approach the final quarter of the year.

Despite the likelihood that this probe will damage Yuga Labs’ reputation, they continue to be optimistic and to work closely with regulators and lawmakers. The business has further committed to working with other Web3 companies and their respective collaborators to shape the Web3 ecosystem.

Along with the sales problem, there are also distribution problems with the Ethereum-based governance and utility token created by the Yuga Labs — ApeCoin DAO members that are being looked at.

The holders of the Bored Ape Kennel Club and Mutant Ape & Bored Ape Yacht Club members apparently received the ApeCoin tokens, according to the article. In which the APE community receives 62% of the aforementioned coin’s 1 billion quantity. A total of 16 of these funds are given to Yuga Labs and a charitable organization, 14% to launch contributors, and 8% to the BAYC founders.

By the end of April 2022, the price of ApeCoin, which currently costs over $23, was predicted to skyrocket. Unfortunately, the cost of the investigative report dropped significantly after it was published in October; it is now $4.08 at the time of writing.

Experts Opinion on the Investigation

Experts have all agreed, while having widely divergent views, that it would have a seismic impact if the SEC decided to take its investigation into Yuga Labs further. The likelihood of regulatory enforcement action is higher than he had anticipated, according to artist and NFT expert Alfred Steiner. Ryder Ripps is a conceptual artist and provocateur who is the focus of Yuga Labs’ lawsuit due to a trademark infringement issue, and Steiner is now representing Ripps in court.

Steiner was shocked to learn that Yuga Labs is now under investigation because, even before the news broke, he had assumed that the SEC would never target BAYC and other prestigious NFT collections because the majority of the 10,000 Bored Ape NFTs in circulation can be identified by different visual characteristics. The aforementioned characteristics were predicted to transform NFTs from securities into more works of art.

Steiner was opposed by other legal authorities who asserted that they had already foreseen the imminent escalation of this probe. where University of Kentucky law professor Brian Fyre said that he is not surprised and has anticipated it in the last two years.

He continued by saying that at the end of the day, the BAYC NFT collection from Yuga Labs is merely an investment. He also explained why the SEC’s efforts to regulate the NFT market will initially focus on blue chip NFTs or well-known NFT companies. He claimed that consumers purchase NFTs or digital assets from companies like these not for their intrinsic creative merit but rather for their collective reputations. It was comparable to investing in equities from well-known firms like Disney.