The Ultimate Guide to Decentralized Finance

by Crypto Daily Team
in Guides 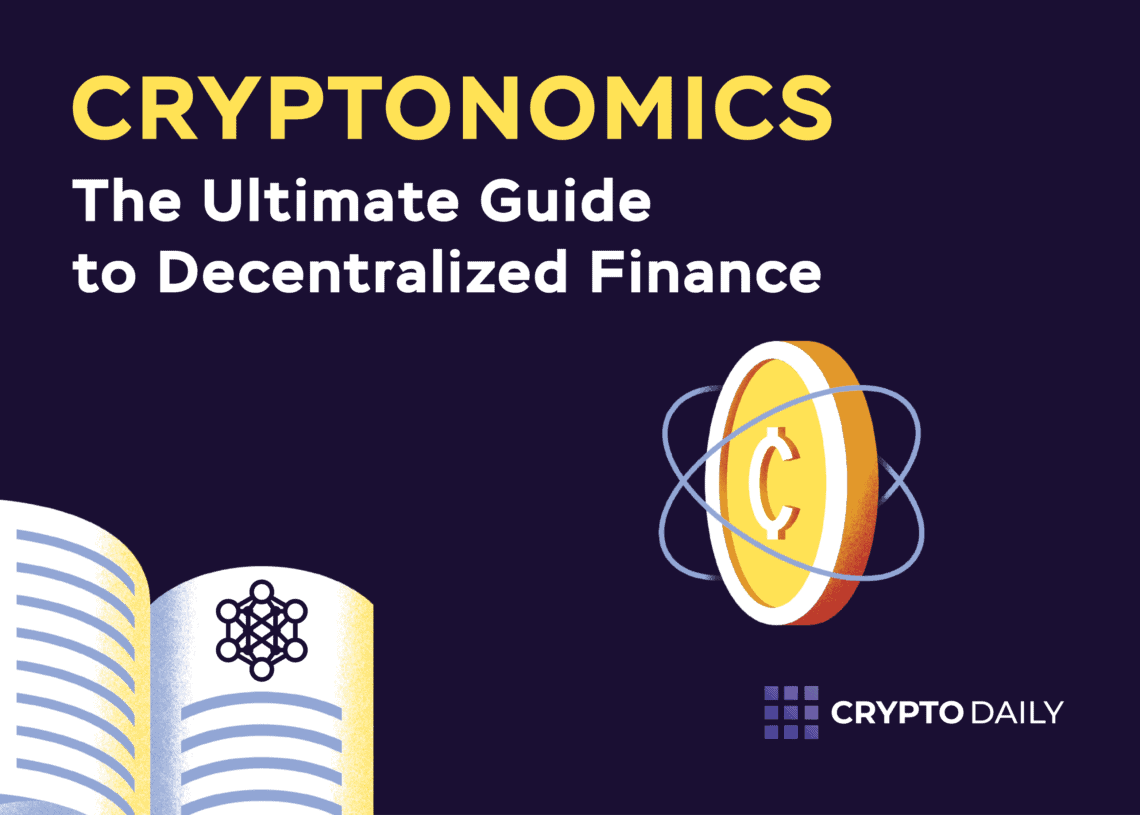 Decentralized finance is one of the most popular terms in the blockchain industry recently and it’s considered an alternative to traditional financial services. DeFi, in particular, is made up of smart contracts that power decentralized apps (dApps) and protocols. Many of the first DeFi applications were developed on Ethereum, and it still holds most of the ecosystem’s total value locked (TVL). In April 2021, it reported that total value locked in DeFi surpassed $50 billion, which proves that people in this industry are highly interested in this democratic, decentralized approach to finance.

With DeFi, users can have full control over their assets and engage with the ecosystem through peer-to-peer (P2P) and decentralized applications (dApps).

The development and execution of smart contracts is essential to most of the existing and potential DeFi applications. A smart contract, unlike a traditional contract, employs computer code to describe the relationship between the parties participating in the contract.

When the preset criteria of a smart contract are met, the code will automatically execute. This means that the contract is settled without the need for human intervention.

Smart contracts are more efficient, easier to use, and lower risk for both parties. Smart contracts, on the other hand, create new sorts of hazards. Because computer code is prone to flaws and weaknesses, smart contracts’ value and sensitive information are at danger.

The code of a smart contract is permanently stored on the public blockchain where it is used. This allows for some of DeFi’s most innovative features, such as:

Ethereum has a huge edge in terms of decentralized finance since it was the first blockchain network to provide a programming language capable of constructing smart contracts. Being the pioneer in the field, many developers interested in investigating blockchain technology’s possibilities beyond Bitcoin began experimenting with the network immediately after its introduction.

At the end of 2020, it is recorded that there were approximately 130,000 developers participating in the well-known Ethereum’s development suite, called Infura. It also indicates a growth of 87% compared to last year. Also, in April 2021, there are 251 DeFi projects in total, and 215 of them are built on Ethereum.

Apart from Ethereum, which is the leader in the DeFi sector, there are also other blockchains that are building a decentralized finance ecosystem themselves.

“Ethereum killers” is a term used to describe these smart contract-enabled chains. Such networks, according to their proponents, can be able to fix Ethereum’s shortcomings. They believe it’s just a matter of time until developers abandon the original smart contract platform in favor of developing on a new blockchain.

One of the biggest problems of Ethereum is its high transaction fees. Since the architecture of the network is built to maximize decentralization, it necessitates enticing as many non-trusting and distributed transaction validators as possible.

The amount of transactions that may fit in a single block is restricted in order to keep hardware demands low. However, due to Ethereum’s growing popularity — mostly due to DeFi — blocks are frequently entirely filled. Those who want to transact must thus outbid other users when submitting transactions. The growing transaction fees make it more difficult for retail users looking to interact with Ethereum dApps.

The upgrade to Ethereum 2.0 intends to address this issue. However, it’s still unclear when this rollout will be. Meanwhile, developers are starting to shift to cheaper alternatives.

To assure great performance, these “Ethereum killers” frequently utilize consensus processes that speed up transaction processing, layered designs that reduce competition for block space, alternate data storage techniques, and other improvements. While these modifications can result in networks with considerably higher transaction throughput than Ethereum, they frequently come at the expense of decentralization.

Several of the blockchains mentioned above allow Ethereum-native apps to be deployed right away, which allow developers to migrate projects from Ethereum’s overcrowded network to a more economically viable blockchain. SushiSwap, a prominent decentralized exchange, just launched on Avalanche after finding its success on Ethereum.

What is DeFi used for?

One of the most popular types of applications in the DeFi ecosystem is open lending protocols. The advantages of open, decentralized borrowing and lending over the traditional credit system are numerous, including instant transaction settlement, the capacity to collateralize digital assets, no credit checks, and the possibility of future standardization.

Some of the popular DeFi lending protocols are Aave and Compound. Lenders provide funds to money markets created by protocols in exchange for algorithmically calculated interest payments. Users must submit collateral to a smart contract when borrowing from a platform like Compound.

To safeguard systems against the large price swings associated with digital assets, DeFi protocols typically need over-collateralization — that is, the backing of loaned money with more capital than is borrowed. The collateral minimizes the lender’s risk if the user is unable to repay their obligation for whatever reason.

Currency exchange is one of the major pillars of the traditional financial system that is reflected in DeFi. DEXes allow users to exchange one cryptocurrency for another without requiring cash to be held by a central authority. DEX platforms are divided into two types:

DEXes with order books connect buyers and sellers to make trading easier. On-chain order book DEXes, such as Bitshares, rely on node networks to maintain a consistent order history. This approach includes a large number of on-chain transactions, which raises the need for block space on the corresponding network substantially.

The automated market maker model, as introduced by Uniswap, changed the notion of decentralized exchanges. Liquidity pools replace traditional order books in AMM protocols. When a trader buys or sells a cryptocurrency on an AMM DEX, they add one of the trading pair’s assets to the pool while taking out the other. Other AMM DEXes include SushiSwap and Bancor.

Stablecoins are an important element of the decentralized financial industry because of the extreme volatility of cryptocurrencies. The rapid price swings of crypto assets have an impact on lending, borrowing, trading, and other financial operations, especially when several assets are involved.

By offering digital assets that are tied to more consistently valued currencies, stablecoins decrease the dangers caused by volatility. Stablecoins, which were originally designed to allow traders to convert their BTC and other crypto assets into something more stable, serve a similar role in DeFi.

There are three main types of stablecoins today, including:

Derivatives are agreements between two or more parties that specify how one party must pay the other. Options, futures, and swaps are examples of derivatives.

Derivatives are frequently employed to hedge risk. A commodities producer, for example, might hedge against price volatility by entering into a futures contract that locks in a sale price at a specific date, regardless of the market price. Similarly, in the cryptocurrency business, firms may use futures contracts to hedge their exposure to extremely volatile crypto assets.

Derivatives are also commonly used for speculation purposes as they allow traders to bet on price movements without having to possess the underlying asset. Contracts are frequently leveraged with borrowed cash as a result. Leveraging a position raises both the risks and the possible profits.

The challenges of DeFi

The future of DeFi

DeFi is one of the most interesting and fastest-growing areas of the cryptocurrency industry. The usage of smart contracts implemented on permissionless networks allows individuals who are normally excluded from financial services to have access to them.

Despite the fact that DeFi is still in its early stages, significant DeFi ecosystems have already absorbed more than $50 billion in funding. This trend is expected to continue, especially as Ethereum transaction prices push developers and consumers to other blockchains like Solana, EOS, Polkadot, and others.

Many of the conventional financial industry’s key pillars are already represented in DeFi. Decentralized lending, borrowing, trading, and insurance solutions have all garnered substantial user bases.

However, DeFi has a long way to go since there are many challenges and errors in the system that need to be fixed.

If DeFi succeeds, it will transfer authority from huge centralized companies to the open-source community and individual users. Once DeFi is ready for widespread use, it will be determined whether this will result in a more efficient financial system.

How to Open a Binance Account and Start Trading – Beginner Tutorial

How to Earn Crypto For Free

How to Add Polygon (MATIC) to Your MetaMask Wallet

How to Stake Axie Infinity

How to Send BNB to MetaMask

How to Add Binance Smart Chain to MetaMask