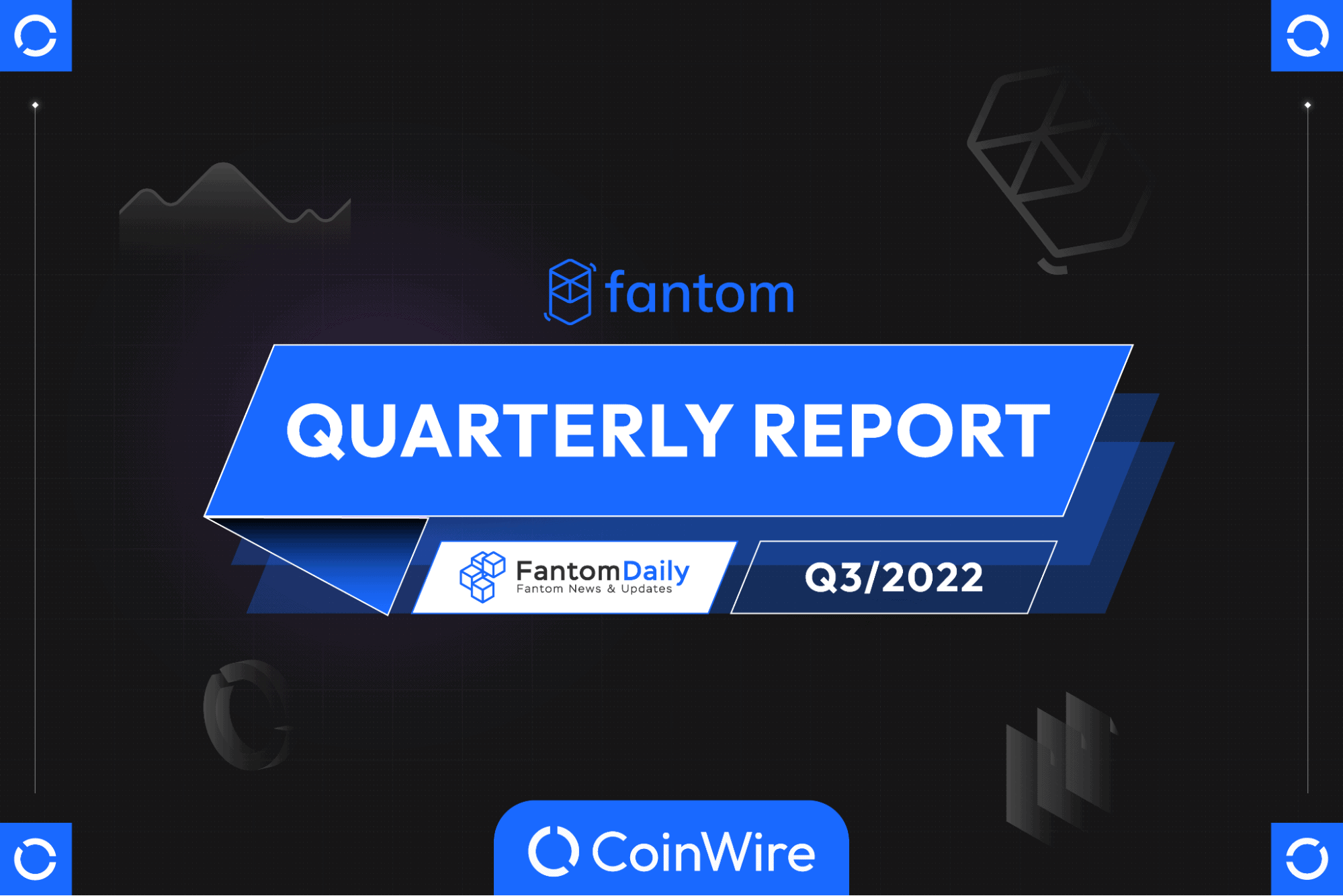 The bearish situation from the last Q2 seems to cool down in Q3 2022. The main theme of Fantom this quarter is Building and Upgrading. Fantom chooses the vertical scaling method to improve core technology and solve current problems.

After the Q2 plummet with the macro-induced meltdown and Terra’s collapse, the storm has passed in this quarter. Fantom experienced a stabilized status at a relatively low level compared to previous quarters. Although there were some rebounds, Fantom has still struggled to regain the previous level.

Market Cap and Total Value Locked have received significant declines, especially if we compare them to Q1. The Average Daily Transaction and Average Daily Active Addresses received a slighter decrease.

Fortunately, there are some positive signals. Total Revenue has still steadily grown, while the Average Daily Gas Used rebounded, reaching close to Q1, even though the gas fee of Fantom has been significantly reduced since the Snapsync update.

With the Snapsync upgrade, gas fees on the Fantom Opera network are significantly reduced, at least 10 times cheaper. the Average Gas Fee in Q1 and Q2 was around $0,00003, in Q3 users now only have to pay a $0,000001 gas fee for a transaction on Fantom.

Fantom is now currently one of the Layer-1 Blockchain with the cheapest gas fee on the market, far cheaper than other EVM-Blockchain such as Ethereum, BNB Chain, Polygon, or Avalanche; and can now compete with Solana

Fantom has burned 30% of its transaction fees since May 2022. The FTM supply will now be reduced throughout the time, which means FTM is deflationary, and the price will increase in the ideal condition.

Currently,  FTM has been burned forever from the token supply at the time this report is written.

With the main theme being Building & Upgrading, there are many project updates, notable news, events, and partnerships that happened in Q3 2022 of the Fantom ecosystem.

Highlight Event: Ethereum’s The Merge & The Effects to Fantom

The Merge upgrade is Ethereum’s migration from a “Proof-of-Work” consensus mechanism to a “Proof-of-Stake”. The purpose is to reduce Ethereum’s power consumption while increasing decentralization, scalability, and security.

For Fantom, The Merge has some short-term impacts. Ethereum can get all the spotlights & drain liquidity and users from other blockchains. Also, in such a big event, high market volatility is inevitable, as Ethereum is the altcoin leader.

However, The Merge would not  transaction speed & gas fees. At least until Ethereum completes all five of its major updates, Fantom will not be affected much.

The Ecosystem Support Vault empowers the Fantom community of validators and stakers as part of the ongoing decentralization evolution of Fantom. This Vault will offer a different route for supporting ideas, initiatives, and creations on the Opera network through community-driven decisions.

SpiritSwap is one of the biggest DEX on Fantom that was originally based on Uniswap. However, with the release of SpiritSwap v2, the protocol has stepped away from the original design, bringing a unique experience to the Fantom community.

A new bridge aggregator with a “swap while bridging” function alongside new BribeUI for inSPIRIT will also be introduced in this v2.

functions like Yield Farming, Lending and Borrowing, inSPIRIT with veTokenomic, etc. into one mega-hub, SpiritSwap v2 is a one-stop shop for all things DeFi 2.0 on Fantom!

Magic Craft is  PVP game, where players can join and  to earn MCRT as a reward. Each character is an NFT that can be traded  a Marketplace and Staked for further rewards.

Magic Craft is in the final step, with the first  of gameplay  and NFT heroes, alongside a revamped combined with a strong community the MCRT token skyrocketed in price and became one of the most traded tokens in the Fantom ecosystem.

Q3 was a busy period for Hector Network with lots of great partnerships and project updates. The main spotlight was the strategic partnership with Borussia Dortmund – one of the biggest football clubs in the world.

With the current rapid progress & a large upcoming Web3 ecosystem, Hector Network will easily get the No.1 position in the Fantom Opera chain.

With the macro economy still having a lot of instability, the long-term bear crypto market is expected . Therefore, the Fantom ecosystem cannot have significant growth at least until the end of 2022.

In the Vertical Block Podcast, Fantom mentioned the goal of Vertical Scaling. This is clearly shown in this Q3 with many infrastructure upgrades, such as the  of Watchdog; partnerships with node providers & venture capitals; governance proposals, etc.

On the other hand, Fantom needs to increase its marketing activities to further expand its brand name and push its native projects to compete in a larger field.

DeFi protocols on Fantom while still constantly changing & releasing new updates, like Spirit Swap v2 or Liquid Driver v3; none of them can make a great enough impact or no new breakthrough projects to attract cash flow into the ecosystem like Solidly did in Q1 2022.

There are a large number of DeFi dApps on Fantom, but only a few big ones are actually active. Many native protocols on Fantom are recently moving to the more active or trending blockchain, for example, Velodrome – Optimism. This raises a lot of questions about if Fantom can  in the future.

The Fantom ecosystem is expanding into more categories in this Q3. NFT & GameFi is the most notable trend on Fantom.

The NFT Volume & Sales on Paint Swap – the largest Marketplace has shown an increase in NFT Collections trading volume in this Q3, despite the lower number of sales. This proves that NFT on Fantom is not only more active, but NFT collections are also more valuable than before.

However, although the number of projects is increasing, until now no name has been able to make a great breakthrough that is enough to make NFT & GameFi into a real trend on Fantom.

The NFT collection sector, although many in number, have yet to have a name that is strong enough to create a fever. Meanwhile, GameFi projects are still mainly multichain ones while native projects, either haven’t launched yet or are not really prominent.

With the  of Building & Upgrading, the Fantom ecosystem in Q3 has many notable highlights, project updates, and partnerships.

However, as the harsh macroeconomic situation is still on while there is no great breakthrough in any project on the ecosystem, Fantom will have a long way to go to its glory days in the near future. Nevertheless, with solid steps from Fantom and the native projects, the future of the Fantom ecosystem is still very bright.

This report is for informational purposes only, not financial advice. This is not a recommendation to purchase tokens or any other assets. Any investments made with the mentioned projects or assets are up to your own responsibility.