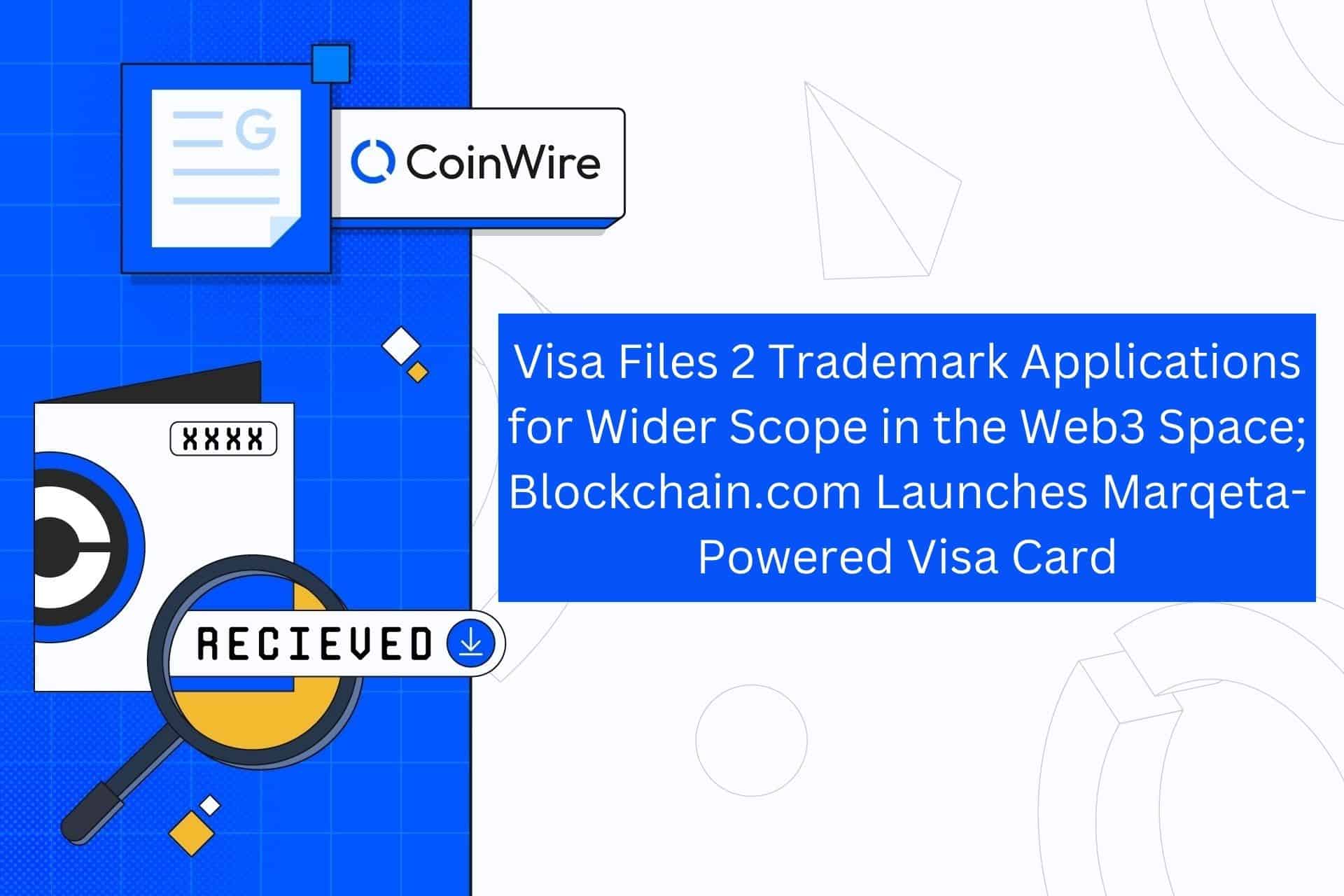 As Blockchain.com officially launches the Visa card powered by Marqeta’s APIs, Visa submitted two trademark applications to the USPTO in relation to digital wallets, non-fungible tokens, and the metaverse.

In connection with digital wallets, non-fungible tokens, and the metaverse, Visa filed two trademark applications with the USPTO (United States Patent and Trademark Office) on October 2.

This occurs at the same time that Blockchain.com formally introduces the Visa card that uses Marqeta’s APIs. The aforementioned debit card will initially only be accessible to US users, but by 2023, the jurisdiction is anticipated to expand.

Visa, a major player in payments, submitted two trademark applications to the USPTO (United States Patent and Trademark Office) on October 2 in relation to digital wallets, non-fungible tokens, and the metaverse.

The second section of the application focuses on enabling users to use their non-download software to view, access, store, monitor, manage, trade, send, receive, transmit, and exchange digital currency, virtual currency, cryptocurrency, digital and blockchain assets, and NFTS on a temporary basis.

Many people in the industry were not surprised by Visa’s application because it simply followed in the footsteps of other major corporations that have submitted applications similar to this in the recent past, including American Express and the New York Stock Exchange.

This is not the first application that Visa has submitted; back in 2020, the payment industry giant also submitted a patent application for a method of digitizing fiat money. The company is continuously investigating technologies that might result in new payment innovations and greater financial inclusion, according to a spokesperson for the organization.

As of right now, US citizens can use the Visa car that Blockchain.com has formally launched, which is powered by Marqeta’s open APIs. With the Visa card, users would be able to spend the fiat money and cryptocurrencies stored in their Blockchain.com Wallet without paying any additional fees and with the added benefit of earning back about 1% of their original investment almost anywhere Visa debit cards are accepted.

The Visa card reportedly already has 50,000 waitlist sign-ups at launch, and it is anticipated that more Blockchain.com users will sign up as the digital asset exchange opens up access to users in more locations by 2023, when the Visa card is anticipated to be available in more nations. Blockchain.com is known to have a wallet, an exchange, a data-rich explorer, and a custom institutional business, and it is said to have over 80 million users across 200 countries.

According to the report, Marqeta would use open APIs to build the Visa card. Marqeta is recognized as a platform for issuing cards that assisted Blockchain.com in developing unique payment cards for each of its users.

Marqeta’s open APIs would enable users to create adaptable and customizable payment experiences while also speeding up product development and democratizing access to card-issuing technology. Blockchain.com’s card programs would be managed and launched by Marqeta, and the company could also issue cards, authorize transactions, and settle them.

Aside from their trademark application and the newest Visa card offered by Blackchain.com, Visa has been involved in a number of Web3-related projects where they have collaborated with other businesses to provide credit and debit cards linked to cryptocurrency payments.

Before it was seen buying its “punk” from the relevant CryptoPunk collection, Visa announced their NFT program, which supports the aforementioned industry, back in October of last year. According to reports, one of the straws that will significantly contribute to the growth of Web3 adoption and its increased global acceptance is Visa.

Visa hopes to accelerate the adoption of cryptocurrencies with their forays into the Web3 market. Another noteworthy We3 space project of the payment behemoth is its collaboration with FTX, which aims to roll out crypto debit cards in 40 nations.

In the Web3 sector, which includes but is not limited to Coinbase, Binance, and Crypto.com, Visa was also seen to have partnered with a number of other large companies last year. This partnership is reportedly intended to boost the adoption of Web3 while also accelerating card programs.

Additionally, Visa CEO Charles Scharf said last year that the company is willing to accept Bitcoin if there is sufficient customer demand. These alliances and assertions made it even more obvious that Visa has specific goals for the Web3 market. Not only is Visa focusing on the Web3 market, but Western Union and PayPal have also been spotted exploring the blockchain market.