Deep Dive #19 | Decentraland | Create, explore and trade in the first-ever virtual world owned by its users 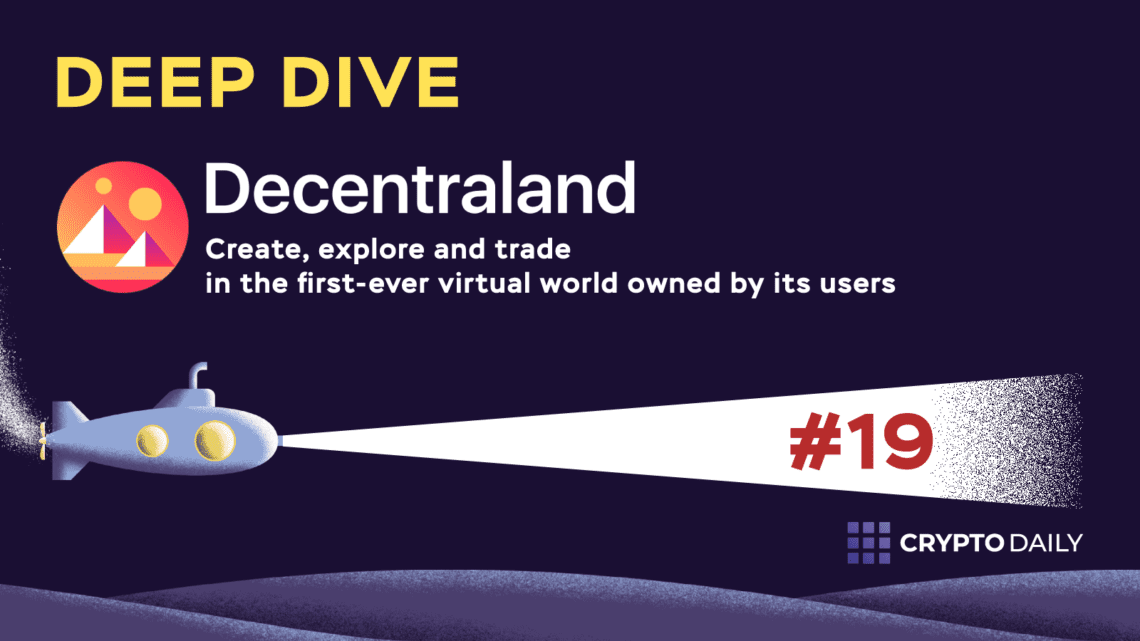 Real estate has long been a profitable investment channel favored by many people. Still, not everyone can participate in this form of investment because it has complicated legal procedural barriers, which are highly demanded.

Thanks to the development of new technologies such as VR and AR, today has brought the virtual world closer to our physical world. Decentraland was born in such a context. It creates a world where we can do everything with limited land, just like in real life. Each land in the game is a unique and high-value NFT. For example, last June of 2021, Decentraland sold $913,000 on 259 parcels in the game to a virtual property developer. So what brings such high value to the land in the game? Let’s find out together.

Decentraland offers players the ability to own virtual real estate. Once the player has purchased the land, they can do whatever they want with the land. They are creative, build as they like, and have full control over the land. Players can enter the casino, attend seminars, watch live music, go shopping with friends, visit underwater resorts, drive their dream car, start a business, and much more. All of the activities will be experienced inside a 360-degree virtual world. In short, Decentraland is a parallel world to the world we live in, a “Matrix” world built on Blockchain and VR technology.

After logging in to the game, players must choose a virtual representation of themselves. They can customize their avatar. Besides hundreds of free outfits to choose from, players can use MANA to purchase unique clothing items and create an avatar with its own personality. Each avatar has a Decentraland passport, which connects to an Ethereum compatible wallet where all their MANA and items are recorded.

LAND is a Non-Fungible Token of Decentraland. Anyone can own LAND by buying it, and have the right to do with that LAND is up to the user’s needs. Each LAND will have a coordinate address (x,y), and once players own the LAND, it is valid forever unless players sell it.

The function of Builder in-game

If players use MANA to buy a LAND, they will become builders, adding scenes or entire environments to the LAND. Players do not need to know write code; Decentraland has a large pool of pre-built scenes that can be applied to any LAND for players to choose what they want. Thanks to the Decentraland open-source technology, these have all been contributed. There are thousands of scenes to choose from, including the most basic rough drafts to fully developed forests, buildings, and even villas.

To create a vivid, more realistic world, Decentraland has built according to the periods corresponding to the real world, including:

Stone Age: At the beginning of 2015, Decentraland, with its virtual reality platform, creates the opportunity for users to earn money even beyond imagination.

Bronze Age: In 2017, the land at the Decentraland virtual reality platform took a new step forward by sketching 3D space under the connection and support of Blockchain technology.

Iron Age: In 2017, MANA Token with ERC20 allows users to receive parcels of LAND land and interact with other lands.

Paper: Papers are publicly available and transparent. Details can be found at Decentraland Whitepaper.

Github: Public and regular posts. Details can be found at Decentraland · GitHub.

The product status: Currently developing more functions. You can experience it at Decentraland.

MANA is the primary utility and local currency in the game, which plays the main role in the functioning of the Decentraland.  The Token usage will be as follows:

In-game currency: MANA acts as an In-Game Currency in Decentraland. Players can use MANA to buy LAND, with the value of each LAND being 1,000 MANA at the time of ICO.

Governance: MANA holders have voting rights in the Decentraland DAO. To participate in DAO governance, users convert their MANA into a wrapped MANA (wMANA) and lock it in the DAO. Each wMANA represents one vote on governance proposals. Players can buy MANA on exchanges or get it by selling collectibles on Decentraland Marketplace. The DAO also has its own MANA pool to fund its own decisions and activities.

MANA market cap is $1.270B with $185M volume in 24h. The top exchanges for trading in MANA are currently Binance, Tokocrypto, OKEx, Huobi Global, and CoinTiger.

DeFi Games trend that is booming during this time. As expected, this wave is not over yet and could increase even more, especially in the context of the bullish, BTC hit the $46,000 mark again. But be careful, no one knows when this trend will end, and the price of tokens related to games is seemingly overrating. Without a good entry, the consequences will be unpredictable.

The Decentraland protocol for simultaneous users in a decentralized virtual world.

Decentraland players have full control over all land assets they own and have the right to keep all proceeds from the value they generate from other users. That is important because it allows players to earn money from selling their land or building businesses.

Medium: Decentraland – The last posts since 2018.

Reddit: Decentraland – Regularly post updates on the progress of the project and guide to play the game.

According to information from Crunchbase, Decentraland has gone through 3 rounds of funding. At Venture Round, Digital Currency Group invested in the project with an undisclosed amount. Then the project received $500K in Seed Round from Animoca Brands – A global developer leveraging popular brands, gamification, A.I., blockchain, and mobile technology. This Blockchain VR Project Raised New $25M Funding in ICO; some significant investors include Fabric Venture, Genesis One Capital, Fundamental Labs, and George Burke – COO at FounderPool.

Ari Meilich and Esteban Ordano created Decentraland in 2015. The project began as a pixelated grid that allocated pixels to users through a proof-of-work algorithm. Decentraland later evolved into a 3D world, opened to the public in February 2020, and is overseen by the nonprofit Decentraland Foundation.

Esteban Ordano – Advisor: He was the founder of Decentraland until April 2020.

Ari Meilich – Advisor: He used to be the Former Project Lead at Decentraland. Now he is the founder of Big Time Studios, a new game company dedicated to crafting online adventures through space and time.

Xiaolai Li – Advisor: He is the founder of INBlockchain Inc, A venture capital-focused on Meaningful Blockchain Assets.

Justin Waldron – Advisor: Justin Waldron is Co-Founder & President of Playco and previously Co-Founder / EVP of Zynga, the world’s largest mobile game company. Zynga IPO’d in 2011 with a $10 billion valuation and over $1b in annual revenue.

Jake Brukhman – Advisor: Currently Jake is the founder and CEO at CoinFund, a New York-based fund platform focused on investments in blockchain technology and cryptocurrency.

If you are a big fan of Minecraft, then Decentraland is for you. The biggest difference compared to games in the same genre is the Play to earn mechanism, making playing games no longer just for entertainment but can earn high profits. However, with the current explosion of DeFi game trends, players should consider carefully before participating to avoid losing money. Wish you happy gaming!