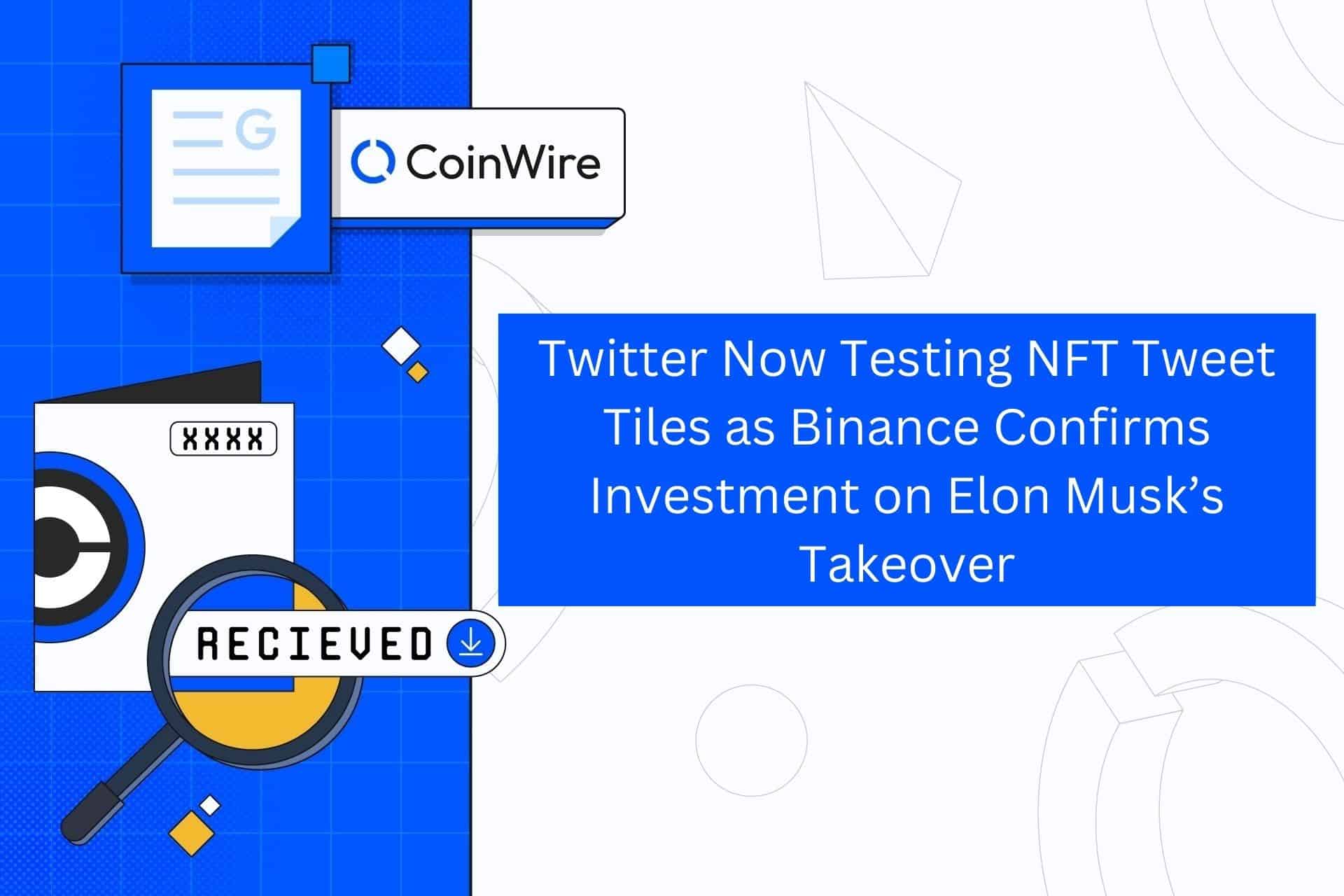 Late on October 27, Elon Musk tweeted the official announcement of his $44 billion acquisition of Twitter. Additionally, Twitter has unveiled a brand-new feature called the NFT Tweet Tiles in association with four marketplaces.

The popular social media site Twitter has been in the news recently for a number of reasons. One of them is that the dominant social media platform, in collaboration with four marketplaces, has unveiled a brand-new feature called the NFT Tweet Tiles, which will enable users to purchase, sell, and display NFTs through tweets. The integration is reportedly compatible with Jump.trade, Rarible, Magic Eden, and Dapper Labs.

Elon Musk, CEO of Tesla and SpaceX, made his $44 billion acquisition of Twitter public late on October 27 through a tweet. He said that preserving a “common digital town square” is his main goal and that the “future of civilization” is what motivates him to make this purchase.

NFT Tweet Tiles, a new feature from Twitter that will let users buy, sell, and display NFTs directly through tweets, have been officially announced as being in testing. This would be accessible to Twitter’s four partner marketplaces, including Magic Eden, a Solana-focused marketplace, Rarible, a multi-platform NFT marketplace protocol, Dapper Labs, the company behind the Flow blockchain, and Jump.trade, a platform focused on sports.

A representative from Twitter claimed that the said feature is blockchain-agnostic, meaning that any network is supported as long as the link originates from a partnered marketplace. In addition to their four partners, the number of marketplaces that are compatible with the feature also includes Ethereum, Solana, Flow, Polygon, Tezos, and Immutable X.

The aforementioned feature enables users to display their NFTs via a dedicated panel within a tweet. Additionally, users can click a button to browse the marketplace listing. The NFT Tweet Tile feature is still being tested by users on iOS and the web, the Twitter representative added.

Users do not need to be Twitter Blue premium subscribers to use the feature, and for a small number of users chosen to test the feature, the NFT Tweet Tile integration will be visible to them right away after logging into their accounts.

The CEO of Binance also mentioned that the company wants to combine social media and Web3 in order to increase the adoption and use of cryptocurrencies and blockchain technology. Earlier in the final week of October, the CEO of Binance reaffirmed that the company is honoring its commitment to contribute $500 million to Musk’s takeover bid for Twitter. highlighting how they want the agreement to act as a link between Web3 and social media

Recently, on October 27, Binance had already wired $500 million as part of the deal. Binance first disclosed their plans to invest in Musk’s acquisition of Twitter when it was still in the SEC filing in May of this year, where the CEO described it as “a small contribution to the cause.”

According to CNBC, many other investors in addition to Binance, who is taking part in this deal as an equity investor, include Sequoia Capital, Qatar Investment Authority, and Fidelity Management & Research. According to Forbes, Morgan Stanley, Bank of America, and Barclays were the main lenders who assisted Elon Musk in financing the deal, and each of them contributed at least $2.5 billion in debt financing.

After months of legal and public wrangling over the deal, Elon Musk was finally able to close out his $44 billion purchase of Twitter late on October 27. This was declared in writing when the CEO of Tesla and SpaceX tweeted, “The bird is freed,” and immediately fired a number of senior executives.

Twitter’s CEO Parag Agrawal, its CFO Ned Segal, and its top lawyer Vijaya Gadde were all swiftly fired by the social media platform’s new owner. These individuals were known to have played a significant role in the decision to ban the former president Donald Trump’s Twitter account in January 2021.

Elon Musk will take over as CEO despite it only being an interim position, according to a report. His next move is reportedly intended to reinstate the Twitter accounts of those who have received lifetime bans from the social media site, including Trump’s account.

Elon Musk said that, above all, the “future of civilization” is what drives him to make this purchase, and that his main objective is to preserve a “common digital town square” where people of different beliefs can openly debate and share their opinions without resorting to violence.

Additionally, it will reportedly be possible to combat Twitter spam bots by implementing blockchain-based solutions. This bot spam is reportedly very dangerous and also very common in the cryptocurrency community, where con artists created phony accounts of influencers and other well-known people to entice investors.